‘Godzilla: King of The Monsters’ Review: A Destructive Story

‘Godzilla: King of the Monsters’ is what you get when you have a series of A-list actors do their most typecasted and stereotypical performances, then let loose a series of gigantic monsters to fight in the backdrop. Entertaining, but pales in comparison to the giant fighting monsters. Though one thing is definitely for certain: this series certainly isn’t afraid to destroy everything — including its own story.

Written and directed by Michael Dougherty (Krampus), this iteration of Godzilla takes a step back from the more acclaimed series of the 2014 reboot, or another spin-off sequel set in the same universe ‘Kong: Skull Island’. Instead of focusing on character narratives or compelling motivations, what you have in this movie, is an homage to the Godzilla mythos: it’s longstanding cinematic history, and it’s even wider cast of monsters.

I think it’s beautiful that I can’t tell you what you anything about this film without first having some preconceived notions about Godzilla. Truly, this movie is such a fan service for those traditional Godzilla fans that it’s shocking the level of greenlighting that was made. I’m talking morphology of the creatures, their own zoology, mythological backstory, and special abilities. 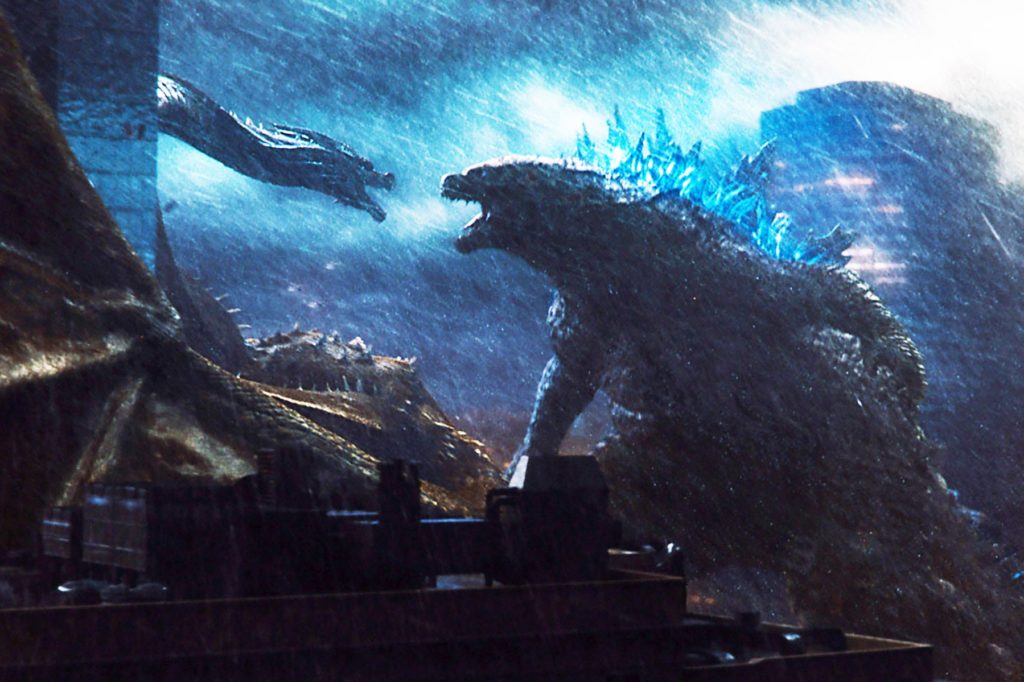 This is why you watch this film because the monsters are breathtaking.

Likewise, the battle sequences are epic. And everything regarding the creatures just looks fantastic. Plus, we get a special treat in that it’s some of the Kaiju favorites: Godzilla vs King Ghidorah. Rodan vs Mothra. We even get to actually know the between a few of these creatures and how they communicate. Minus the spoilers, there’s even a bit of… Kaiju romance? Or perhaps it’s a friendship? We don’t really know or care, we just like seeing these beasts share a screen.

‘Godzilla King of the Monsters’ features the Russell family from the first movie. Mark (Kyle Chandler), Emma (Vera Farmiga), and Madison (Millie Bobby Brown) Russell are a broken family as a result of the catastrophe at San Francisco. When Godzilla utterly annihilated the entire city, and the family had lost their son and brother. They soon find themselves involved in the Kaiju problem when giant monsters start awakening from Monarch controlled stasis cells around the world, as the ‘ORCA’, a device created by Mark and recreated by Emma after he’d destroyed it within the last movie, has become heavily utilized with the Monarch organization to control and awaken the creatures.  Monarch again services as the scientists who run the show, ones who’d tracked and kept Godzilla, along with the other mega-sized titans, a secret.

When a sudden environmental terrorist organization takes ORCA and the Russell family hostage, Mark has to return to the public eye and work with the Monarch organization to save his family, and by doing so, possibly save the world…

Look, I’ll be frank, a lot of the critics and fans alike mostly hated the plot of this movie, and I can’t blame them. It flip-flops and overexplains things for convenience, and doesn’t try too hard to really hook an audience nor surprise. However, we do get the best out of its cast which is weird to say… as a lot of them are known for their signature ‘thing’ and they don’t disappoint in doing that this movie.

Kyle Chandler will get upset, make bold statements, and rally both his team and family.

Vera Farmiga will go back on her word and betray a loved one, change her mind, and sort of redeem herself.

Millie Bobby Brown, will scream a bunch and be a tortured young teen, who’s complex yet kick-ass.

Ziyi Zhang will make an offhanded comment about honor and Asian history.

Thomas Middleditch will be in an award position of authority.

Ken Wanatabe will pronounce the word Godzilla as ‘Godjira’ with a thick accent, and then go crazy with praise over the creature like most of Japan.

Charles Dance will be Tyrell Lannister yet again, then forget why he’s in this movie.

And O’Shea Jackson Jr. is going to remind everyone that he’s more than Ice Cube’s son, by playing a black soldier, a role his father Ice Cube is often pretty well-known for playing. 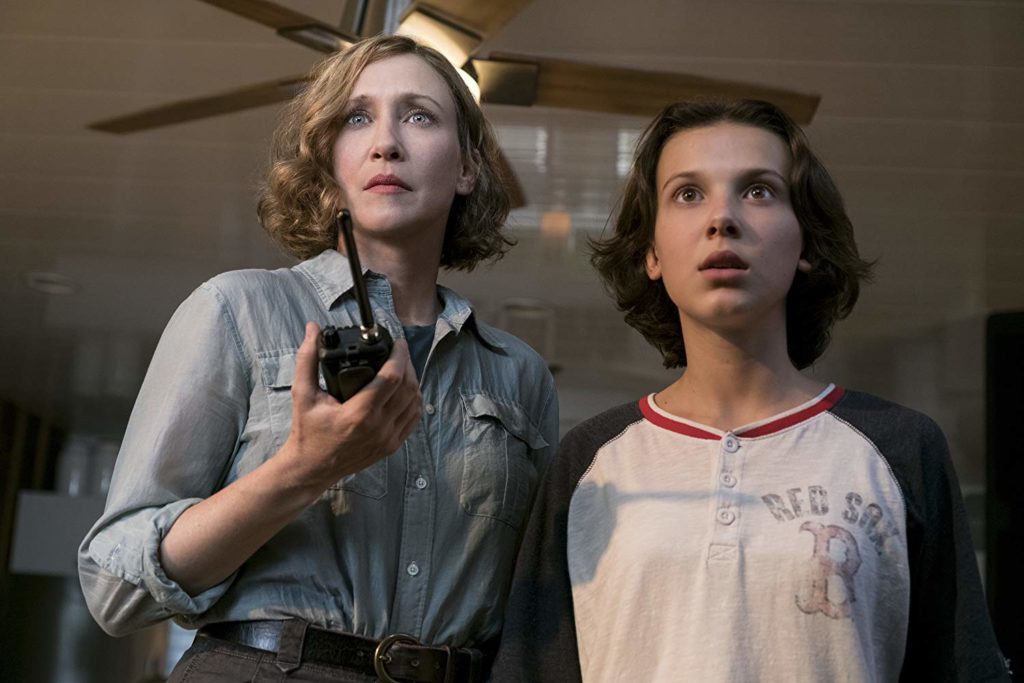 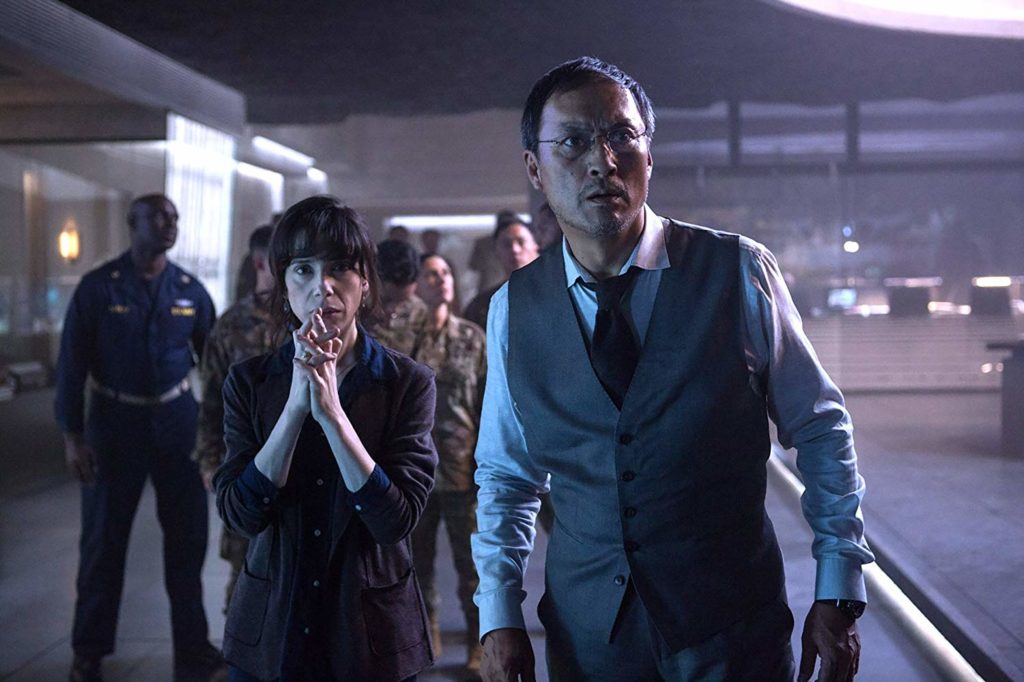 And I can continue but I think you get the point. The problem is the story. The script is very lazy. It’s a lot of explaining and exposition to fit in these signature moments listed above, which if you haven’t noticed: is all typecasting. It’s the roles that each actor is somewhat known for. The script goes everywhere to fit these beats in and it’s incoherent but sets up enough for the epic battle Kaiju sequences.

Plus you get to see your favorite actors basically do their catchphrase that’s not a catchphrase.

It’s Giant monster battle fighting featuring a cast who do all your favorite things. I don’t think the movie is meant to be taken too seriously. If anything, the monsters are the true stars.

You can watch ‘Godzilla: King of The Monsters’ in theatres right now