‘GLOW’ Season 2 Review: Women and the Workforce.  Wrestling, too.

Netflix’s Gorgeous Ladies of Wrestling, or GLOW for short, is probably the best thing I could recommend on Netflix in 2018. It’s not only a dramedy self-parodying 80’s nostalgia and the soap opera nature of wrestling, but it also stars a fantastic ensemble of women. Whose talent and range of cultural representation is remarkable, akin to the hype of Netflix’s other hit Orange is the New Black.

Season 2 of GLOW continues to excel expectations.  With critical accolades all around, it’s only comedy competition this year seems to be from Dear White People and One Day at a Time. Both Netflix shows also in their second season. All three with a perfect score on Rotten Tomatoes.

Suffice to say, GLOW is a rather funny show. One with strong female characters, a cheesy 1980’s backdrop, and a whole lot of prominent messages about women. Particularly, women in the workforce.

The following is a review of Season 2.

Between GLOW and Stranger Things, Netflix seems to have a thing for stories set in the 1980’s. Featuring music videos shot in shopping malls, neon shoulder-padded jackets, and twilight hour aired cable television – GLOW is not shy about its passion for the age of spandex and hairspray. 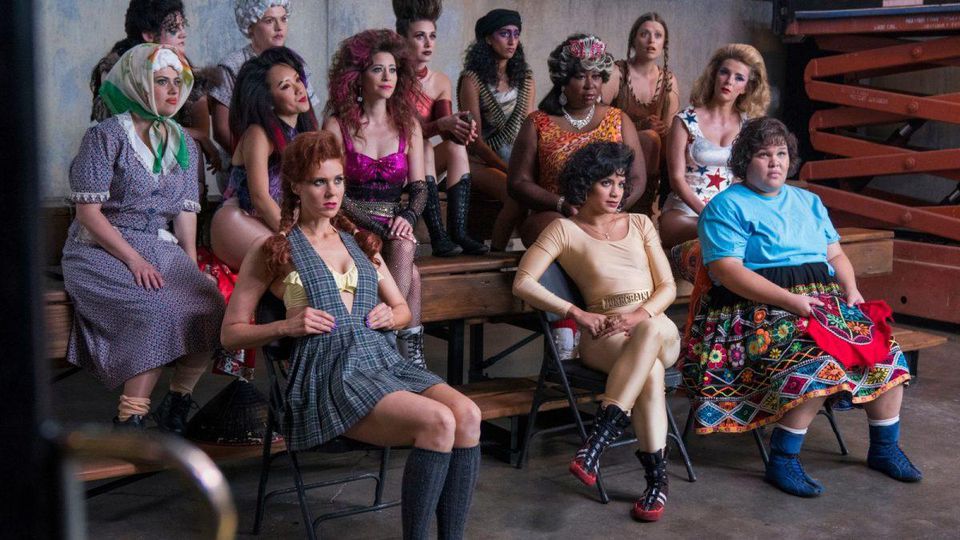 Which is important because of GLOW’s critical timeline. Women in wrestling? Not an easy pitch to sell. Personally, I still have many friends who refuse to watch because it sounds like extremist feminist drivel to them. Or on the opposite spectrum, refuse to watch because of their remembrance of the over-sexualized and poor treatment of women in the wrestling industry.

(If you’re one of these people, I’d suggest watching the first few episodes of Season one. The show does a very good job of addressing both sides of the issue early. Mostly through good storytelling.)

Now a story about feminism, about women making their own break in the entertainment industry, set in the 1980’s against the debonair of sleazy trump era (pre-presidency) toxic masculinity?

That is what you get with GLOW. A reexamination of women in entertainment. 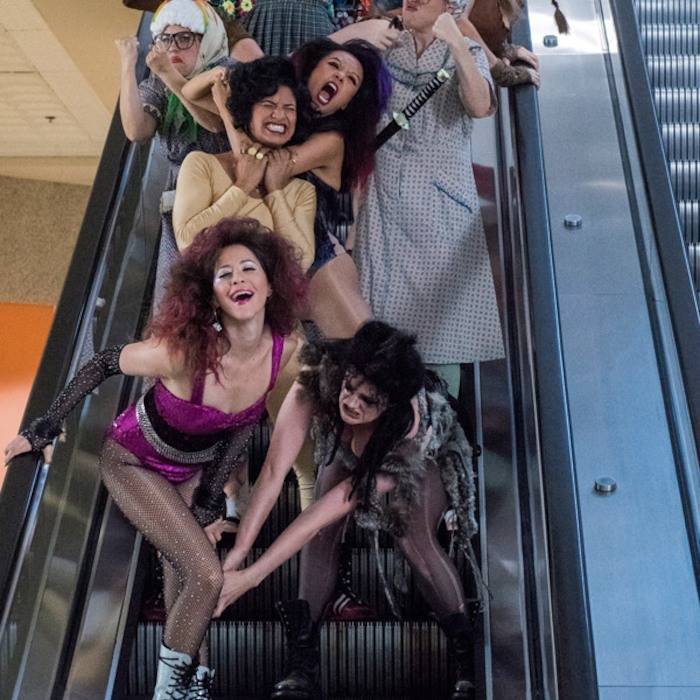 Season two expands on season one. While the first season saw our heroines up and at odds against each other, competing for their roles and accentuating their voices on a platform (wrestling) that very much encourages them to do so, season 2 sees our team up against the 1980’s era itself.

Stories about what it’s like being a woman and trying to succeed in male-dominated industries.

Whether it be in the role of the working mother, the divorcee trying best to keep the strength of appearances, the director of reason getting shafted due to her being a woman, or just the need to find a balance between work and romance; there is so much story about the struggle of the working woman.

And season 2 does a great job of telling it.

It starts off by first showcasing the difficulty of producing a low-budget cable access production. In this case, a women’s wrestling show on at 10 AM in the morning. The first half of the season finds GLOW searching how to move all the pieces, grow an audience, and establish an identity.  All while trying to appease sponsorships and handle pressure by sleazy producers.

The second half then delves into the struggles of keeping the said show alive. How to overcome difficulties such as a loss of funds or a shoot gone awry when things go off scripted or not according to plan. There’s even a bottle episode focused on what happens when one of the girls get hurt.

There has been hype about this season regarding an all too real #MeToo moment within the show. What’s compelling, is that actions have major ramifications. The dialogue doesn’t steer clear of the issue, it addresses it, in what marks some of the most powerful moments of season two. GLOW doesn’t steer clear from the gritty aspects of show business. It showcases the inequality and sexism, and then tastefully finds a way to begin a dialogue. Maybe not always directly, though definitely through its comedy. It’s a harsh look at the weighted difficulty women face in the entertainment industry.

Season 2 makes its a bold #MeToo statement that’s relevant. Though it also balances well, the line of seriousness and silliness, while not overdramatizing its comedic themes. 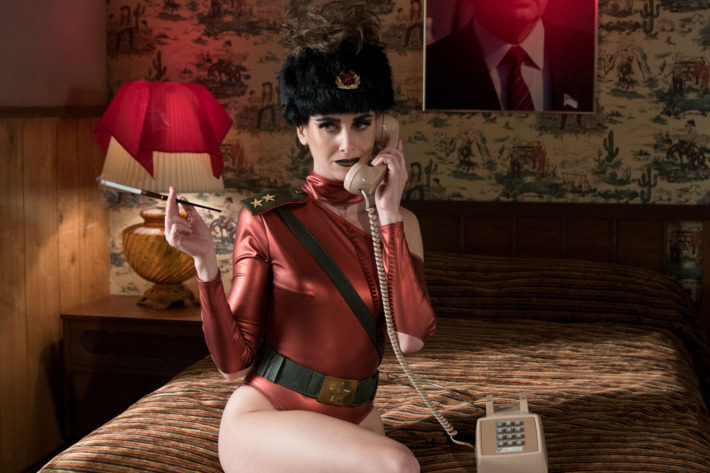 Let me be frank: We’re well into the golden years of television. There’s a show for just about everything. It takes a lot to be creative in the current TV limelight. Which is why most shows need to go above and beyond to capture an audience. Do something different.

Which is why I say, with much applause, that episode 8, “The Good Twin,” deserves its own sort of nod.

In it, Alison Bree’s character Ruth, who plays “Zoya the Destroya” has a secret twin, trying to amend the mistakes of her evil counterpart’s kidnapping of Betty Gilpin’s Debbie, who plays the lead superstar wrestler “Liberty Belle”. We then go on a winded but very funny low budget movie about redemption and cheesy 80’s nostalgia; filled with advertisements, music videos, and cheesy plot points in the stylings of a low-budget tromaesque B-movie.

We also see separate B-stories for all the girls. The episode is very much a hard reset. A one-off with little at stake, that shows character and just how far off the deep end the series can go before rubber banding back in a juxtaposing, slapstick sort of way.

It’s a very bizarre break in the series, especially for an episode-long parody of 1980’s tv tropes. But it works. Not only in the bit, but also in the storytelling of both the women in the show and the characters that they play as. It’s a meta-comedy within a meta-comedy.

Besides that, the show, again, has done a great job with costume and set-design. And if I haven’t mentioned it, the wrestling choreography is on par. Technicality it’s progressing steadily on pace with the skillset the actresses should have. It’s evident that the women have become better at wrestling, though still, are not perfect. With a very prominent episode mid-season showcasing that struggle of building a physical skill until, well, you break it. But see what I mean for yourself.

Just like Liz Flahive’s Orange is The New Black, the female ensemble for this show is impeccable. With tremendous effort into showcasing a host of women from different origins stories.

What’s more surprising, is how delicate they handle its more ostentatious, and slightly offensive, stereotypes. It’s less tasteful elements of character, such as a middle eastern wrestler portrayed as a terrorist, or a black wrestler villain known as ‘Wellfare Queen’, are all examined within a contemporary cultural limelight. Letting the audience in the joke, but also letting them judge for themselves just how much has America changed?

Though the 80’s were far from innocent, it was also, empowering in its own non-conventionalism. GLOW is very much a series about low brow entertainment, but also feminist empowerment. And it’s done so through the ironic lens of the past. With this season’s ensemble often utilizing themes of feminism and women at work. 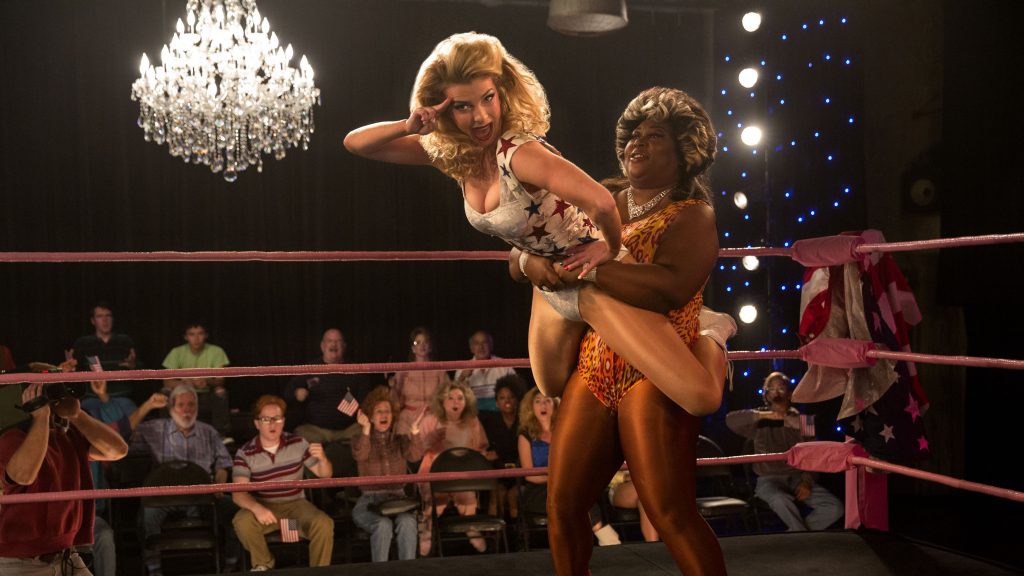 For example, both Debbie and Tamme are seen before their title match, as struggling working mothers. Adding a layer to an unrealized depth between the relationship of the two women. Sydelle Noel’s character Cherry, arguably the best stunt coordinator on the show, sees herself falter when given one of the few coveted roles as a woman in the industry: co-lead in her own series. Likewise, Ruth, shows promise in directing yet is marginalized by her male cohorts, just as Debbie shows promise as a producer yet is… also marginalized by her male cohorts.

Which is funny, because when you look at Mark Maron’s Sam Sylvia, or Chris Lowell’s Sebastian “Bash” Howard, they’re not bad men. They’re just men that are a product of their era. Who by comparison to some of the other men on the show, seem like saints in comparison.

One interesting turn this season is Sam’s character playing the role of dad, as per the twist reveal near the end of season one. We see this usually gritty and grumpy character, take a softer tone as the series wears on. Establishing a budding partnership with Ruth, though in what capacity, we’ll only be certain of later.

The point is, the characters in this season are very strong. Their personal storylines, layering an already well-established world of grit and feminism – above all else, gumption in trying to make or break it.

Overall, GLOW is back and better than ever. It feels proper. The series, really delving into this world of wrestling, entertainment, and characterization. This season, we see the girls operate at high levels of engaging entertainment, using every sleazy wrestling and soap opera like trick at their disposal. There’s a bit of dark humor, some tiny budding romances, a good amount of growth, a gross amount of fun, and above all else, a whole lot of entertainment.