DORNE! IN THE INTRO! Now it’s long enough to do that 8-minute workout I’ve seen people raving about on Facebook. Not that I’ll do it, but it’s nice to have the option.

Here we are, almost to the halfway point of the season and still there is no winter, no wars, and very little dragons. There is, however, an abundance of murder and boobs, so we know it’s still Game of Thrones. In “Sons of the Harpy” we follow the wrath of the women in Game of Thrones; from Cersei’s institution of the Faith Militant, to Margaery’s rage over her brother’s imprisonment, to Melisandre’s anger over being spurned by Jon Snow (and saying the line!), and Ellaria’s need for revenge against the Lannisters. I also have no doubt we are building to see the wrath of both Sansa and Daenerys, so hold on to your butts, people.

ESSOS – Somewhere in the water outside Volantis

Oh, hey, look! Jorah’s lost most of his morals and steals a boat so he can sail back to Meereen. Along the way, Tyrion annoys the scorned knight with a muffled rendition of Hot Cross Buns, so Jorah tells him they’re going to Daenerys and Tyrion has a good laugh over the irony of it all. Then Jorah then helps Tyrion sleep without wine. Their banter isn’t nearly as exciting as that between Tyrion and Varys, but it’s nice having Jorah back, kind of. I mean, he’s become a bit of a jerk since he started frequenting brothels with Dany look-a-likes. And he’s a lot more delusional. 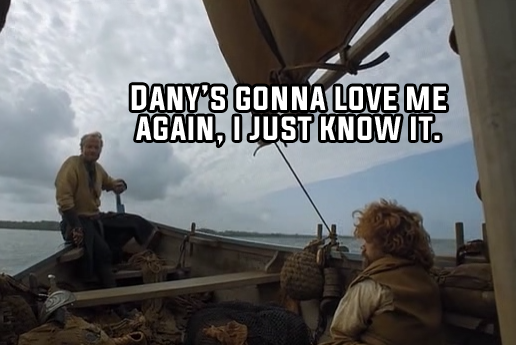 On a much larger boat, Jaime and Bronn travel to Dorne, but not before sailing by Tarth so that Jaime can wistfully gaze upon it and daydream of Brienne. I assume. Bronn asks why Jaime is there and he fumbles through some answer about rescuing his niece and not wanting to start a war. Bronn doesn’t buy any of Jaime’s story, but decides he likes gold more than the truth, so he lets it go. 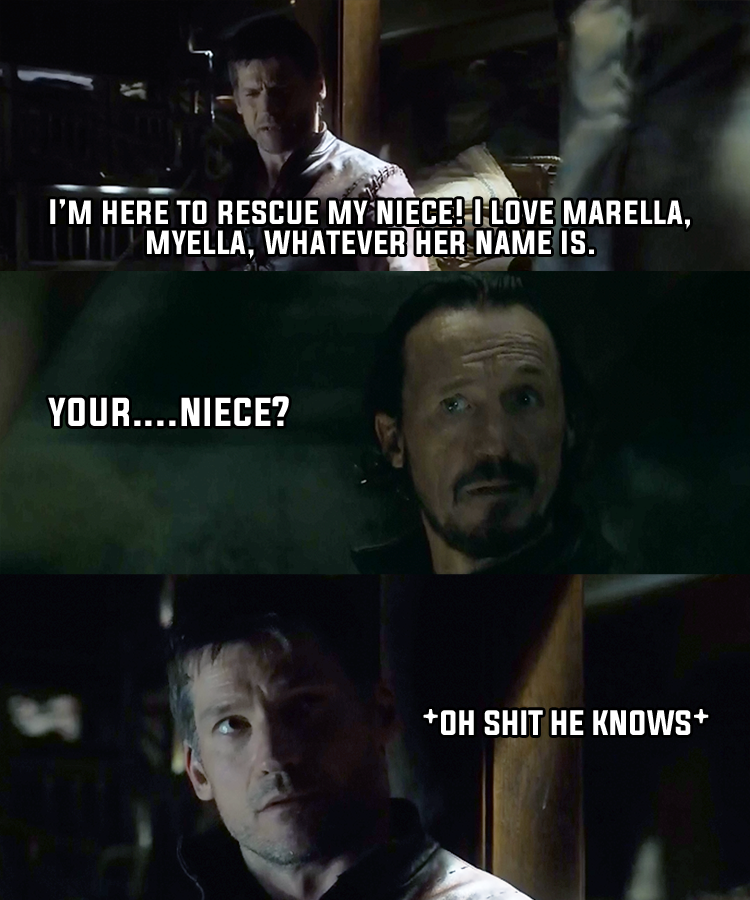 Bronn decides to change the subject to the only thing the two have in common: Tyrion. This upsets Jaime because even though he disliked his father and loved Tyrion, revenge is more important so if he ever sees the Imp again, he’ll split him in two. Note: listen to the music when Jaime tells Bronn he’ll send Tyrion his regards.

Jaime and Bronn then “row” into Dorne and Jaime makes the rookie mistake of trusting someone he paid. Then he goofs up even more by opening his mouth in front of a few Dornish riders and Bronn is all, “Are you serious, man? I’m trying to lie us into safety and you are like one-tenth as smart as your brother. SHUT. UP.” It leads to a bloody confrontation that makes Bronn question for the hundredth time why Jaime had to come along.

Also in the land of sand and snakes (HEH), Ellaria meets with Oberyn’s daughters, the Sand Snakes and plots how to start a war. She isn’t very subtle about how she intends to do it, either. (Hint: Jaime’s “niece.”) They then find out that Jaime Lannister is in Dorne to rescue Myrcella, so they are forced to rush their plans. Two of the Sand Snakes are in, but Obara spends these crucial moments taking a forced trip down memory lane to tell us why she eventually says yes to Ellaria’s plan.

At the Small Council, Mace Tyrell is an oaf and Cersei quickly gets rid of him by sending him as an envoy to the Iron Bank, courtesy of Lannister Travel Agency. Ser Meryn fucking Trant is his escort because the Lannisters spare no expense when it comes to getting what they want. Two guesses as to how that plays out for Papa Tyrell. Cersei then meets with the High Sparrow and institutes the Faith Militant, giving all of the Sparrows fancy new black robes to cover the darkness in their hearts as they destroy everything King’s Landing loves: sex and wine. Ser Loras Tyrell is arrested as a sinner and Margaery doesn’t even try to hide her anger. Tommen acts like a child, completely ignorant of Cersei and Margaery’s hatred of one another, because like a Hobbit, the only thing he cares about is breakfast. 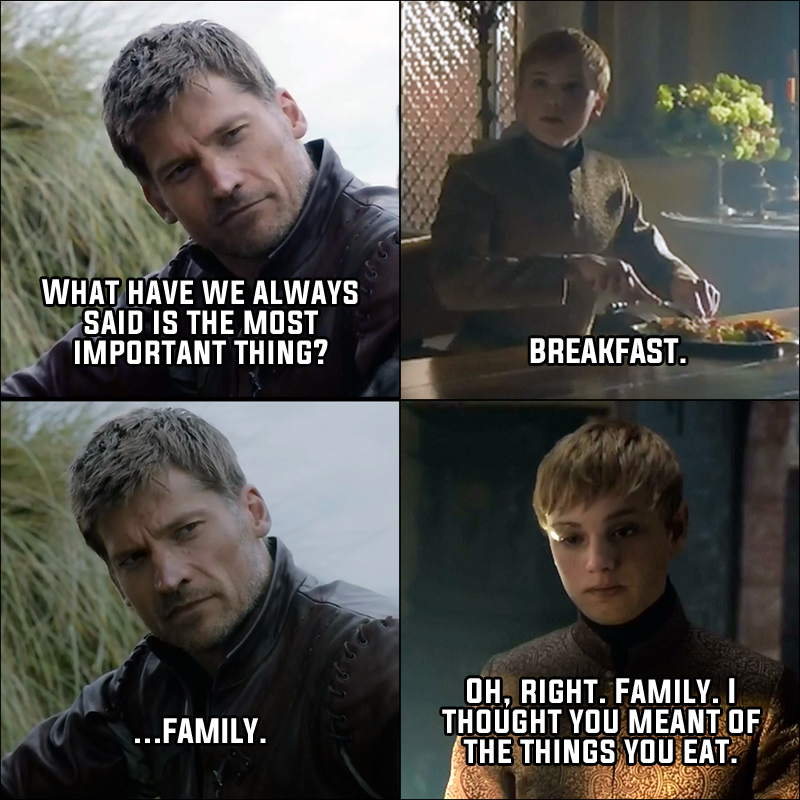 Is it scary to think that Joffrey would have already rid King’s Landing of the Faith Militant? I almost wish he were still alive to see his confrontation with them outside the Sept of Baelor. Almost.

Stannis needs to march on Winterfell, and for that he also needs a larger army and the support of the Night’s Watch. Jon needs men for the Watch, which means asking for help from the likes of the Boltons, and a few other lords he’s never heard of. Melisandre needs….a few other things. 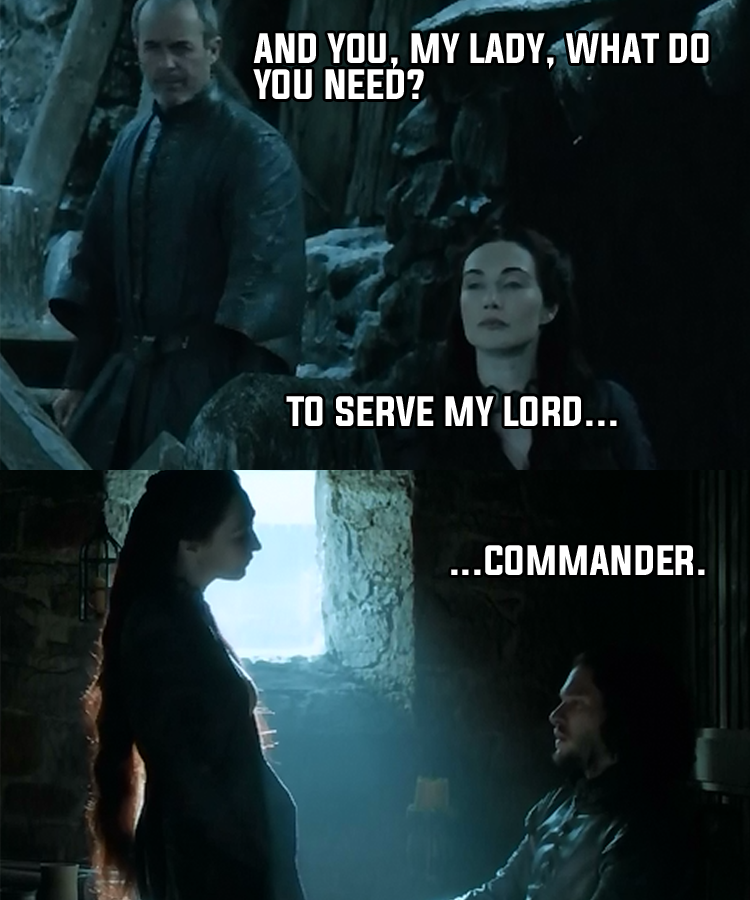 After that incredibly awkward boob stare and grab, Jon reminds Melisandre that there’s only room in his heart for one redhead.

But the best part at Castle Black was the scene between Stannis and Shireen. I’m sure that these scenes hold little weight for the story at large, but I love Shireen. She is one of the truly kind people on the show and for Stannis to defend her, show her he loves her, and prove that he wants her around, well that just adds another ten points to House Stannis. Look at that little girl smile. HOW CAN YOU NOT LOVE HER, SELYSE YOU MONSTER.

Sansa visits the crypts underneath Winterfell, because only good things happen down there. Naturally, Littlefinger follows her down there and then tells the story of the Tourney at Harrenhal, reminding us that Rhaegar and Lyanna caused Robert’s Rebellion. More importantly, Littlefinger continues to play the part of the creepy uncle you don’t sit next to at family dinners. Littlefinger thinks Stannis will take Winterfell and save Sansa, making her Wardeness of the North. Aaaaaand awkward kiss. That’s enough of that for tonight.

Barristan Selmy and Dany share a sweet moment reminiscing about Rhaegar, and that’s the second time he’s been discussed this episode. However, what concerns me more is the genuine smile Dany gives the old knight because that’s how you know things are about to get ugly. Any time someone seems happy, they get stabbed. Daario interrupts their bonding moment, only to be reminded that Dany doesn’t pay him to think. 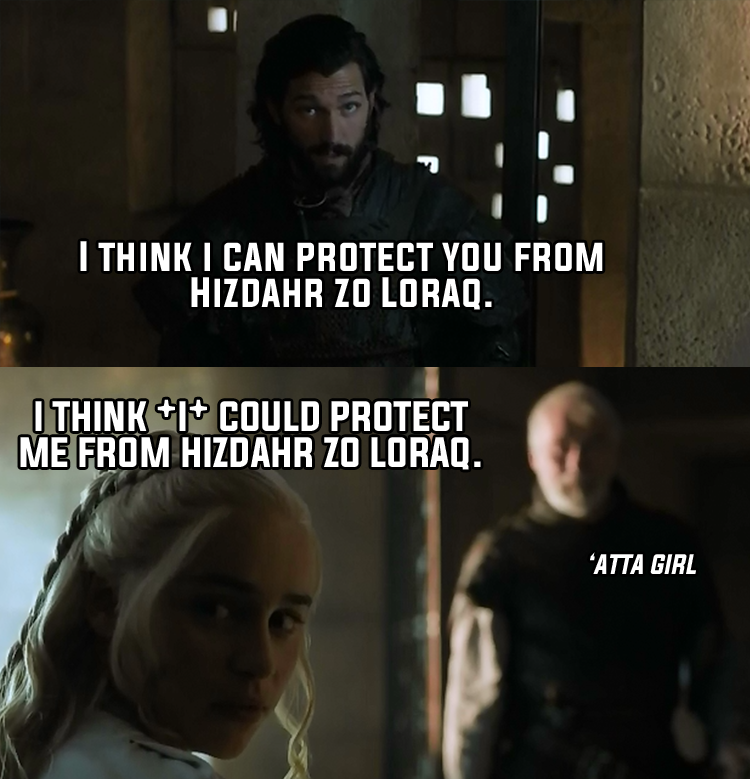 Hizdahr pleads his case for opening the fighting pits for tenth time this season and Dany reminds him that killing men for sport isn’t kosher. As Hizdahr makes his stirring speech about the slaves becoming infamous through death, the Sons of the Harpy lure Unsullied into a dark alley and start their our version of the fighting pits. The Unsullied surprisingly get man-handled pretty well considering they’ve been trained to fight since infancy. Barristan comes across the alley fight just in time to end it, but not before falling to the ground next to a very bloody and defeated Grey Worm.

It would have been hilarious if the person Jorah beat up for the boat was Gendry. Huh? HUH?! AMIRITE? Just me? Okay, then.

Littlefinger is super creepy, right? I’m scared for Sansa, but I don’t know if I’m more scared for her with Littlefinger or with Ramsay. Just kidding. Ramsay is terrifying. But seriously, for a guy who claims to know how to play the game, Littlefinger doesn’t know as much about people as he thinks he does.

Is Barristan going to die? IS GREY WORM GOING TO DIE? I can’t handle this. Why would you do this to me, HBO? (I just watched next week’s trailer and I HATE YOU, HBO.)

There were a few references to a theory about Jon Snow’s parentage this week, including the flashback all the way back to the first season with King Robert at Lyanna’s grave. If you’re interested, you can highlight this bit of text (spoilers, kind of?):

The theory is that Rhaegar Targaryen and Lyanna Stark are actually Jon Snow’s parents, not Ned Stark and some woman he met on the road.

At Castle Black, there’s the conversation between Stannis and Selyse:

“You think highly of this boy…the bastard by some tavern slut.”

Then again, in the crypts of Winterfell, Littlefinger tells the story of the Tourney at Harrenhal, where the spark that led to Robert’s Rebellion began–Rhaegar’s kidnapping and raping of Lyanna Stark. And even later, Selmy, a man who seems to have known Rhaegar better than anyone tells of his true nature as a singer and an intellectual who gave to the poor and loathed fighting, so he’s probably not the kind of guy to kidnap and rape a woman he finds beautiful. Food for thought.

@theworkprint
Follow
Previous article‘Outlander’: “The Watch” – All the Devils are Here
Next articleSyfy Greenlights Lev Grossman’s ‘The Magicians’