‘Furious 7’ Review: Dumb as Hell, But Has a Lot of Heart

Furious 7 was already highly anticipated simply because the awesome stupidity that was Furious 6 proved that Fast Five wasn’t a fluke and that the Fast and Furious franchise that was mocked or regarded as a guilty pleasure at first had heart and charm that kept people coming back for more. But in the aftermath of Paul Walker’s tragic death and the fact that the film was unfinished when it occurred, people have been wondering for months now how it would handle Walker’s death and his character, Brian O’Conner, in particular.

To answer that question upfront, Walker’s two brothers Cody and Caleb were used as physical actors while Paul’s face was CG’d on later. This is mainly noticeable at two quick moments around the second act, otherwise I was unable to tell the difference, though they do have some wide camera shots at the end as well.  While the film does feel like it’s doing a bit of the Hot Tub Time Machine thing where it’s hanging Brian’s death over the audience like a sadistic joke, they ultimately pay tribute to him in a way that’s moving and perfectly done. Like Vin Diesel’s Dominic Toretto has said for the three or so films now, him and his crew are a family and the film overall, though most noticeably in the final moments, does a great job of showing that these people are a family. 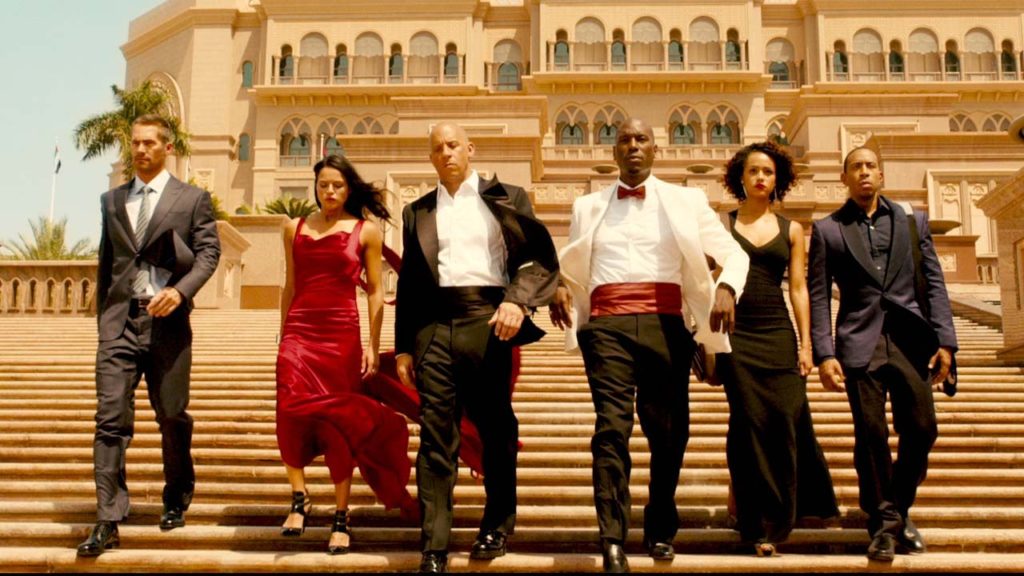 Said family under attack is what gets Dom, Brian, and the rest of crew back into the game. Furious 6 ended with the group having defeated baddie Owen Shaw. This time around Shaw’s older brother Deckard (played by Jason Statham at his most Jason Statham-y) breaks into the DSS offices, brutally takes down the Rock’s Agent Hobbs and starts picking off the team one by one. The film picks up right around the time that Statham was killing Han in Tokyo Drift, and after a close encounter with Shaw, Dom and crew are recruited by Kurt Russell’s Mr. Nobody to retrieve a hacker and her powerful tracking program from a mercenary group led by Djimon Honsou.

Each Fast film has had their own feel and style; the first was an undercover cop drama, Tokyo Drift was about a stranger in a world completely foreign to him, and Five was an Ocean’s 11 bank heist caper, and so on. With Furious 7, things have gone to a more Mission Impossible affair, with tactical squads, the people in Dom’s team working like a unit with each person having their own objective, traveling to exotic locales, and the like. It certainly doesn’t make things boring, and the dynamic between the team and their various skills makes the whole affair entertaining. You have to respect a series that can switch up their style with every new film while also keeping its identity along the way.

Everyone who’s been around since the last one is basically doing the same thing they did the last time around, though it does feel like the dialogue between Tyrese Gibson’s Roman and Ludacris’ Tej could’ve been trimmed down a bit. Gibson in particular has a line during the crew’s trip in Abu Dabi that feels like it should’ve been cut because of how sketchy it sounds. Sadly, the film doesn’t have as much of the Rock as the last two films, though his natural charisma makes him awesome when he does show up.

The new additions to the cast are all entertaining, with the standouts in particular being Tony Jaa and MMA fighter, Ronda Rousey. Jaa in particular brings such power to his role that you wish he stuck around and joined the team. Kurt Russell is hamming it up as Mr. Nobody in the same way that Nicholas Cage was hamming it up as Big Daddy in Kick-Ass, and I really hope he comes around for another one of these.

Jason Statham’s role as Deckard Shaw feels similar to the Winter Soldier of the recent Captain America film, mostly showing up at random intervals as more of a force of nature with no real explanation as to how he ended up in the same area as Dom’s team besides maybe having some ability to track down Dom through his scent. He definitely makes an impression, even though the film does sort of cheapens the outcome of his and Dom’s fight at the end.

Djimon Honsou does alright as the villain, which is really all you can hope for with the villains in these films, and while Nathalie Emmanuel’s hacker Ramsey is mostly regarded as an object others want (Michelle Rodriguez’s Letty rightly calls out Roman and Tej for calling “dibs” on her), she does well with the material she’s given.

Rousey, Jaa and Statham being added to the cast also seem to have ramped up the action scenes and their brutality. While the fights don’t get anywhere close to The Raid’s level, there’s still plenty of times you’ll be going “oh shit!”. Also ramped up are the crazy stunts the series is now famously known for. The marketing for the film has annoyingly shown off the scenes with the parachuting cars and the building jumping, which lessens the surprise of them, but those are just small parts of those batshit scenes. James Wan certainly knows how to direct these big scale sequences, and he definitely is content with just letting them speak for themselves.

Overall, Furious 7 is a fun entry in a constantly entertaining series. It manages to stand out well enough on its own. There are some weird leaps in story logic and it feels like it’s hanging Walker’s death like a carrot on the end of the stick, but it deals with the latter in the best way possible and it’s more than satisfying of a way to put his character to rest. Sure, these films are stupid as hell and get more cartoonish with each one, but you can’t deny that these films have a lot more heart than you would expect from a series about people driving fancy cars.

@theworkprint
Follow
Previous articleCelebrate the Release of ‘Furious 7’ with The Rock Lip Syncing “Shake it Off”
Next article’12 Monkeys’ Recap: A Tale of Two Coles