Review: ‘Fahrenheit 451’ Fizzles in its Message

Adapted from the Ray Bradbury science fiction classic, Ramin Bahrani’s ‘Fahrenheit 451’ fails to compel as a cautionary tale. Relying too much on outrage of the modern zeitgeist, whose messages of desensitization through social media and addiction to a constant bombardment of entertainment, feels awfully ironic for a movie most people streamed on their digital devices.

But that’s okay because you can ironically tweet about it using #Fahrenheit451. 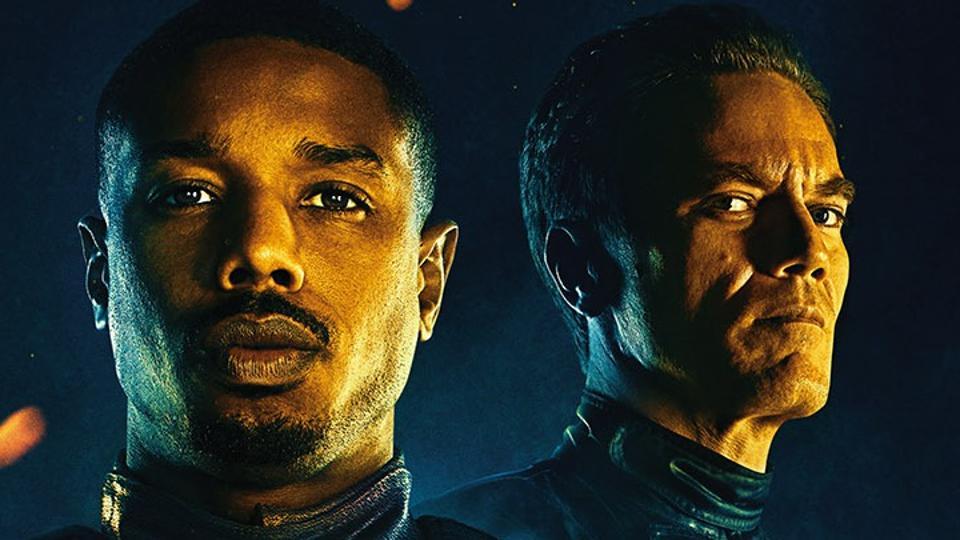 Fahrenheit 451 is the story about Guy Montag (Michael B. Jordan), a firefighter who starts to question his meaning in life, and his soon to be retired mentor Beatty (Michael Shannon). In this world, firefighters are used as information police, employed to burn and delete all person related information that entails human expression or philosophy. This includes music, literature, or any form of artistic expression that allows people to think freely.

On one mission, Montag gets disturbed by a particular patron met at a book burning. Whose subsequent sacrifice leads Guy to start questioning his beliefs. This gets him to indulge in some forbidden literature, and leads Montag on a journey to find the Eels: rebels dedicated to the preservation of books. There, Montag meets Clarisse (Sofia Boutella), who unlocks the secrets behind the Eels and Guy’s heart.

Suffice to say, the book is much better and there are a lot of critical pieces that were cut from the film adaption. Though there are several engaging elements of the movie.

For one, the world is well-designed scientific noir, with stacks of artificial lighting illuminating the contrasting darkness. It’s a popular stylistic trope in modern sci-fi. Very in tune with a Blade Runner sort of color palate.

In addition, the acting is about as good as can be expected. With a compelling Michael B. Jordan utilizing some of that passionately defiant demeanor, reminiscent of his performance in Black Panther. His mentor/the villain of the story, Michael Shannon, similarly tries his best to be menacing – albeit can come across as a one-dimensional. His only goal seems to be recruiting Guy as his replacement for retirement, and upkeeping the status quo.

Though he also for some reason, really likes secretly writing forbidden poetry. In an odd attempt at creating layered contextuality for a rather simplistic, fascist-like enforcer.

Both actors do their best with the material. The problem, unfortunately, is the rest of the movie, which falls on the shoulders of first-time big budget writer/director of this film: Ramin Bahrani.

If you don’t know Ramin Bahrani, he’s an Iranian American film director beloved in the Independent circuit who teaches directing at Columbia University’s graduate film program, who once made a short film narrated by Warner Herzog about the adventure of a plastic bag blowing in the wind.

Now, what’s wrong with this rendition are the changes Bahrani implemented made to keep ‘Farenheit 451’ culturally relevant. The director’s commentary on social media and group-think fanaticism greatly overshadows Ray Bradbury’s unique tale regarding censorship and fear in the rise of TV over the novel.

His critique is directed through the script’s vicarious use of technology in a toxic manner, in a similar vein to the British TV show Black Mirror.  Incorporating conventions of an internet called The Nine, which replaces words with images and pictures, an Alexa-like smart device called Yuxie, which equally hinders through censorship and surveillance as it does help via it’s smart functions, and above all else, live streams the firefighters burning books – an allegory to social media obsession – with emojis and real-time feedback from the general audience.

All of this is meant to reinforce the loss of self-identity and freethinking to the grand collective. The problem, is that society today is more complicated than the movie gives credit. For every indulgent snapchat, is a wise website’s blog. Every smart device, the utility of manners of communication never heard of. With every emoji filled chatroom, the occasional integral thread of perspective that can change everything. The movie is so convinced in selling a narrative about how technology is making us mindless zombies yet neglects entirely how it can be used for specialization of communication.

It’s a simplistic take on a very divided subject, especially in today’s climate.

The script was also loaded with the usual Hollywood clichés. Including, though not limited to: a forced romance incentivizing our protagonist to make a lifestyle change, less than subtle allegories tied to excessive burning of art, and a police force cooperating more like something out of full metal jacket than a realistic future dystopia. Which is to say they are nothing more than trigger happy grunts.

What truly befuddles me personally, was why burn that which you can sell out of style? Classic works of literature today already have become overshadowed by seasons of TV shows. I can’t tell you much about Nick Carraway, the protagonist in ‘The Great Gatsby’, but I can talk for hours unending about how awesome Tyrion Lannister from ‘Game of Thrones’ is.

The movie script misses the mark on addressing the evolution of stories; that the all-encompassing and ever-purifying fire, would need to aim at the roots of. Which is not limited to just art and books, but the people, overall. Which is what the Eel rebels represent in the story. The nerds of their culture. The movie just does a horrible job of layering the Eel’s story.

All-in-all though, the movie message is endearing and culturally relevant during a time of hyperbolic ennui. In a time where everything is based on fear, sensationalism, and the need of an audience’s approval, Fahrenheit 451 could have made a statement. Criticizing moments that constantly needed to be reified in seeking of approval, and on a scale of 1 to 10 in American culture, usually played 11 to desperately keep an audience’s attention.

Instead, we got something silly out of the need of subtlety, logic, and above all else, reason.