Okay, I have a very obvious question on my mind as we enter the second episode of Empire. Where in the hell is Rhonda’s funeral? Now, I understand that she wasn’t as particularly valued as other characters, despite how loyal she was to the Lyon family, but if she crash lands onto a car, the least a writer could do is throw in a quick funeral scene with the family in tears and Boo Boo Kitty wrecked with guilt over where this has gotten her. I really had to get that off my chest.

Okay. Back to the current situation.

“Sin That Amends” throws us right back into the cyclone which is the Lyon family and their drama. Unlike the season premiere, where every scene felt like it was trying to one up the previous scene, for the most part, the second episode plays itself nice and calm. Lucious is back to wooing Cookie, in hopes of getting in her good graces. For as much of a devilish character he portrays, there is an irresistible charm to Lucious and an authenticity that makes us feel as though he truly does care for the Cookie Monster. Despite this, his actions previously have left us wondering if his business or the love he has for Cookie comes at #1 to him.

While Anika is dealing with motherhood and all of the rules and regulations that are enforced on her within the Lyon mansion, Andre’s episodes feel like an entirely different show. The transitions are frightening and once again prove that Trai Byers and his acting chops overpower most of the talents on the soap opera. The handling of mental illness and the impact of Rhonda’s death on Andre is weighted heavily and each moment outside of this where the characters are focused on other shenanigans, almost feels like a disservice to their son. 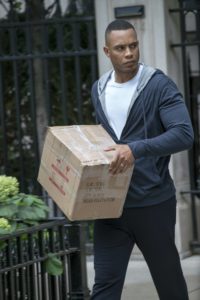 Thankfully, we’re treated to an extended scene towards the end with the brothers coming together to support Andre through his grief, with them all acknowledging the chaos and confusion surrounding their lives.

Taye Diggs makes a bigger impression this episode as a city councilman named Angelo, who is just as pretentious and arrogant as any other character Taye Diggs has ever played. This makes for a great foil for Cookie, though by the climax it seems to be leading closer to a flirtation that may leave Lucious a bit perturbed at the very least. Angelo’s character also sparks a need in Jamal to embrace the issues he’s facing dealing with PTSD from the shooting at the hands of Freda Gatz. It’s greatly appreciated that he understands how her shooting was just a symptom of a larger issue at hand and Jamal being the patron saint of change on this show, makes him the perfect person to call this to attention.

It’s worth noting that the second episode was less focused on the music and more about returning back to the foundation of the characters and the storyline. While the involvement of producer Darkchild, responsible for hits for Destiny’s Child, Brandy and Whitney Houston, is a welcome change this time around, I hope we continue to see less music and more actual dialogue. This allows for secondary storylines such as the one involving Becky and her rapper boyfriend (long overdue for an update) to shine brightly.

At the conclusion of “Sin That Amends” we’re left with what could be perceived taking advantage of the national landscape of society right now – a police brutality incident involving Andre. Now, being fully aware that this won’t end up where it has for so many including today’s most recent, Alfred Olango in California, the scene was triggering on many levels and left a sour taste in my mouth. Hopefully, the writers understand the gravity of the situation and handle this better than they have other incidents involving Andre. Bringing reality into a soap opera can ultimately prove to be unsatisfactory especially when mishandled.