In a game like Dungeons & Dragons, imagination is key. On the fly, you have to be able to decide how best to stop a band of slavers after you’ve been tossed in a dungeon naked, all the while actually sitting around you dining room table with four of your friends. Sometimes it’s difficult to imagine you’re actually shooting a fireball at a %&$#ing Mimic when Carl won’t stop playing Black Eyed Peas’ “I Gotta Feeling” next to you.

That’s where Elderwood Academy comes in. While they can’t stop Carl from being obnoxious, they do have an array of accessories to help make your game night a more immersive, and cool, experience. Besides, if you show up with one of their goodies, I’m pretty sure you’ll make Carl envious, and is that all we want in life: to make Carl miserable?

Elderwood Academy has three main products they offer: Hex Chests (storage for your dice), Spell Books (to hold Magic: the Gathering decks or other necessities that can be customized with foam inserts), and the Scroll and Codex, which is currently on Kickstarter.

I had a chance to sit down with the guys behind Elderwood Academy, Dan Reiss and Quentin Weir, to make sure they were as nerdy as their finely crafted collectibles suggested.

Sooo…how did you two meet? Tell us about this whirlwind romance of yours.

Q: We met through a mutual friend, Allison, who knew that we both liked to play games, so she invited us over to play games together. And we ended up playing Dominion and Settlers of Catan, stuff like that, until we got to, well, where we are right now.

D: From my perspective, Allison was like, “Oh, I’ve got this friend, he makes board games, he’s super fun!” I then roped Quentin into a project after I learned that he builds robots and cool engineering stuff. After that, we started Elderwood.

Robots?! That’s amazing! Why are we wasting our time with D&D accessories when you could make us the Star Wars chess game with robots! They could fight to the death…

(Quentin didn’t seem on board with my idea, probably because he’d be doing all the work, but Dan was appropriately enthusiastic.)

D: One project led to another and then we just started goofing around with ideas; one of those ideas turned into Hex Chests. After it was put on Reddit we were like, “Alright, let’s do this. This looks fun!” And that was it. Right around the end of the Hex Chests Kickstarter, we decided we needed to commit to this thing. After a couple thousands of those chests, it wasn’t a goofy, “just for fun” project anymore. It was real.

And thus, Elderwood Academy was born. 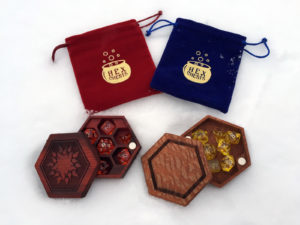 Q: A lot of the stuff we’ve built is all stuff that we enjoy playing with. Whenever we pitch ideas, the core thing is: is that something I want to have? Is that something I want to bring to my gaming table? Hex Chests was the initial project and then I pitched Dan the idea behind the Spell Book, a gaming box with bound leather; he loved it and we just started building them. We had a lot of fun with it.

And now you have the Scroll and Codex, which is currently doing really well on Kickstarter.

Q: With the Scroll and Codex project, it was partly made from things we had learned from Kickstarter in terms of building the actual Spell Books. We wanted something that felt more like a transformer, where you got to be building things. The idea of a portable, unrollable scroll was really cool and after we built one we were like, “Well, now we have to put it in something.” And then we had the codex which turned into a dice tower, which was fun and also transformable. I’m excited to make these for people because I think it’ll bring a nice amount of immersion to the gaming table.

WE PAUSE FOR A WORD FROM OUR JEN SPONSORS

At this point in the interview, they demoed the scroll and codex, which you can see more of in the Kickstarter video, but ladies and gents, this thing is legit. When the magnetic top

unsnaps, it makes this ridiculously satisfying popping sound. Everything about the Scroll and Codex looks like quality construction. Solid wood with a leather base for the scroll, and the codex has wood running the length of the product, wrapped in leather around the middle. According to Dan, it’s strong enough to withstand being tossed in a backpack, which is a huge perk for me since I have a habit of wrecking things in my bags. Dan also mentioned that others have put the Spell Book and Hex Chest through the gamut of tests, even sitting a 45lb weight on top of the Book to see if it would hold up. Spoiler alert: it did.

BACK TO YOUR REGULARLY SCHEDULED PROGRAMMING

Let’s take a break from all this building discussion and talk real nerdy. Do you have any good D&D stories?

D: In general, I love playing the lovable idiot. I find it really liberating to be as dumb as possible, so all my favorite moments in D&D are when my hero is completely clueless. One of my favorite moments was during a showdown with the “big bad.”We approached him and he was like, “I’m actually not that bad” and we were like, “Oh, okay. Let’s just leave him alone then.” AND THAT WAS THE END OF THE CAMPAIGN. 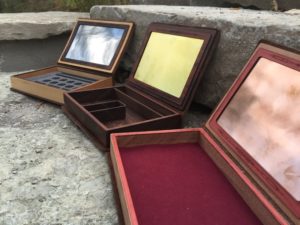 Q: So, uhm, I actually don’t play D&D; I haven’t played since middle school. But I do play a lot of Magic: The Gathering, so I’ve been kind of sore that all of our products continue to be D&D-related and not M:tG stuff. I tried so damn hard to get Spell Books to be M:tG deck cases, but by a HUGE majority, people bought them with the rolling tray option for D&D. Only a small amount of fans bought the M:tG deck option and I was like, “Darn it!”

So I know that you guys are just starting your Kickstarter campaign for Scroll and Codex, but what can you tease about the future?

D: So when we started, we only had like four ideas and we’ve made all those, so at this point, I think we’ll just close down shop.

Oh. Well, this is awkward.

D: I’m kidding, of course. People pitch us ideas all the time and at any given moment we’re probably pondering eleven different ideas between us. Once we narrow those down and we’re both excited to make something, that’s when we decide to move forward with it.

I mean, that’s fine but you could just do a Flash Sale and that’s it! Wash your hands of this hard labor nonsense.

D: Yea, we really wanted to start a heavy PR push right before closing down.

Q: That’ll get us a boost in those Kickstarter sales.

You mentioned before that the two of you bonded over Settlers of Catan, so with your woodworking skills would you ever consider making a custom Settlers board?

(They both laugh and at this point they pull out their sentimental “first project” which was a Settlers board prototype: two solid pieces of wood with hexagons carved out for the tiles and underneath are holes for all the game’s pieces.)

That…that is amazing. Can you make those? Can I buy that?

Q: We made this just before we started Hex Chests and once the Chests took off it kind of took a back seat to other projects. We’ve gotten a lot better with making things, at least, I think we have, so a Settlers board might actually be a more reasonable project for us now as opposed to say, two years ago. That’s an interesting question. We’ll have to revisit that idea. 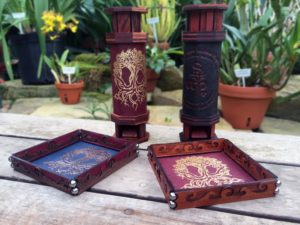 One more question so you guys can back to your busy day: what do you want us to know about Elderwood Academy and the things you make?

D: I think the takeaway is that Quentin and I really just want people to be happy. That’s our number one, two, and three bottom line. When we tried to put a mission statement together, that was about as far as we got: happy. All we’re doing is trying to make what we think are nice things. If people agree with us and think the things we make are nice, we want them to show up to the party and hang out with us. We think we make quality items and we guarantee everything we make, so we just want to make sure people are happy with what they’ve ordered.

Elderwood Academy has managed to take D&D accessories and turned them into stunning collectibles that is sure to make all of your gamer friends jealous. Check out Elderwood Academy’s website for more information on their products. Everything they make can be customized to your liking, from patterns to the type of wood, and so on. Also make sure you stop by their Scroll and Codex Kickstarter. And if you see them around on Twitter or anything, say hi, because they’re both really nice guys just making things they love.

@theworkprint
Follow
Previous article
‘How To Get Away With Murder’ Review: “We’re Good People Now”
Next article
‘Dancing With the Stars’ Review: A “Universal Dick” and a “Green Dude” Walk onto a Dance Floor …