Spoilers through Dark Matter 203: “I’ve seen the other side of you”.

If there’s one thing I love about Dark Matter it’s that it consistently creates conflict from within the characters themselves. Sure, the corporations are a looming threat, but for the most part, the struggle comes from putting together different characters from all walks of life and seeing how they react, which makes for great character development. And just as the crew of the Raza was starting to get comfortable and trusting with one another, finally feeling like they understood themselves, another wrench comes along and mucks the whole thing up.

“I’ve seen the other side of you” pits the old crew of the Raza against the new members of the Raza aaaaaaaaaaand all hell breaks loose because of it. After hearing about the death of One, Two takes some drastic measures and restricts the new members’ ability to move freely about the ship. Arax takes this affront to heart and rallies Nyx and Devon into thinking it’s an “us or them” situation. I can sympathize with how Two feels after the news of One’s death, how she feels they are partly to blame and they need to get revenge.  Yet, at the same time, it seemed like they swept One’s death under the rug with that conversation. If you aren’t paying close attention you could easily assume that she was only talking about missing him. When I asked if One was really dead, I thought there would be a bigger revelation. I’m partially glad there wasn’t a spectacle to it, but it still doesn’t seem final and after the preview for next week it doesn’t look like we’re getting answers anytime soon. 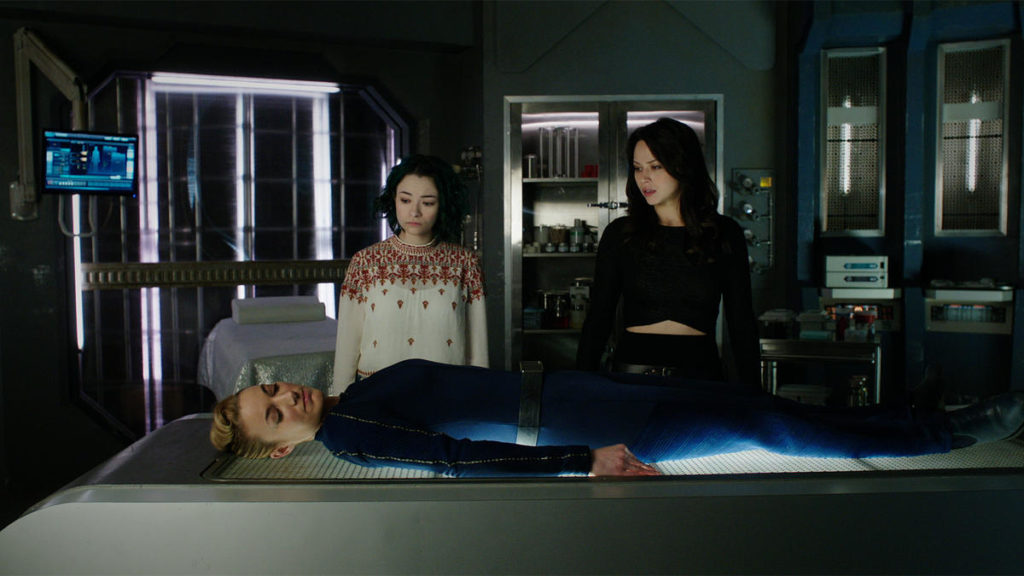 As the crew realized last episode, the Android can no longer establish a neural link with the ship, which causes her to shut down for 32 hours, giving her nanites time to heal the damage. In doing so, she inadvertently resets some the ship, including a backup of memories for Two, Three, and Four. The original original crew of the Raza reverts their memories back to 14 months before present day and it causes a wee bit of a snafu as they view Five as an intruder. (Nevermind Arax, Nyx, and Devon. They basically are intruders.)

Arax uses this conflict as an opportunity to send a message out to our suspicious friends who have an interest in Five. (Her… parents?) It seems he really can’t be trusted (shocker!), especially when he so badly wants the crew to visit his friend’s hollowed out moon full of “totally not a trap” supplies. I doubt he survives the next episode. (And that’s okay because Nyx, Two, and Five are about to become besties and I’m excited.)

It’s here that I have to commend Two, Three, and Four’s actors for how good they were this episode. The plot may have been a bit so-so but the acting was on point. I genuinely felt like Portia, Boone, and Ryo were three different characters aboard this ship. They were angrier, more callous, and Portia had this devious smile that, much like Five, frightened the hell out of me. Even Four played the gunman, which felt odd considering we’ve become so accustomed to him using his swords in close combat. Maybe the old Ryo only had the swords for sentiment’s sake. And it was heartbreaking watching Three be the first to come around to Five’s words, learning the truth about what happened to Sarah. 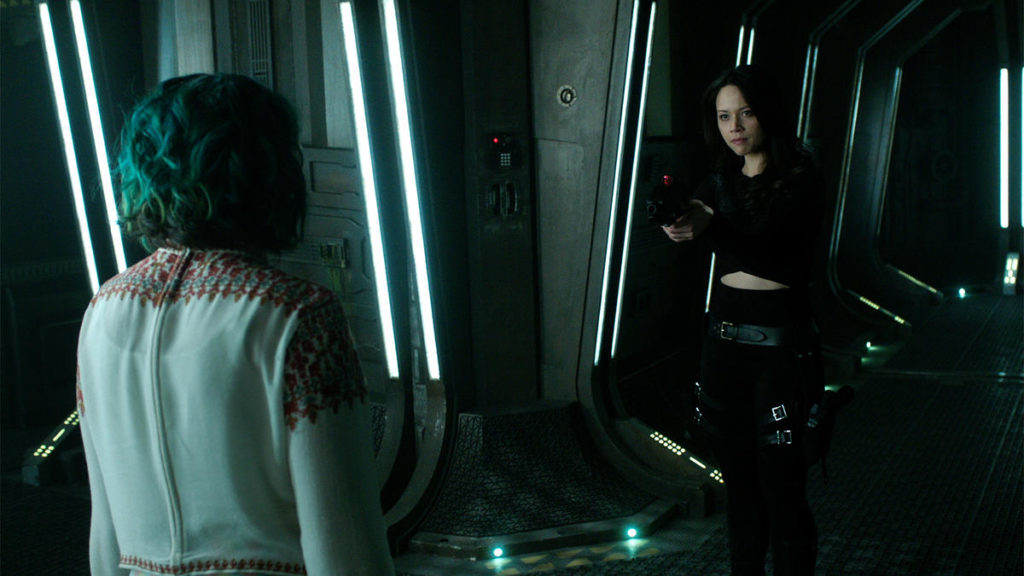 There was a gunfight between the old and new crew of the Raza but the real struggle was between Two and Five. Two is on a power trip now that she’s learned she can control the ship with her link and it spells disaster for everyone else on board. To save Two from herself, Five must attempt to do the same thing, risking her life to outrace Two’s control and coax her into being the woman she once was.

Five has always been the crew’s moral compass and with One (supposedly) gone forever, she doesn’t have backup to tell the others, “please don’t kill people!” It’s a tough position for Five to be in and she almost gives in to the violence until she sees Two as vulnerable as she has been and decides that kindness is the better way. Ultimately, Five’s goodness wins out and restores the crew back to their other memory-lossed state. (Is this confusing yet?) They have the option to regain their lost memories from the computer files, but at the risk of losing their current memories. Five pleads with them not to because they were awful people before she entered their lives, so they don’t.

Poor Five. Not only does she have to live with everyone else’s awful memories, but she constantly has to pull them back up out of the darkness to be the people she knows they can be. Goodness, that takes some strength.

Character-wise, “I’ve seen the other side of you” was a good episode. It showed us what the original crew of the Raza was like before the influence of Five, One, and even Six. They were cold, calculating, and willing to kill a young girl to protect themselves while earning a bit of money. But the newer crew is a bit softer, more willing to listen to reason, more willing to accept new members into the fold. It’s nice to see this dichotomy creep up but here’s hoping it’s not a regular occurrence.

Plot-wise, however, this episode might have been one of the weaker ones if only because it relied so heavily on assumptions. If you’re okay with letting sci-fi do its thing, then that’s cool but I found myself asking these questions throughout (lots of questions):

I may never know the answers to some of these questions, but hey, it’s fun to ask.