Dancing With the Stars Review: I Get My Kicks Above the Waistline, Sunshine

Something epic happened on this week’s episode of Dancing With the Stars. Something that will forever make me giggle, and make me see my host-crush Tom Bergeron in a whole new light. Cranky judge Len Goodman called Tom Bergeron “sunshine.” It was amazing. It was hilarious. It was the oddest thing ever.

Other than Bergeron’s new nickname, this show had other qualities of epic as well. It was Week 4, and it was one of the episodes everyone looks forward to, fans and crew and cast alike. Each star chooses “the most memorable year of their life”, chooses a song that represents it, and dances to it. Every year, this episode is filled with incredible moments of inspiration, emotional rawness, and endless sobbing. The show aired Monday night. I am writing this on Wednesday. I am still crying. Almost every single dance and STORY brought me to tears. Don’t worry . There is , as always, some moments of comedy too. Why wait any longer? Here we go, Sunshine…. 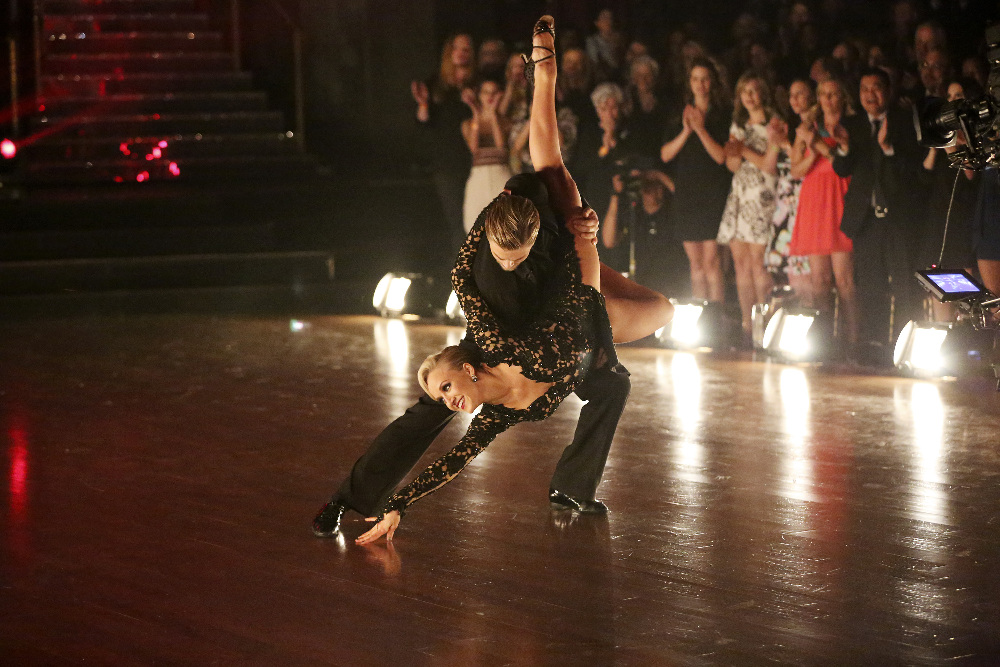 Nastia / Derek: The year was 2008, and Nastia represented the United States as a gymnast in the Beijing Olympics. She took home the Gold Medal. Their dance was the Argentine Tango to the song “Dark Eyes”, which was the same song she performed her routine to in Beijing. She dedicated the song to her parents, who helped and supported her dreams always, and who were in the audience watching, just to make damn sure that I was sobbing my face off by verse two of this song. What a gorgeous dance. WOW. Literally 20 seconds in, and I was a sobbing mess. Perfection. Beauty. Gorgeous lines and lifts. So, of course, grumpy Len found issue with it somehow, and didn’t see it as a true tango. Bergeron asked him: “So, there was something missing in that dance for you?” To which Len replied condescendingly: “Yes, there was, Sunshine.” “Okay then”, said Tom. The other judges loved it, calling it stunning and exhilarating. Scores were 9/8/9/10, and Len pooped his Depends. 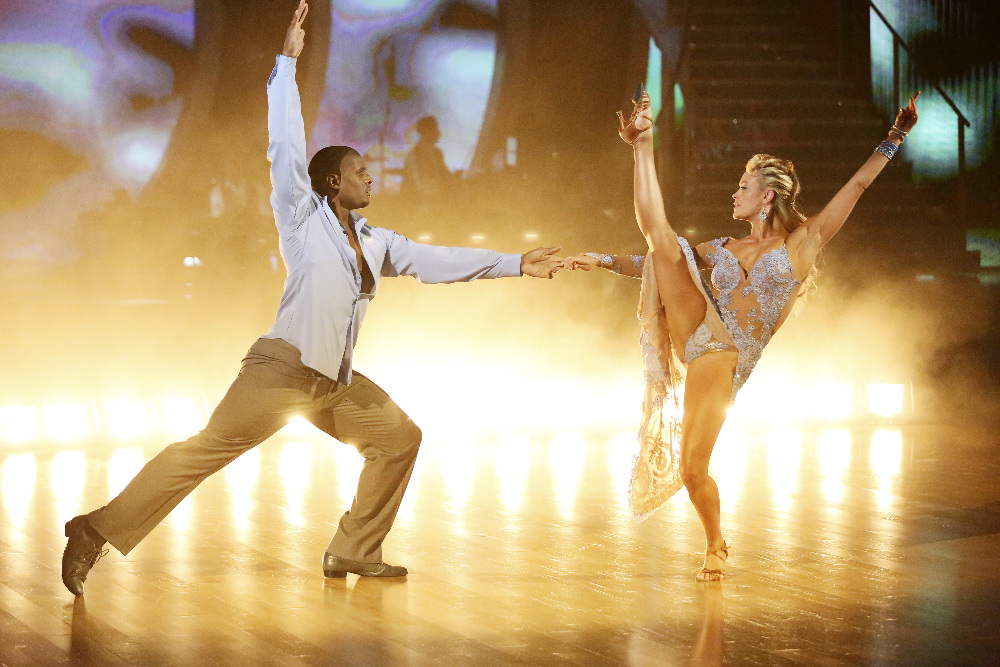 Michael / Peta:  His story is touching and moving and inspiring. When Michael was a child, he grew up in a bad environment, and his brother was killed by gunshots at a young age. Their dad left them and abandoned them soon after. When Micheal went to college, he made the decision to give his dad a second chance, and things were okay for a while between them. Then, in 2014, Michael came out as a gay man and the first openly gay player in the NFL. It cost him his relationship with his father, who told the NY Times that he was ashamed of his son and wanted nothing to do with him. They havent spoken since. His dance was to the song “I’m Not My Father’s Son”, and it was a gorgeous emotional Rumba. So beautifully done. After the dance, he cried onto Peta’s shoulders, and I cried into my popcorn bowl. Julianne called him “so trusting and vulnerable and beautiful.” Bruno said “it takes enormous guts to stand up for what you believe in, best dance you’ve done yet.” Carrie Ann said “you danced your soul for us.” Scores were 7/7/8/8, but they should have ALL been eights. 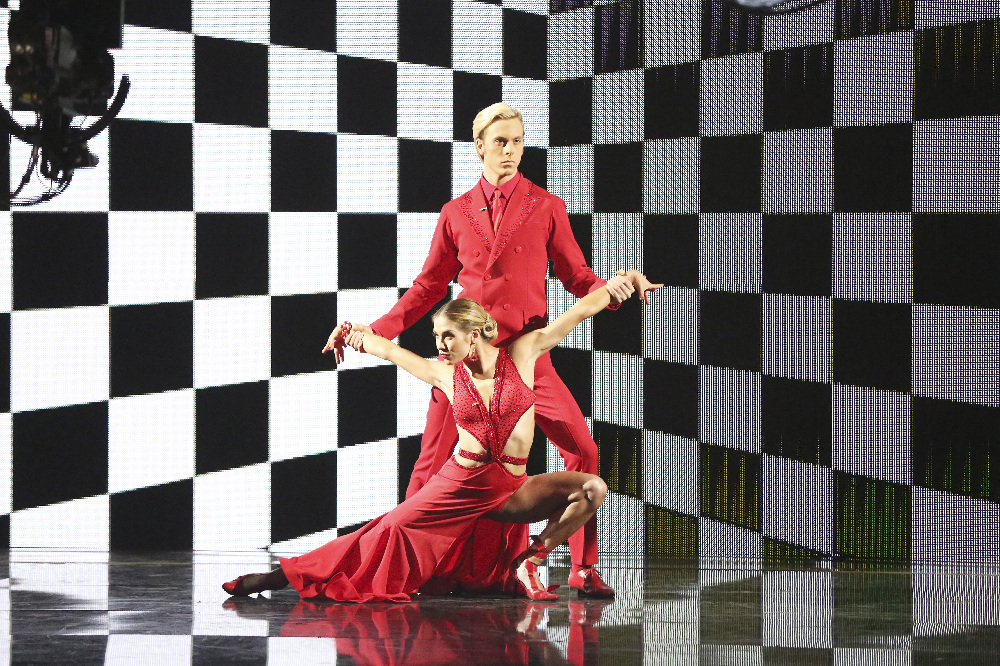 Riker / Allison:  Okay, this is where I  normally take my bathroom break, but since I have to write reviews, I sort of need to pay attention and watch everyone. This kid just bores me. Zzzzzzzz …. his story was kind of dull too, especially compared to all the hardships everyone else has through, the life-changing years and such. 2014 was the year he chose, because it was when his singing career really took off. Before that, he was “struggling” for SEVEN WHOLE YEARS!!!! OH THE TRAVESTY!!! That made me laugh. I’m 43 years old and have been “struggling” to make it somewhere in this business since I was 18 and moved to NYC to “be something!” Yeah. Seven years. You’re an infant. Take a number. They danced a Tango with a checkered backdrop that made me incredibly dizzy to look at. Len said it was “a tad on the hectic side, like my bladder.” Scores were 8/8/9/9, and I’ve still never heard one of this kid’s songs. 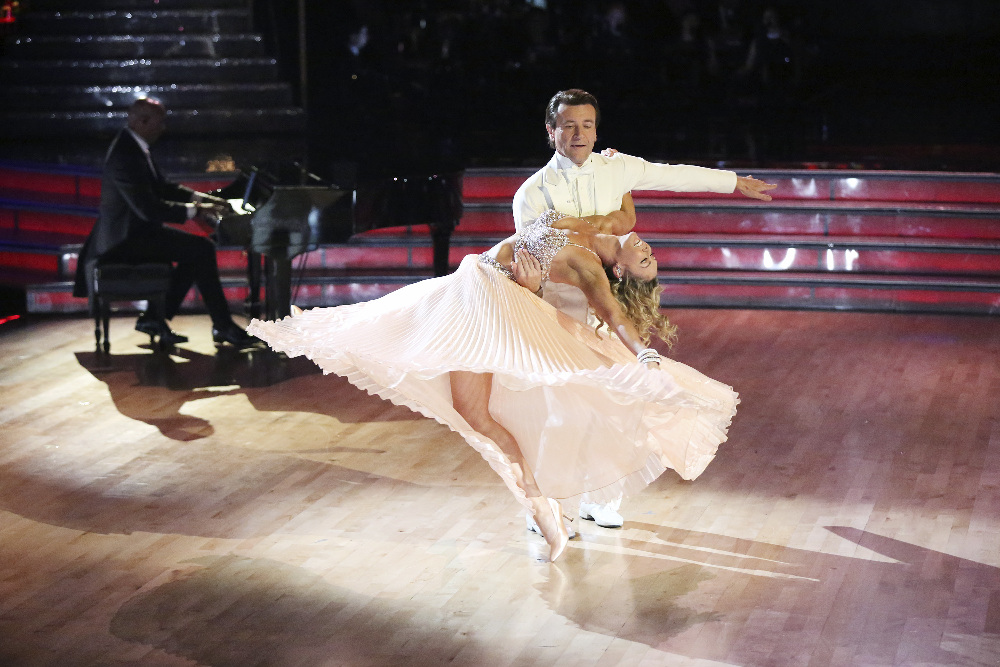 Robert / Kym:  The year was 2006, and Robert’s mom died from complications of ovarian cancer. It was found at stage 4, and at the time, Robert thought he could deal with the issue by throwing his money at it – getting her the best of every treatment out there. He soon learned that “cancer doesn’t care.” Robert cried as he told Kym how much his mother loved watching this show. He got emotional talking about how much he misses her, and dammit, this game-show-host looking cheesy dude made me cry!!! Beautiful dance. It felt like he was pulling his mom forward to him for one last Waltz. Scores were 8/9/8/9. 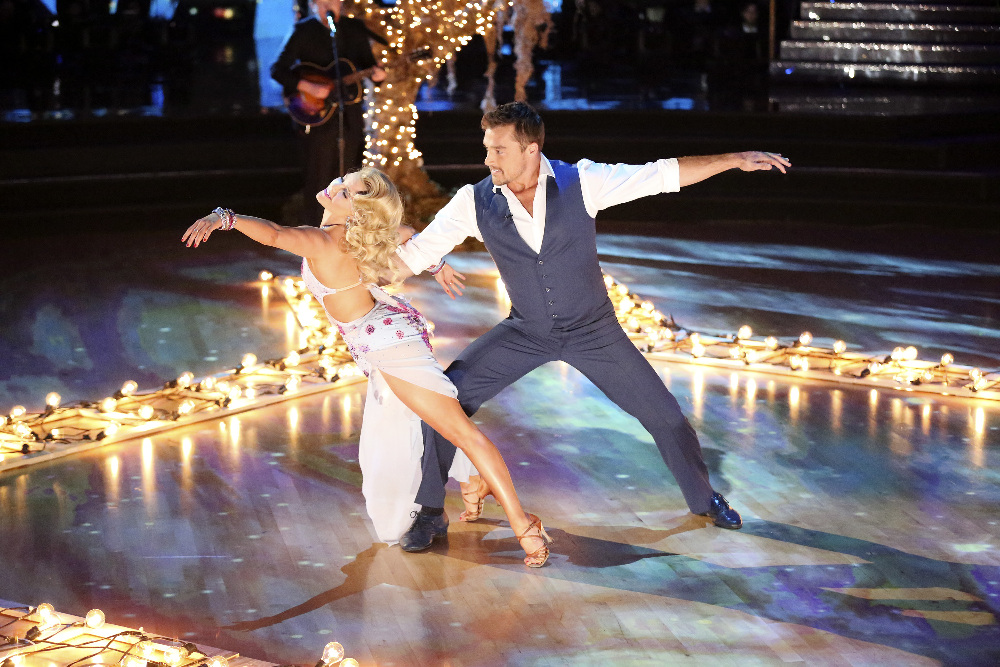 Farmer Dull / Witney:  In the year 2014, Chris was asked to be The Bachelor, and he met his now fiance, Whitney. (not to be confused with Witney) The Rumba dance was very pretty, but the expression on his face is always so BLAH. He has cardboard face. There is just nothing going on . Len said plainly: “That wasn’t that great.” Then he kicked a small child underneath the judges table. Scores were 7/6/7/7, and Len took 2 spoonfuls of his cranky-be-gone medicine. 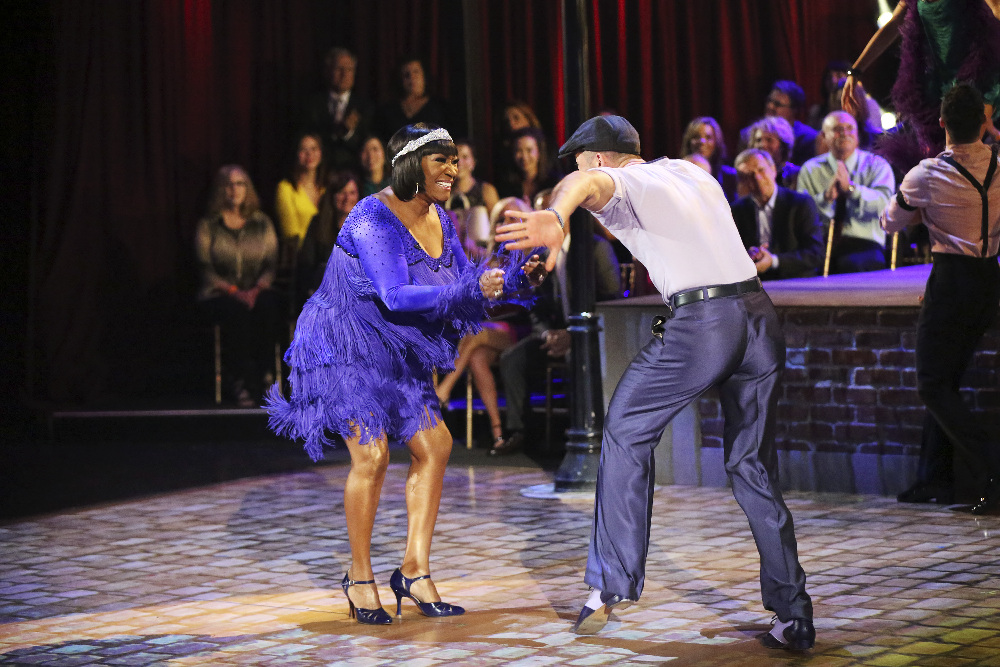 Patti / Artem:  She chose 1973, the year that her son was born, and changed her life forever. He was in the audience watching, of course, and she danced to “Dance With Me”, a song she herself recorded just months after her son’s birth. It was in the style of Jazz, and these two really jazzed it up bigtime. She had all kinds of great moves in this dance, and her legs were moving all about. The dance had a strong New Orleans feel, and was a total blast. Bruno stood up and screamed like a maniac “Go, girl!” and other words that nobody could make out as human. Horny Carrie Ann yelled desperately “Honey you HOT!!!!” Len said something about cappuccino and dancing, and … well …. it’s past your bedtime, Len. Get to bed. Scores were 8/7/7/8. 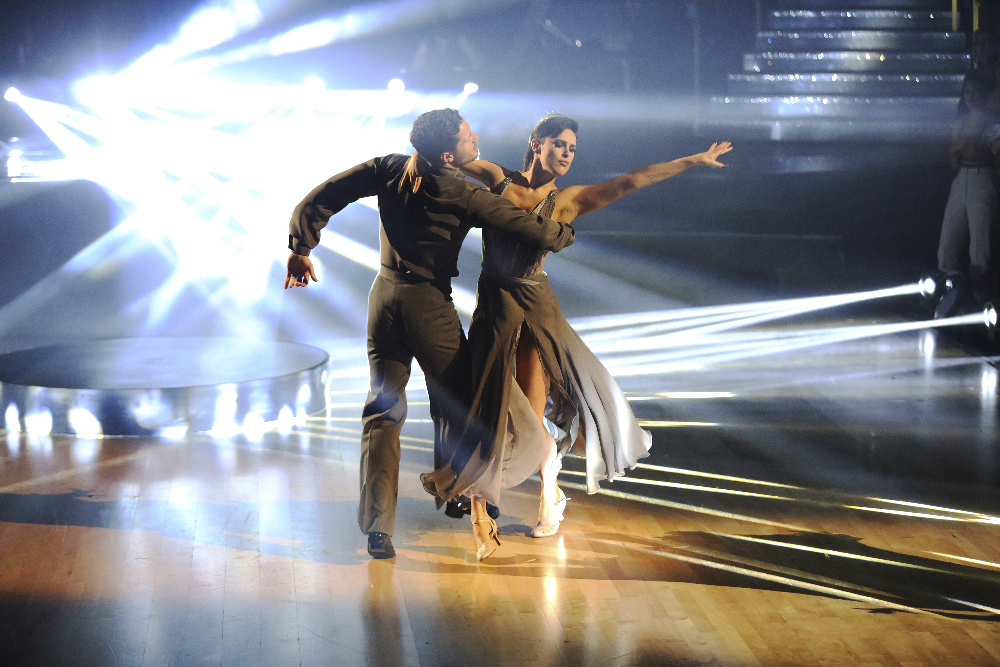 Rumer / Val:  The year she chose was 2014. What led up to it is a really beautiful story. Rumer talked about how it can be difficult growing up with such huge stars as parents, and how nasty some people were to her during her most awkward teen and young kid years, comparing her to her mom Demi Moore’s beauty and saying she looked so “manly” and looked more like her dad than her mom She was bullied online a lot, and never felt good about herself. In 2014, Rumer’s sister Talulah checked herself into rehab, and the way she just owned that and coped with it unapologetically, really inspired Rumer. Their Waltz was dedicated to her sister, and to anyone who never felt beautiful or was bullied. The second I heard that damn Adele song, I was a goner and the tears were coming. The dance was breathtaking. Horny Carrie Ann said something about how Rumer’s dancing affects HER body (gross). Len once again questioned whether or not it was actually a waltz or not. Hey there, Grumpypants, I don’t think you’re supposed to EAT the Ben-Gay. Chill out. When Len got booed, he yelled “Hey I have to be nasty. Nobody remembers me when I’m nice.” To which Bergeron brilliantly replied: “Yes, well, believe it or not Len, it’s not ALL about you!” Scores were 9/8/9/9. 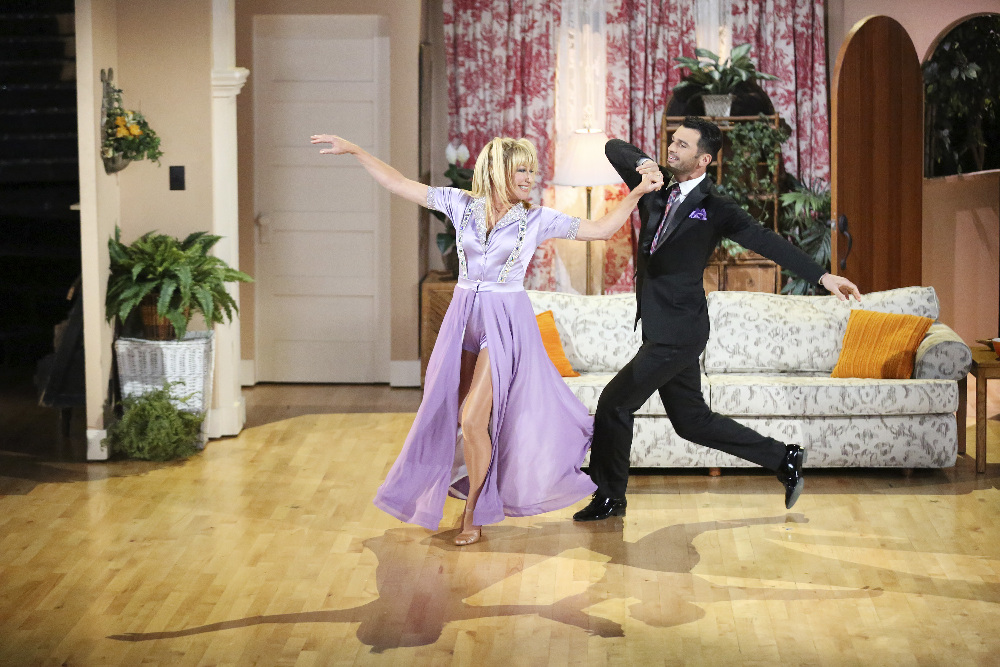 Suzanne / Tony: In 1977, Suzanne Somers had made the decision, after years of struggling, to quit acting. But her agent told her to just go on this one last audition. A few days later, she got the phone call saying that she landed the role of Chrissy Snow on what would become the number one sitcom on TV “Threes Company.” Her waltz was dedicated to the late John Ritter, who played Jack Tripper on the show, and they danced on a recreated version of the sitcom’s set – with Suzanne dressed in her finest Chrissy outfit and pigtails. Tony and Suzanne had a short dialogue exchange at the top of the dance that was pulled directly from the pilot episode . Suzanne called this dance “the dance Chrissy and Jack never got to dance, and the goodbye I never got to have with John.” This was so sweet, and she danced it with elegance and grace. Judges loved it and praised her, and then they all gave her 7’s. Tony thought that should have been a higher number, and I agree with him. 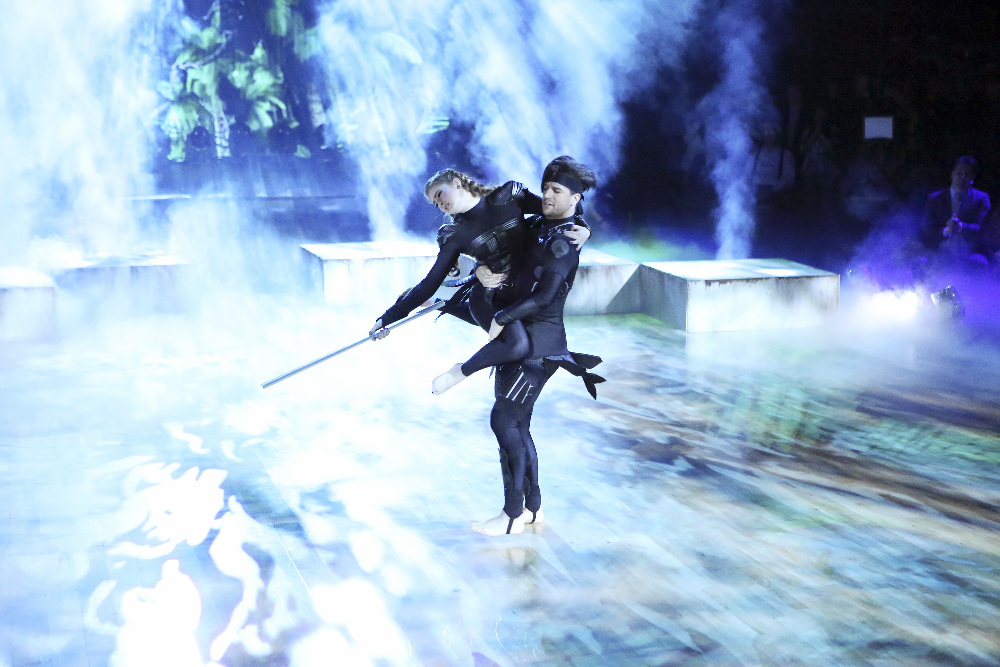 Willow / Mark:  The year was 2011, and her life changed forever. She got that phone call saying she just landed the role in “The Hunger Games” series. She was 10 years old. Her contemporary dance was an epic sword fight in the Hunger Games theme, and it was dedicated to her fans. Definitely the strongest dance of the night, with sharp and crisp moves. Bruno said it was a “triumph for my little warrior!” Yes, but enough about your penis, Bruno. Horny Carrie Ann chimed in that she is “blown away by you”. I’m sure she has been blowin’ something away! Their scores were highest of the night, and included that magic double-digit that makes people jump up and down. 10/9/10/10. When Erin Andrews announced that this couple was one of the ones “in jeopardy” of going home, Carrie Ann revealed her perfect 10 score by shouting “Jeopardy Shmeopardy!” As a reaction to the three 10’s, Willow screamed and was very excited. It was cool. 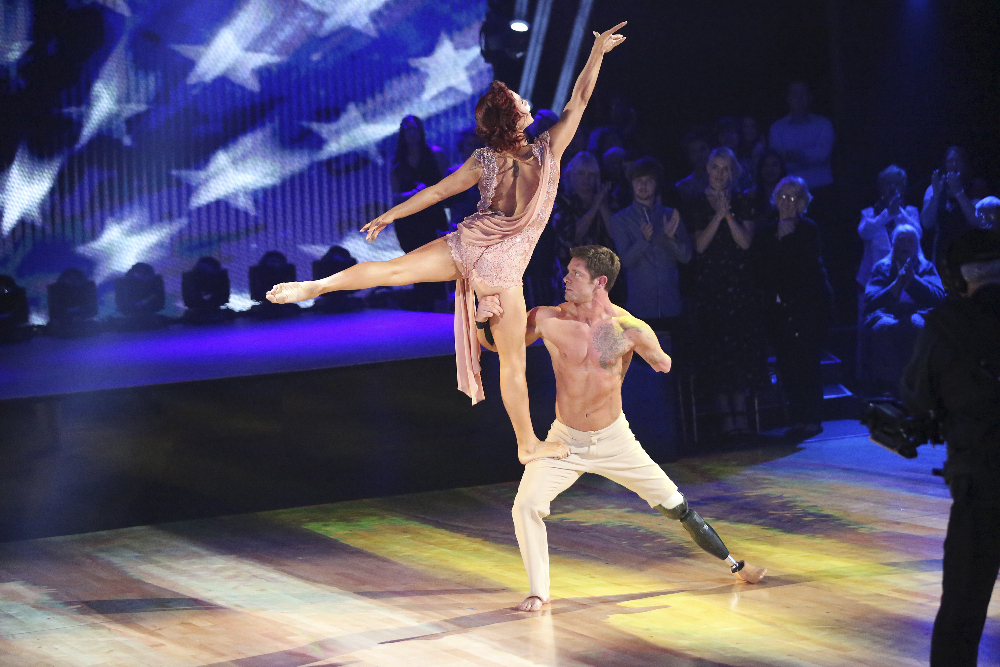 Noah / Sharna:  Oh, how I love this man. It was 2005, and he was on his second deployment in Iraq, when a roadside bomb hit his Humvee. A couple of days later, he woke up in the Vet hospital, with his left leg and left arm missing, on Christmas morning. “I buried all the pain at first”, he said. “I would sit alone and just drink. I tried to cope by myself , until one day I decided I HAD to make a change if I wanted any kind of life.” The song and dance was meant to show the journey from the man he was to the man he then became. It was a contemporary piece, and it was so brilliant. Every time he lifts her with one arm and she stays still and he holds her there, I am in awe. The strength. Bruno; “Your spirit soars unbroken. You want a superhero? There it is.”Len said no guts, no glory, then asked the audience to please stand up and applaud this man, who is a huge inspiration. Scores were 8/8/8/8, and I really thought he should have had nines.

GOING HOME:   Well, the bottom two were Riker / Allison and Michael / Peta. I really, really, really wanted Riker to go home with his dumb haircut and silly pop band that “struggled” for SEVEN WHOLE YEARS!!!! But that isn’t what happened. Nope. Michael , who did such a gorgeous dance and opened up his soul to us, got voted off instead. Heartbreaking. I really liked him.

Next Week:   Len Goodman and Tom Bergeron star in a new buddy-dance show called “Grumpy and Sunshine’, coming to a TV near you.