The Netflix fantasy series delivers on some questionable yet unconventional twists if you can bear with the struggle of getting there.

We breakdown the first three episodes of ‘Cursed’ on TheWorkprint podcast.

Based on the graphic novel by Frank Miller and Tom Wheeler, Cursed is a show with good intentions, beautiful scenery, surprising character twists, and plenty of strong female characters; unfortunately, it’s also, awful on almost every level of execution, often feeling painstakingly awkward and forced. Bogged down with an excess of meandering plotlines, Cursed loses its sight of what it’s trying to be both towards the back and front end of the series and ironically, hits its stride around episodes 5 and 6 with Merlin (Gustaf Skarsgaard) and Nimue (Katherine Langford), before fizzling in its conclusion. 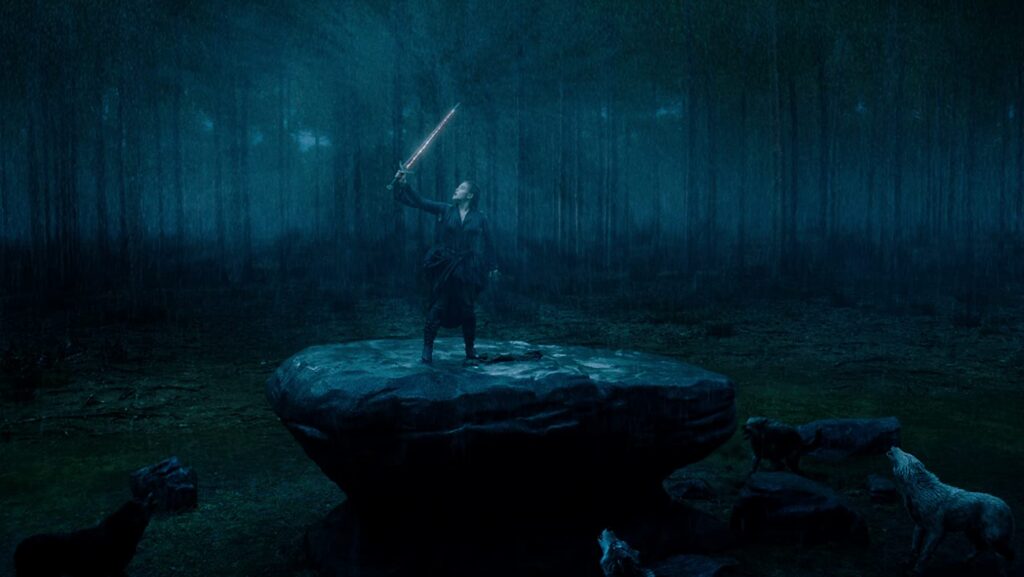 The best thing the show has going on for it is in its visual design and set pieces. As moments rich in color and costume feel vibrant and alive in its stunning recreation of medieval set pieces. Locations captured with stunning aerial shots of gorgeous castles, overgrown forests, and visual spectacles. Wonders which oddly contrast the graphic violence whenever it appears onscreen.

This show is not a gritty Game of Thrones but a beautiful and fanciful take on the Arthurian legend. It also never takes its edginess too far, teetering between young adult in its relational melodrama yet Game of Thrones in its risqué level of violence. Visually, the nudity is minimal, but the blood spatters are gory. There is also animation for transitions between scenes that feels beautiful but often jarring. Like something confused in tone as to what type of audience it’s trying to attract: adults or teens?

Much like its main character Nimue, the show is confused as to what it’s trying to be. It’s early episodes are focused on character introductions and a quest to return the sword to Merlin, which is then thrown out for exposition and flashbacks (arguably the best in the series is Merlin’s story) along with the introduction of the green knight and the Fae, which is then, sidetracked by both random new motivations, new factions, and oddly enough, political intrigue. The show changes intentions as often as new plot points are introduced (which I’ll delve into later). It’s incredibly sloppy writing focused on a character who consistently seems to throw her narrative away choosing not to be a heroine again-and-again until it’s forced upon her… where she then throws it away again.

To summarize quickly, Nimue is cursed with magic abilities. Inherits a cursed blade with phenomenal magic abilities. Becomes summoner. Then embraces being queen of the magical Fae. She often fails at her heroism, and is oddly, a really bad swordfighter though a gifted spellcaster. The latter which she refuses to use out of fear of her curse. When Nimue is not flirting with Arthur, she is being saved by him despite being infinitely more powerful.

She also complains about these things while the entire time failing upwards, making her, simply put: The Queen of the Karens. Most infuriatingly, Nimue is talented and beautiful but her traits are squandered as the writing in the show is so unbelievably stupid. Worst of all: misleading. By season’s end, this show has nothing to do with Nimue’s destiny as the Lady in The Lake, in fact, I don’t even understand the point of her journey, as it just sort of ends? Leaving me confused. Making me feel like I’d wasted my time.

Nimue aside, I’ll say that the show’s biggest payoff is its reveal about whom-is-whom in the Arthurian legend, as a lot of the people met along the journey are actually other people we know of form the old tales. It is a decent twist but not one that should carry an entire series. 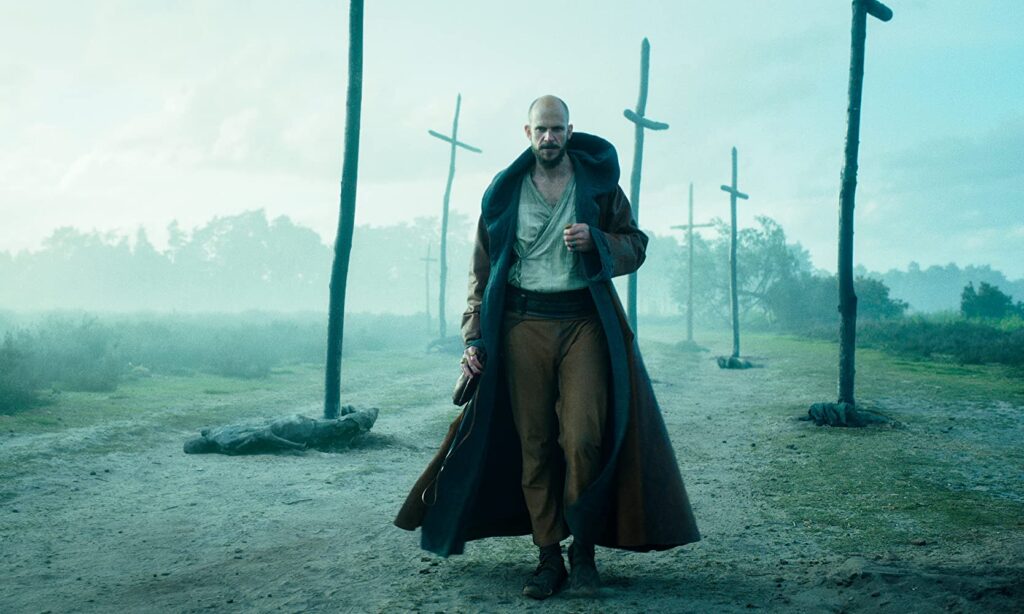 It’s Got Too Many Subplots

Far too many. I’m just going to list some and leave it at that…

This is just me listing a few. There’s actually a lot more, I honestly just stopped caring at a certain point. I think time gaps would’ve helped show tremendously. I also think most of these plots are unnecessary, as the gist of the series really happens in 4-5 episodes. The rest is just added conflicts to layer the characters which, to be honest, don’t really matter as all these random additions detract from the point of the series. 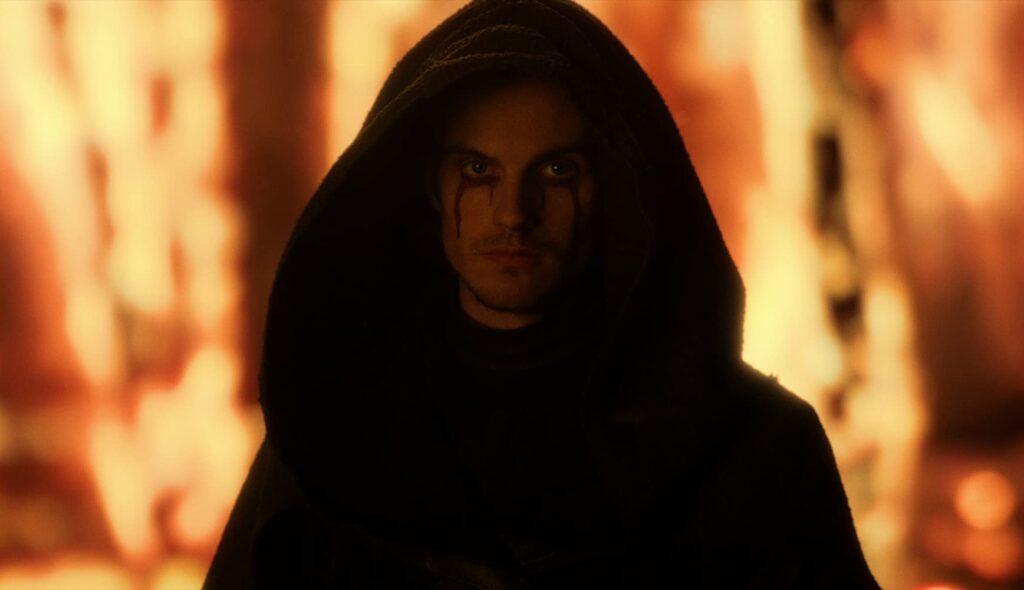 Look, there’s a lot of plot holes and moments of stupidity in this series.  Moments of slow and completely avoidable deaths in awkward stretched out melodrama meant to evoke tension but often, feels like unintentional slapstick comedy. There are cliche writing and dialogue. Stereotypical genocidal bad guys.  And then, there’s more than a handful of moments the bad guys let people go for… no reason really. Scenes where a person should logically kill another person but don’t for dramatic purposes, and then oddly enough do, for… random purposes? For specific moments, check Iris and Uther’s story arcs for specific gratuitous examples.

To put it simply and save you time: Cursed is Game of Thrones, The Bad Seasons. Nimue is Daenerys, Arthur is John Snow, Merlin is Tyrion with a hint of Drogon, and The White Walkers are the many overwhelming subplots. And not only does everyone surprisingly survive, but they also get brand new character titles which we know leads to more adventures in the future.

I honestly had to re-watch the pilot because not only was I not able to follow, but more than anything else, I didn’t really care. The show has too many meandering plotlines and a curse, whose malice is confusingly overshadowed by a second, coincidental second curse. I don’t really see a goal in mind, nor is Nimue’s struggle selling it well at all which is why fan reactions have soured to the series. With critic reviews, in my opinion, being decent at best.

Still, the Merlin episodes in the middle made me motivated to finish the series. But I was left greatly disappointed. On the positives: you’ll have fun seeing which characters are which from the Arthurian legend.