We all know that the bane of modern conveniences is internet connectivity. Data plans are expensive, so free wifi is arguably the best amenity one can get on a somewhat regular basis. You can imagine the very real consternation when the wifi is down on the Greendale campus. When the study group complains to the Dean, he of course turns it immediately around and assigns the problem to the committee, which of course means that the group has to take care of it themselves, with Elroy as the new IT lady (the old IT lady was of course Paget Brewster in another role, who is now Frankie Dart).

As one storyline is set up, we move onto the next, where the school board frat brothers show up to ask the Dean to become part of the board. The catch is, he has to come out as openly gay to make the board seem accepting and tolerant, which is really the board trying to appease the public after another snafu. I would really like to know if Colorado has a board for community colleges, and if so, I’d like the minutes to their meetings. Either way, this leaves the pansexual enigma that is Dean Craig Pelton in limbo, to come out of the closet and get appointed due to his sexuality, or keep silent and stay just a dean.

As the new IT lady, Elroy appoints Abed as his assistant and seek to track down the source of the wifi problem. They end up finding the cause of the outage, which happens to be a bird’s nest full of baby birds. Abed’s mother issues pop up immediately as he firmly takes a stand, pleading against Elroy’s removal of the nest. Elroy then goes on a “baby bird murder monologue” citing evolution, humanity’s place in the preservation or destruction of the Earth, and how none of it can be done without wifi. Eventually, because Elroy isn’t a demon, he sides with Abed and decides to stall until the mama bird can get the birds to literally fly the coop, which means the wifi stays down a bit longer.

Let’s take a quick second to talk about the wildcard that is Ben Chang. He started off as a Spanish teacher, then became a student, then dictator, then a scheming amnesiac named Kevin, and finally, for now, just a regular student. At this point, there’s nothing that Community could do with Chang that would be completely out of the realm of possibility. So of course, the writers have Chang auditioning for the stage production of “The Karate Kid”. Jason Mantzoukas guest stars as the crazed director who is putting the movie on stage. I personally love Jason Mantzoukas on screen. He plays pretty much the same character across every show, but the manic intensity and crazed logic behind his motivations are hilarious. Of course, this fits in perfectly in Community, where he decides to blindly cast Annie as Daniel-san (the role that Chang was going for) and picks Chang to play Mr. Miyagi. Chang, disappointed that he’s typecast as the Asian, jealously looks at Annie for being picked out of the blue for the role he was auditioning for. 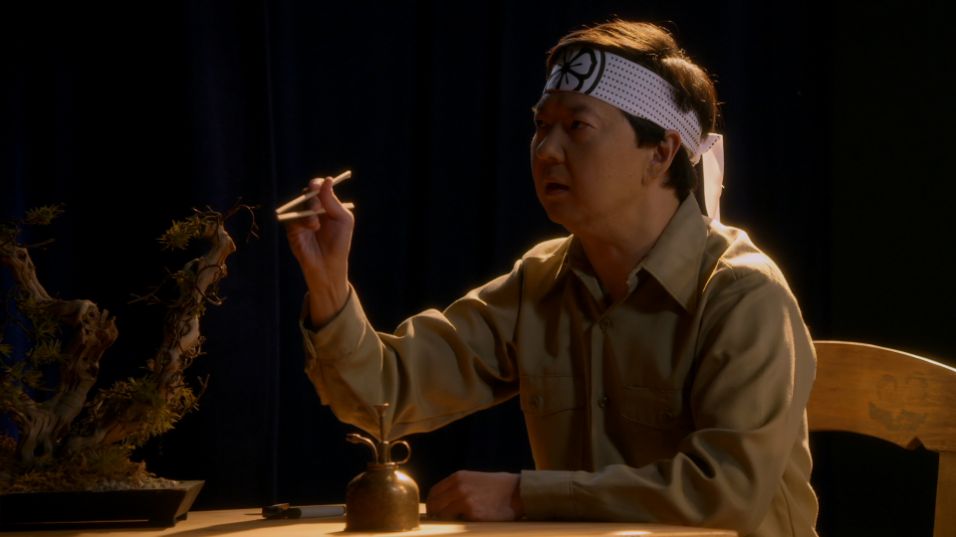 Meanwhile, Frankie, Jeff, and the Dean are in his office discussing the merits of him taking a position on the merit of sexuality. Being new at this, Frankie actually tries to make a serious discussion on the topic while the Dean and Jeff hold a silent sidebar conversation of glances wondering about Frankie’s sexual orientation. Of course, Jeff does the Jeff thing and convinces the Dean to take the position for advantage and place one of Greendale’s own on the school board, leading to a press conference where the Dean is placed front and center of the school board’s attempt to rehabilitate his image. The Dean and his faux partner Domingo are then sent into a full montage of fame set to ‘Jolene’, except replaced with ‘Gay Dean’, apparently only expressing about 2/7 of his sexuality.

Rehearsals have now started and while Annie is hamming it up on stage, Chang is being berated and verbally abused by the director. Annie obviously feels for Chang, but her ego at being cast keeps her from fully committing to helping Chang out. Annie’s belief in her own superiority is all for naught as she finally stands up for Chang, only to realize that she isn’t the focus of the play at all, but just a side character picked so they could save on the budget. The director’s focus on Chang is because he has the sadness and depth to play Mr. Miyagi (who upon thinking about it, is an incredibly tragic character in the film). What ends up happening, is Chang absolutely nailing the part of Miyagi on stage. I was genuinely amazed at how Ken Jeong has grown as an actor, and no lie, I wouldn’t mind seeing this play put with him in it. You can also watch Annie squirm as Annie Kim takes over her role and realizing that the play, even without her, is fantastic. So much of Annie is wound up in her believing that she’s special, and above others. It’s been a while since she’s been set back in her place, and this is a great subtle way to do it, as an audience reaction.

Finally, things come to a head while the school board realizes that while having a gay dean helps, it doesn’t substitute for competence. It ends up with Abed taping a confrontation between an unarmed black man, and an unarmed openly gay dean. Community’s own version of an unstoppable force and an immovable object. Heartbreakingly, it leads to two baby birds dying, but the restoration of the wifi. The Dean goes through an existential crisis because of this, and in doing so, comes out to the public, as a politician. In the end, the study group goes out to let the last surviving bird free, to scare it off wearing cat masks, but also flapping finger wings symbolically. The baby bird at last flies off, life-affirmingly, only to land and probably nest inside a transformer.

This is the Community that I’ve been waiting for in season six. Three separate storylines, but each able to hold water. When Community is at its strongest, each of the A, B, and C storylines are strong, but most importantly, each character has their own time to breath and come into their own. This episode delivers that in spades.

Oh, and Britta gets little to no screen time. Coincidence? I think not.