“RICO” opens with a flashback of Bob Odenkirk, his “Slippin’ Jimmy” days in the rearview mirror, as he pushes a mail-cart down the halls of HHM. His route ends in a back room where Kim opens an envelope containing his Bar results for him. Learning of his acceptance, they embrace in a full on kiss and we see another layer to their nebulous half-formed relationship that continues in the show’s present day. Meanwhile, Charlie is still the juggernaut lawyer that sprung Jimmy from jail. Upon finding out that his brother became a lawyer, Charlie is flabbergasted. Not proud nor happy, merely confused that this event could happen and that it is in fact genuine. His esquire status is real and though his circuitous route lacks glamour, it more than makes up for it with hustle. Despite this stunning achievement, when Jimmy asks his brother (a name partner of the firm) for a job, Charlie deflects an outright rejection by citing his need to check with the other partners.

This answer comes sooner than a piece of congratulatory cake. Hamlin gives us the answer, well not so much us, as just Jimmy. Sadly we’re on the outside, forced to watch Hamlin talk down to Jimmy dutifully perched on a stool in a Dwight Shrute short-sleeved button-up. Our only audio is the droll monotony of the copy machine. The audio resumes when Howard opens the door, calling back “let’s reassess in six months.” And we know enough.

Back in the present, Jimmy is pushing forward with his Elder Law practice. In true, anti-Saul fashion, Jimmy forgoes his meager fee till his client receives her allowance the following month. He’s about to press on until he doubles back, the term “allowance” ringing in his ears. There he learns about the assisted living facilities shakedown style billing practices. When he returns to the establishment, he is forcibly removed, causing him to draft a “legal document” on a scrawl of TP to cease the back office’s document shredding. Again h’s physically escorted out, the consummate little man with unconventional means trying to fight the establishment. Despite this setback, Jimmy doesn’t give up. Jimmy never gives up! Look at how he became a lawyer: University of American Samoa, distance learning on nights and weekends, and three bar attempts. With his options limited, he does the antithesis of what an “ambulance chaser” would do. Ruining his Matlock attire, he dumpster dives for the shredded documents. And labors to piece the evidence back together.

Elsewhere, Mike reconnects with his daughter-in-law. She’s looking for someone to babysit and Mike jumps at the chance to be in his granddaughter’s life. When she comes back from her shift they begin to talk about her growing debt and need for more money. This leads Mike back to the vet who stitched up his gunshot wound looking for work more lucrative than his current toll job. 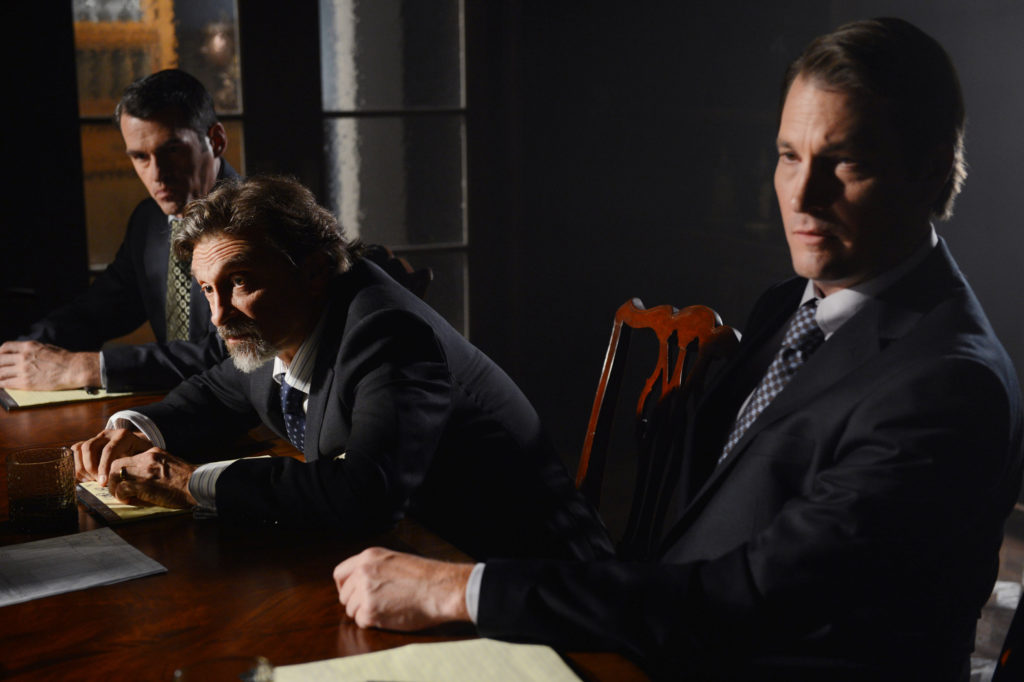 For better or worse (it remains to be seen) Chuck offers to help Jimmy get this case off the ground. Jimmy, just wanting Chuck to be proud of him, accepts, and in a bit of teamwork, the two are able to piece together the documents and find “the smoking gun”. It’s here that we see where Chuck supersedes Jimmy’s hard work. He effortlessly rattles off the necessary case files they’ll need relegating Jimmy to note taking. The lawyers to Sandpiper shows up and Chuck tightens up, rattled at outsiders coming into his electronics free zone. The opposing lawyers propose a settlement, and while Jimmy doesn’t agree with their figure, Chuck brazenly gives them a counter offer significantly higher than their previously estimated figure.

The episode ends with Chuck so busy and in the zone with the case that he forgets his malady and ventures outside to get some files in Jimmy’s car. It’s only once Jimmy alerts him of his current location that we’re left wondering how he’s going to react.

With every new episode of Better Call Saul, I find myself asking, “where will it all go wrong?” We know what James McGill becomes, but we don’t know how. In “RICO” we see Jimmy and Mike going down two very different paths that we know will cross again. Jimmy, during his foray into elder law, stumbles across a scam that is ripping off his clients. Mike, true his character all along, needs to provide for his granddaughter and goes about it in a questionable manner. Moments of light and dark; like a pointillist painting.  The series is speckled with good and bad choices, so that when you take a step back the answer to this “how” shows itself in stark clarity.

The what ifs abound, but Gilligan’s shows are all about consequences. The consequences of dumb moments of happenstance that make up these characters lives. We know there isn’t a happy ending, we’ve been paying attention.This fact makes the eighth episode of “RICO” all the more heart-wrenching. The ability for Jimmy to help his clients, establish himself as a legitimate lawyer, work with his brother, and better himself financially all seem within reach; like a mirage.