There I was, pressed against the wall, only peeking out long enough to count the guards. Two. Only two guards standing between me and my goal. Crouching alongside a car conveniently abandoned between me and the enemies allowed me to creep in range. One thrown bullet casing was all it took to pique the curiosity of one of the guards.  While he wandered off, questioning whether or not the sky was falling, my night stick became acquainted with the back of his partners head. One.

By the time the goon turned around and spotted me it was too late. I whipped out my secret weapon. The embodiment of truth, justice, and righteousness — my badge! Frozen in awe, I ordered him on the ground and although I had cuffed around 200 of his friends in the last ten minutes, I still had at least one pair left for him.

You’d be forgiven if you assumed that was a scene out of one of the Splinter Cell or a Metal Gear Solid game, but nope, this was my experience playing Battlefield: Hardline. You step into the shoes of Nick Mendoza, a cop on Miami’s Vice unit fighting to put a stop to the city’s cocaine drug war. The campaign is broken down by episodes, complete with “previously on” and “next time on” cheesy intros and outros. And when I say cheesy, I mean full on “liquid gold Velveeta” cheese. It bounces from the drug war to dirty cops before turning into a revenge plot. More often than not, Hardline feels like a parody or low budget version of shows like CSI and Law and Order.

While the story may be ridiculous and forgettable, the gameplay in Hardline’s single player campaign is actually quite interesting. The developers over at Visceral Games decided to forgo the linear first person shooter formula of Battlefield campaigns past and instead allow the player to have choice in how they approach a given situation.

As described in my opening, you could play through the majority of the campaign using stealth and nonlethal tactics. With the level design featuring wide open maps with various pathways, you’re rewarded for planning out a game plan and executing it with precision. Approaching three or fewer enemies undetected allows you to “freeze” them by flashing your badge, at which point you can cuff them one by one with your endless supply of handcuffs. Seriously, Nick’s pants must have been imbued with an Undetectable Extension Charm (insert genital joke here). 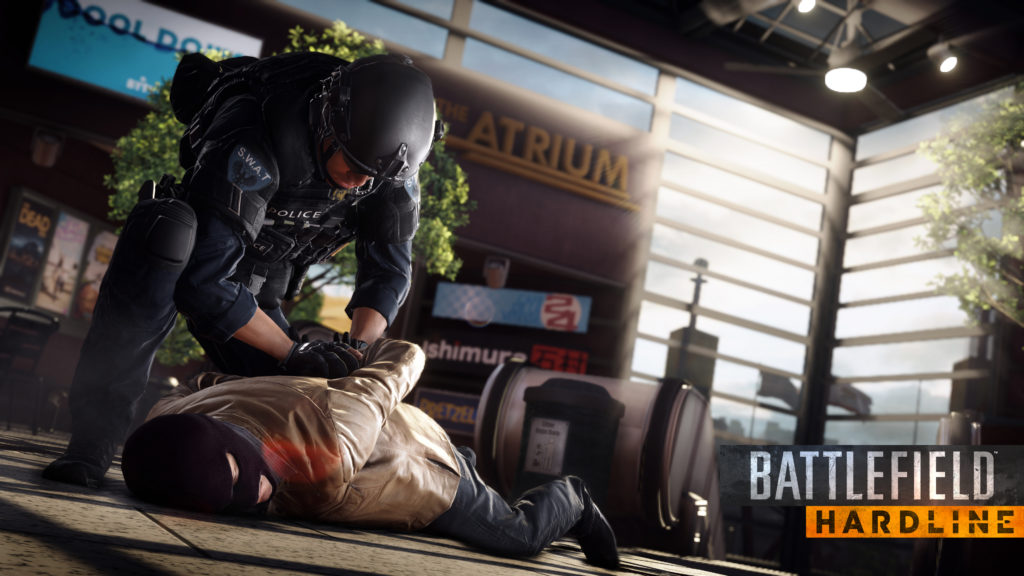 While tackling each situation silently gains you more “expert points” to unlock new weapons and gadgets, you can still run and gun through every level if your heart so desires. The controls handle like your typical first person shooter and the environmental destruction that has become the calling card of the Battlefield franchise is still present in Hardline, so you won’t be in unfamiliar territory. In fact, I found myself using a mix of both stealth and guns blazing in my playthrough, which allowed me to channel my inner John McClane and still max out my expert level. I applaud Visceral for giving me this option and hope to see other developers adopt this.

While I enjoyed Hardline’s single player efforts, the star of the Battlefield franchise has always been multiplayer. I am here to report that Battlefield: Hardline multiplayer plays like… well like Battlefield. The focus is on large, open maps, with high player counts and vehicles everywhere. Hardline adds some new wrinkles to the formula by including a cops vs criminals motif.

In Heist mode, playing on the side of the Criminals finds you and your teammates attempting to rob a vault and transport a duffel bag full of money to an extraction point with limited respawns. Unlike the Criminals, Cops have unlimited respawns which helps balance the fact that extracting the bags results in an instant win for the Criminals. Hotwire mode is similar to traditional Conquest, except instead of holding down stationary points, you capture and drive vehicles at high speeds to gain points. Blood Money is capture the flag, if the flag was a stack of cash. The common theme being that these are all modes that experienced Battlefield players have played before, just with some added pizzazz.

This  brings me to Hardline’s biggest problem; it just feels too much like Battlefield 4. Take a look at any internet thread about Hardline’s multiplayer and you’ll find a number of concerned citizens (*read Trolls) stating how it’s just an overpriced mod. While I think the single player is fresh, if you are still playing Battlefield 4’s multiplayer and enjoying it, I’m not sure the “new”  modes here are different enough to justify buying a brand new game.

From a technical standpoint Hardline ran smooth (at least on the Xbox One). Even with the large player counts, I never experienced frame rate drops or lag. In what can only be described as some sort of miracle, Hardline’s severs have held up fine since launch and I’ve had no issues finding matches. While the game ran fine, somehow the graphics fare worse this year, with environments and textures appearing flat and dull on most maps. The audio is top notch as always but fails to make up for the muddied visuals.

Battlefield Hardline is an over the top, cheesy cop movie with interesting gameplay mechanics bundled with a familiar multiplayer experience.  It reminds me deciding to buy the “s” variations of  the iPhone. If you’ve never owned an iPhone, or it has been some time since your last one, then the “s” is great and fresh. If you currently have last year’s model you’re probably better off just waiting for the next one. Either way you’re getting a solid, if not revolutionary, product and that is Battlefield Hardline in a nutshell.

Reviewed on the Xbox One