‘Short Circuit Party’ begins the morning after prank day and the seniors of PHHS are stuck cleaning the mess that their bubbletastic fun wreaked on the school. Sadie looks at her fellow students scrubbing the walls and announces “Stop being overachievers. We’re responsible for a little foam, not 800 years of institutionalized filth.” This may be in my top 5 favorite Sadie lines ever.

Tamara tries to get Sadie involved in the cleanup, but I mean come on. Sadie doing custodial work? Never gonna happen. Jenna tries to lighten the mood in the hallway by starting a little a water fight with the disgusting mop water. But, like most things Jenna does, this ends up a disaster. She throws the water directly onto the school’s electrical system, causing a school wide blackout.

This gets Jenna sent directly to Val’s office. Val is pissed, how dare Jenna knock out the electricity in her place of work/home. Jenna tries to give Val a reality check, basically saying, “You are not Caleb Rivers, you cannot live in the vents of the school” but then Val’s boyfriend Biggie comes barging in begging Val to come back home. Jenna finally flees Val’s office and to find T:

Jenna wanders into the school courtyard, to discover free ice cream. When Jenna killed all electricity in the school, all the freezers stopped working as well, which means…. eat all the ice cream before it melts!! Life doesn’t get better than that does it? No amount of ice cream can cheer up Matty though, who is still reeling over the fact that his best friend slept with his girlfriend. Meanwhile, Jake seems to have become a local hero among the bros of PHHS for banging McKibbins girl.

Val comes outside with her megaphone to address the student body and blame Jenna Hamilton for all repercussions of frying the schools fuse, which now includes school being cancelled for the rest of the day. This announcement prompts all 50 extras in the background to pump their fists and start chanting “Jenna.” Jenna is now the school’s new hero. 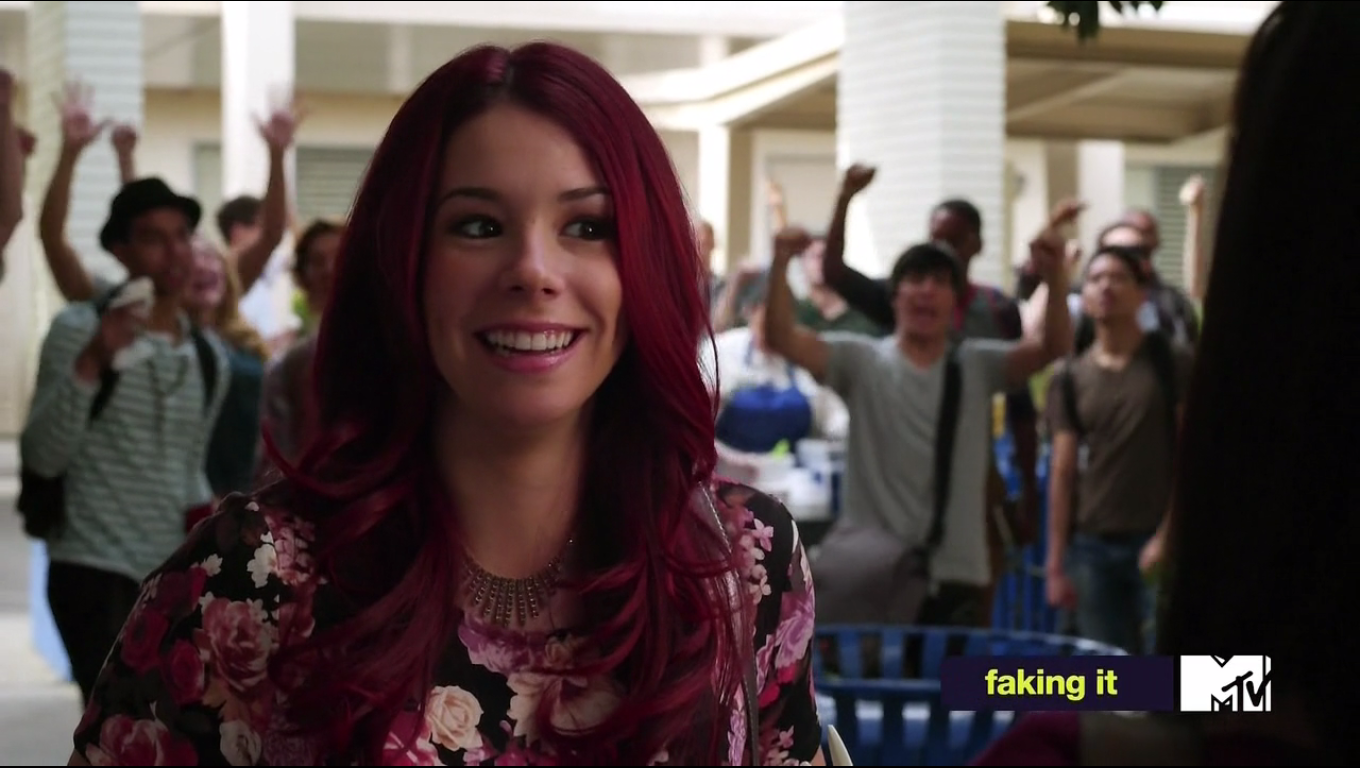 T decides to capitalize on this fervor and use it to climb the high school social ladder. Jenna looks around, a little freaked out at first, and then shrugs her shoulders and decides to go with the flow and accept her new label of popular. Jenna screams out “That’s right. Blackout party at the beach bitches” and she volunteers to bring the booze.

Of course this lead to the saga of J and T’s alcohol procurement adventure. First stop on this journey, The Hamilton liquor cabinet which contains a buttload of booze (the definition of a buttload can be found here). When they get home, they find that a certain crazy guidance counselor beat them to the liquor cabinet and is currently dabbling in the art of mixology/getting wasted. 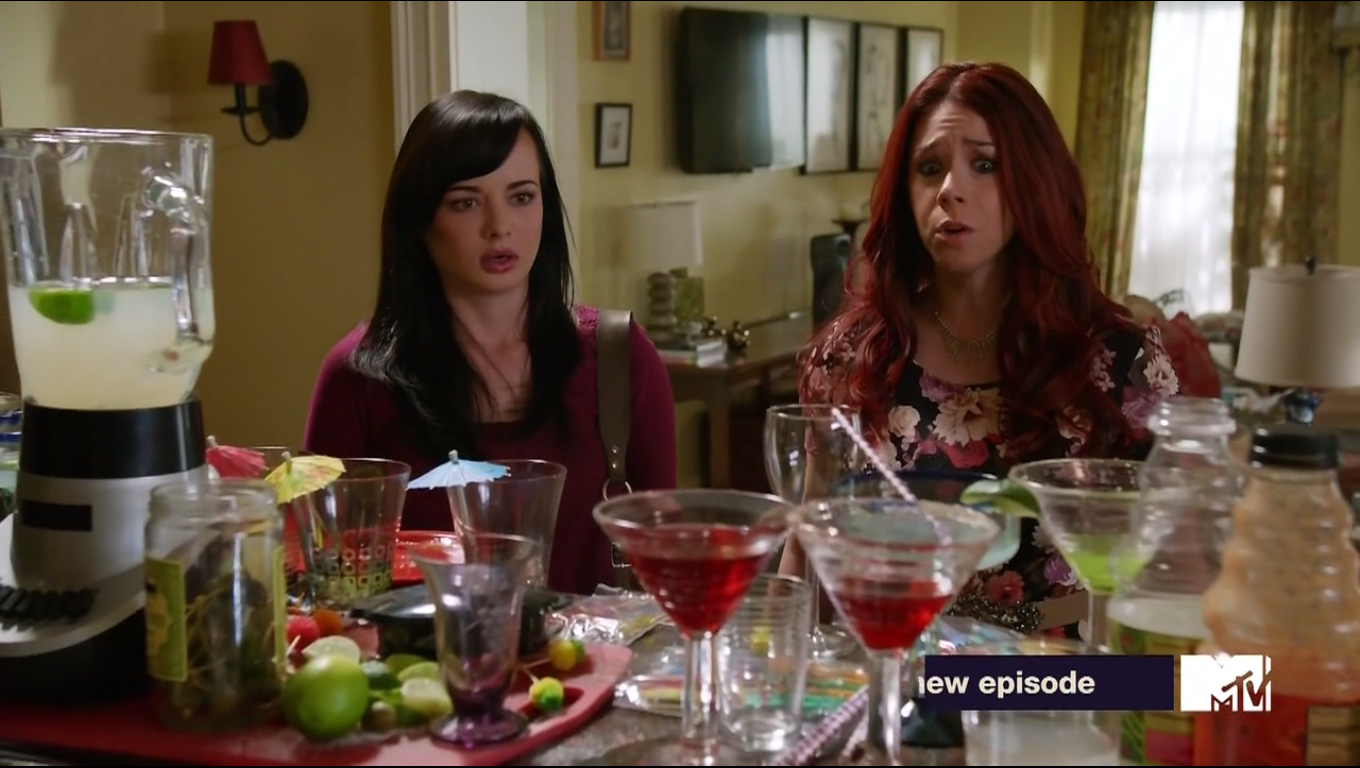 Jenna’s mom has offered Val a place to stay, so she and her three cats will be staying at the Casa de Hamilton for the next few nights.

Because the liquor stores have been cracking down on fakes lately, the girls head to the friendly neighborhood market “Top Valu” to continue their search for booze. I forget sometimes how different liquor laws are in different states because in New York you cannot buy liquor at a grocery store. When Jenna said she was forgoing the liquor store for a grocery store, I just assumed they would be getting a few thirty racks of shitty beer. I was very surprised that they were actually getting handles of vodka. Jenna tells Tamara “to be cool bitch, be cool” when they purchase the liquor, but as soon as she gets to check out Jenna starts spewing her fake life story to the checkout girl. She talks about her husband’s job at “the bureau” with his 501k plan and that she decided to come stock up on paper products and vodka after dropping her kids off at daycare. So far the girls are batting 0 for 2. 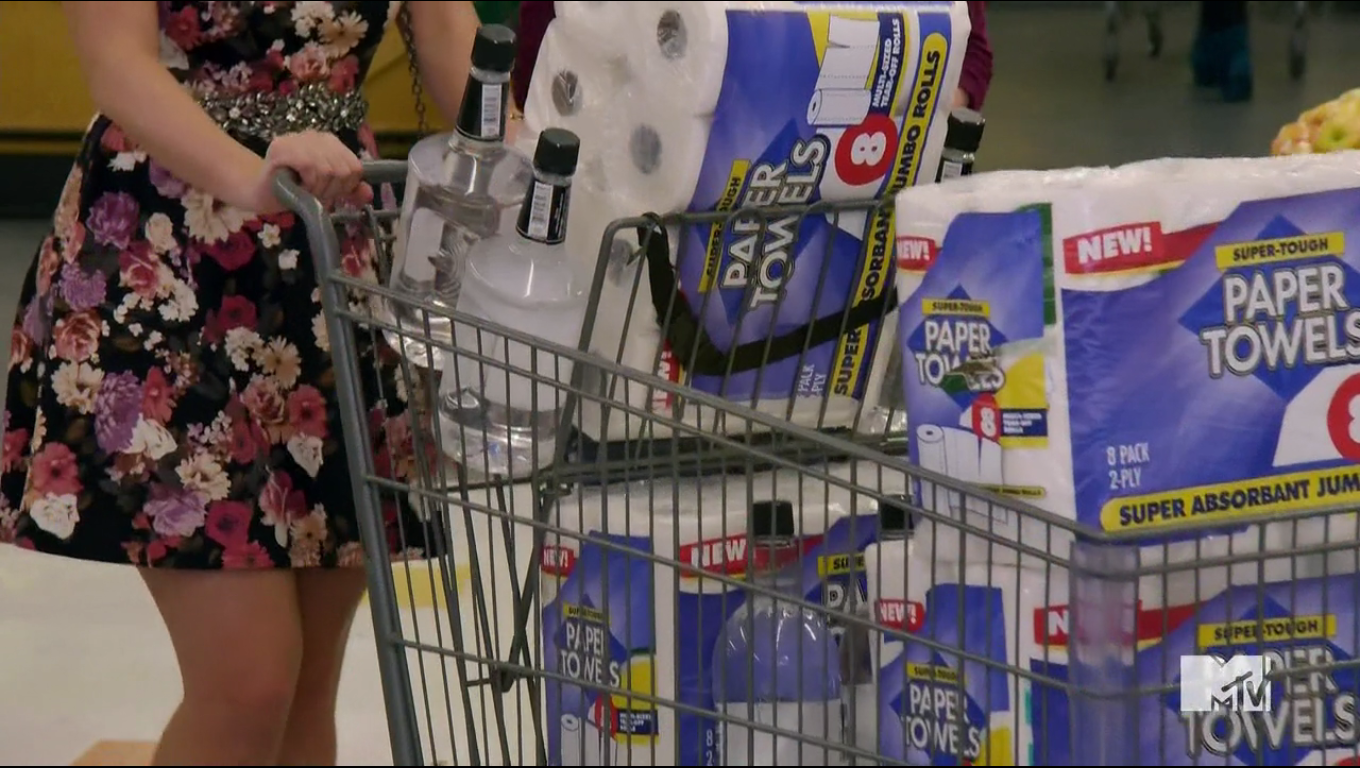 The final stop on the booze hunt is the back alley of a liquor store. Jenna calls a creepy guy over to her car by saying

Jenna: Hey you! Yeah, you. So my friend and I were wondering if you could get us a little something something. We’ll make it worth your while.

While she is saying this, Jenna is pulling a wad of twenties out of her bra, and ends her sentence by biting the stack of bills. 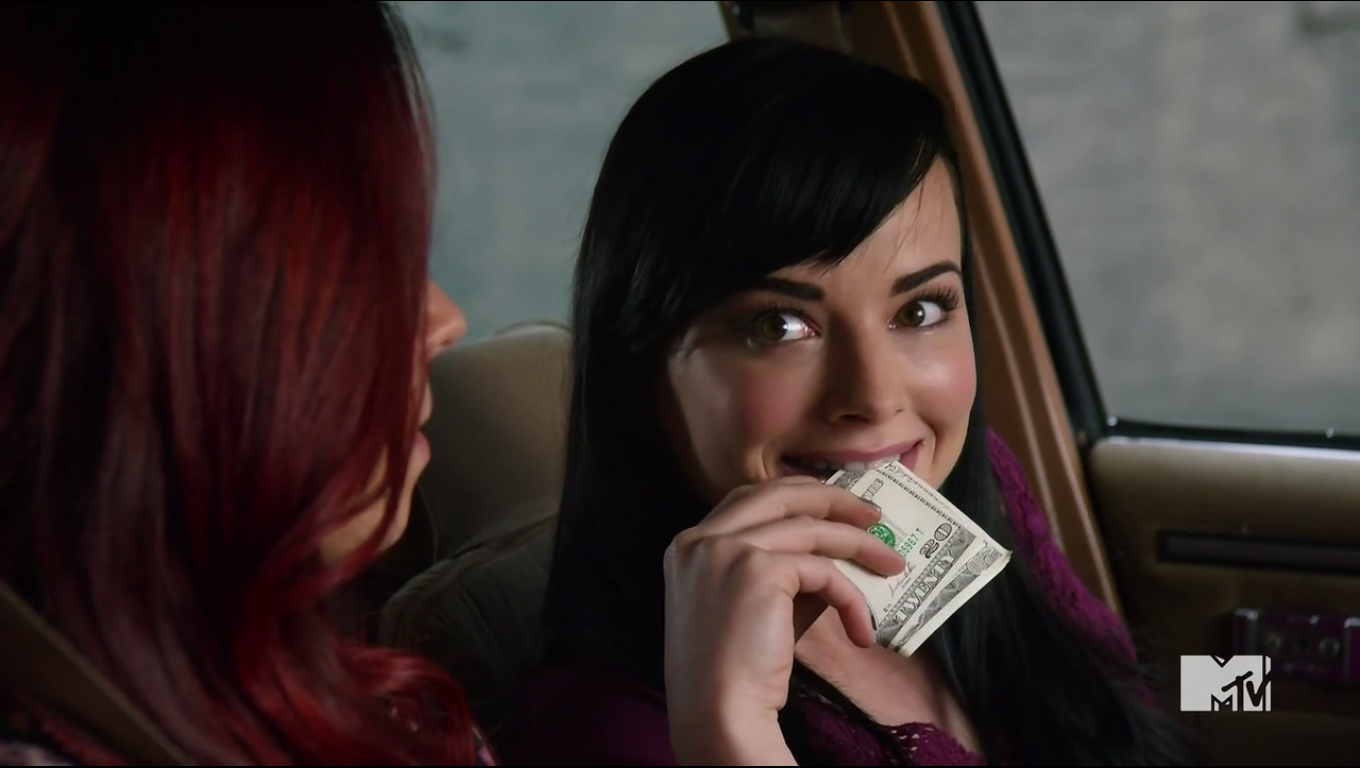 The guy freaks out and runs away from the car. This scene is so amazing. What could possibly be going through this guys head right now? What could he possibly think these two girls were asking him to do? Jenna and T do not get time to ponder this though, because Jenna’s mom pops up right next to the car. Lacey offers to buy the booze for the girls, which is probably the smartest move since her daughter was quite literally about to whore herself for a handle.

While Jenna and Tamara search for vodka, has already begun and has been stocked with alcohol. Jake decides that this beach party is the perfect time to apologize to an incredibly inebriated Matty. Oh man, Jake needs to get better at his timing. I cannot think of a worse time to confront someone than when they are angry and drunk. Matty is so angry and drunk, and starts verbally attacking Jake for always taking Matty’s sloppy seconds (which is sort of true).

By the time Jenna and T finally arrive, the party has already ended, and Matty can barely stand he is so drunk.

In Sadie News
Sadie’s storyline is completely isolated from every other character this week. After refusing to mop the hallways of her high school, she joins her mom for breakfast at the local diner. While Darlene orders cottage cheese and tomatoes from the “spa” menu, Sadie gets pancakes with extra butter and a large side of bacon. Sadie is not so bluntly bringing up one of the many issues that exists in her relationship with her mother, food. After the tense diner date, Darlene brings Sadie to the car dealership to buy her a new Fiat. This is one of the most bizarre overt product placements I have seen in a while. As Sadie walks around the car, the car salesman starts listing off all of the amazing feature of the new Fiat: a spacious interior that is larger than a NYC apartment, the nav console, the bluetooth and Beats soundsystem. Even though Sadie knows that her mom is trying to buy her love, which she point-blank calls her out on salesman, Sadie is not going to pass up a brand new Fiat.

The two sit in Sadie’s new car, and have this amazingly brutal and honest conversation:

Darlene: You were born to drive this car.
Sadie: Really, I thought I was born to eat carbohydrates?
Darlene: Honey, how do you remember all this? The way you hold onto this food stuff.
Sadie: Because it’s all you ever said to me. My entire life was framed around your obsession.

Darlene tells Sadie that she was just trying to help, to which Sadie replies “Why couldn’t you just accept me for who I was, like all the other mother’s?” Darlene says that she is going to try really hard to be the mother that Sadie deserves and Sadie tells her mother that she will try to forgive her. She doesn’t say it with any snark, or bitchiness, she says this with complete sincerity.

There are so many things to say about this interaction. First, I think that it is interesting how much this echoes Jenna’s relationship with her mother in earlier seasons. The series literally began with Jenna receiving an anonymous letter (which came from her mom) telling her to stop being a whiny loser and essentially become someone else. Lacey was a horrible mother, but through four seasons, Lacey has grown and her relationship with her daughter has deepened, and she had redemption. Sure, Lacey is not winning any mother of the year awards anytime soon, but he daughter forgave her, and they built a stronger relationship because of it. It is interesting to see remnants of that in Sadie’s storyline with her mother. Second, this dialogue highlights how much power the words parents say affect their children. Every time that Sadie looks at food, she hears the comments that her mom made to her about her body, and they haunt her.

Darlene takes this conversation to heart, and when Sadie comes home, she finds a note from her mom saying “I love you, and I always have.”

Val Quote of the Week:

Val: Oh, and don’t worry about the cats. They are at a very expensive cat hotel called the Pawliday Inn.