The live action adaptation of Artemis Fowl was released this past weekend and perhaps it was best that the film made its debut on the small screen. Based on the young adult novel of the same name by Eoin Colfer, the story follows twelve-year-old Artemis, a genius level criminal mastermind looking to save his father who has been mysteriously kidnapped. Along with his faithful companion Domovoi Butler (who acts as bodyguard) and Juliet (Domovoi’s younger cousin), the trio find themselves dealing with magical forces living beneath the earth.

The film is set in Ireland where Artemis spends his time between being bored in school and moments with his father who makes certain that his son knows everything there is to know about faeries, or the People are they are called in the novel. Artemis I appears to be involved in some big projects that have him gone from the ancestral home often. One day he plans on involving Artemis but soon he is kidnapped by a mysterious individual. This kidnapper calls up Fowl Manor tells the kid genius that he must retrieve the Aculos in exchange for his dad’s life. The Aculos is a magical object of immense power that’s gone missing. 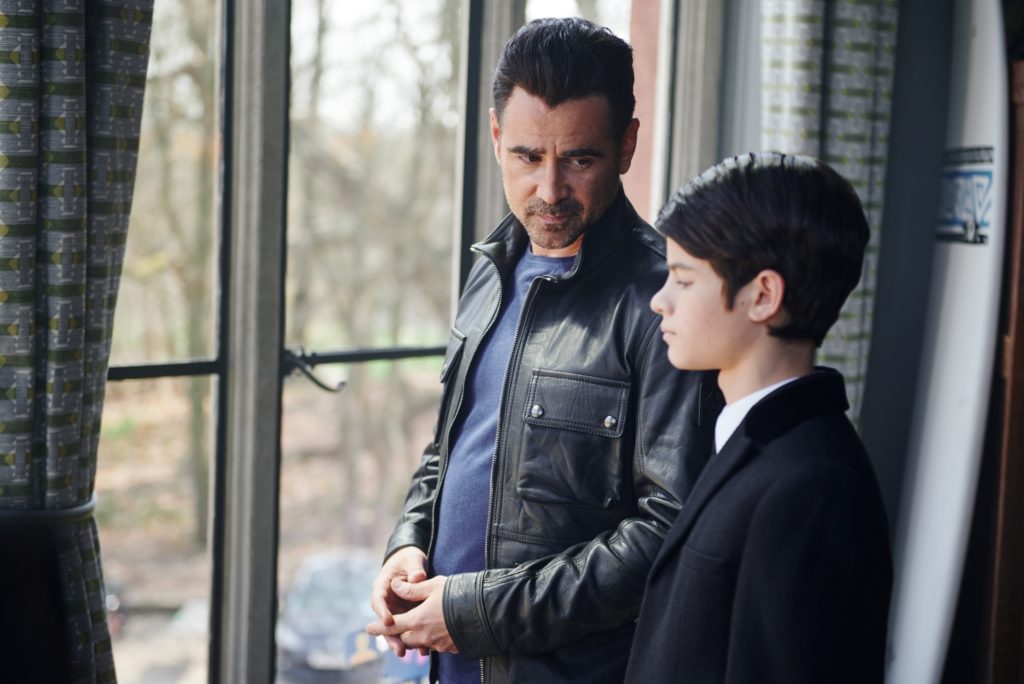 This is how Artemis learns that faeries are real and that his family has been studying them and collecting artifacts for generations. In order to rescue his father he hatches a plan to capture one of the magical creatures. He succeeds and manages to trap Holly Short of the Lower Elements Police. Artemis ends up using her to negotiate with Commander Root who has gone to the surface with all of LEPRecon to rescue their fellow officer.

As far as film adaptations go this one isn’t terribly good. Full disclosure I’ve only started to read the first few chapters of Artemis Fowl but there are already some stark differences that makes the book more compelling. The most important distinction in my view is that the live action version went for an origin story while in the novel Artemis is already controlling his family’s enterprises with his father missing and his mother indisposed with severe mental health issues (in the film Mrs. Fowl is dead). Part of the allure of his character is that he is incredibly calculated and remorseless in achieving his goals. In the film, Artemis seems quite watered down and more kid-friendly as an emotional boy who desperately wants his father back.

The film’s storyline combines parts from the first two novels loosely and unfortunately made for a weak and rushed plot. There was too much time spent setting up Artemis as a bored young genius and the rest was a lot of action with little substance. Granted there were parts that I enjoyed, namely the troll attack in Italy that does a good job in establishing Holly Short as a determined young elf with a heart. The giant dwarf Mulch Diggums was also a bright spot as narrator and lovable thief. I also appreciated Colin Farrell and Nonso Anonzie performances, the latter having surprising comedic chops that I hadn’t seen displayed in previous roles. The action sequences were fun and the beauty shots of Ireland was gorgeous.

Still, everything else from the elder Fowl’s kidnapping all to the end of the movie felt hurried. From Artemis trying to figure out a plan to save his father, capturing Holly Short, the arrival of LEP forces to the manor, discovery of the Aculos, and overall clever plan to triumph over the adversaries was a bit bland. While the film tried show that other dangerous faerie forces were at work through antagonist Opal Koboi, we don’t get a sense of the magnitude of her character as a future arch nemesis for Artemis. She very much seemed like a one-dimensional villain who wanted the Aculos for herself to launch an attack on surface dwellers.

My biggest overall gripe with the adaptation though is that audiences are just told significant information through dialogue instead of being shown. From the beginning the film has journalists from around the world explain that the head of the Fowl family was involved in criminal activity related to daring thefts shrouded in mystery. We never see any of these daring escapades, only that Artermis’ father disappears on trips.

Disney+ does provide additional deleted scenes including the trip to Hanoi where Artemis poisons a faerie to temporarily get his hands on the book of the People, a tome that each magical creature has that contains the laws they abide by. If only this wasn’t cut from the film because it actually showed a hint of how ruthless his character is.

At the end of the day though as a folklore and mythology geek I’m excited that Disney is interested in books of this genre. With a new Percy Jackson series in the works for the streaming service, perhaps a sequel to Artemis Fowl will prove to be better should it be greenlit.