‘Arrow’ Review: “So It Begins”

Get it together, Arrow! As per usual, the producers of Arrow have brought in messy and unnecessary components to the show, leaving fans confused and a little bit sad by the end of the episode.

Arrow reminds me of the time I wrote a summer reading essay about a book I’ve never read. (Oh God, am I turning into Oliver Queen?) The producers thought they knew what they were doing in the beginning of the season, but kind of wavered off with random plot twists to make it seem like they knew what they were talking about. “So it Begins” isn’t the best entry for Arrow’s fifth season.

Like… Quentin Lance as Prometheus? Really? The idea remains completely implausible. Arrow has underestimated its fans. You can’t add a red herring for the sake of putting a red herring into the show. My only hope is that this story line will be an interesting way to go for the coming episodes.

Throughout the episode, Diggle and Oliver were extremely reluctant to share information with the new recruits. I officially deem them unworthy and suggest we return to OG Team Arrow. I’m just kidding, kind of. But I do suggest that the producers either start giving those characters personalities or they actually disband the new team, because they are not fun to watch during the episode. (Editor’s note: Exactly! You don’t start working at a new job and whine when the boss doesn’t tell you everything about the company.)

“So It Begins” spoke of and discussed Oliver Queen’s ‘List’. Oh, boy. I haven’t heard that name in a very long time. Not since season one. Honestly, before the episode, it never actually came across to me how messed up having the ‘List’ really was. I mean, Oliver literally had a book of names he had to kill. That’s all kinds of horrifying.

Perhaps I had kind of gotten used to it, or season one purposely labelled the idea of the ‘List’ with a sense of normalcy so it wouldn’t seem like our main protagonist was actually a serial killer. But, you know. Whatever works.

This episode was not a total loss. We began to see the introduction of Prometheus, and we also were able to see one helluva flashback. (But that will be discussed later). Prometheus is as ominous as a villain could be, especially when he says, “So it begins.” No matter how cheesy, you’ve gotta admit that line got you wondering the outcome for this season.

I really want to know who’s under that mask. It better be a veteran character returning. Tommy? Roy? Slade? …Laurel? I’m on the edge on my seat, just tell me already! But can we discuss the media in this episode? “Throwing star killer.” Throwing star killer. That may be one of the worst names that the media could ever deem someone. And that goes next to vigilante guy.

Which brings me to the name Prometheus. I can’t help but wonder what connections the Arrow villain (reminder that Prometheus was never originally a comic) could have with Greek mythology. Perhaps his motive for wanting to possibly destroy the Green Arrow and the entire race of humanity is so he can start over and recreate mankind? Another idea could be that he believes the Green Arrow has granted him eternal suffering and this is why he wants to kill the Green Arrow. Just food for thought. 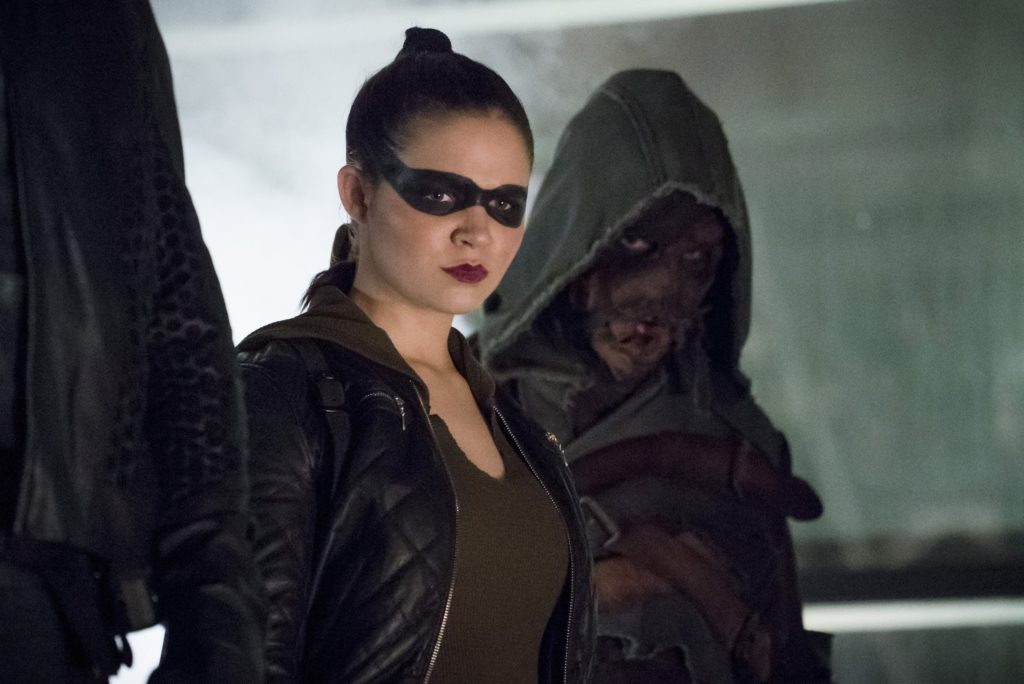 Prometheus has already shown that he knows of Oliver’s past, and the ‘List’. There could be a huge possibility that it could be Tommy (maybe it’s only a possibility because I want it to be a possibility so badly), but even then it wouldn’t explain why Prometheus has targeted Quentin Lance. (Perhaps Tommy blames Lance for Laurel’s death?) All this conspiracy thinking makes my brain hurt.

Speaking of which, at the end of the episode, we found Lance waking up after an, oh I dunno, alcoholic coma, finding jagged cuts on his arm and a clean ‘throwing star’ (so to speak) on his table. The episode ends zooming in to a look of horror on his face.

I am beyond disappointed that Quentin started drinking again. (Or more appropriately, never stopped). When he tried to explain his actions to Thea, I almost punched him in the face, which was pretty impressive. Because he’s a fictional character. On a TV screen. I certainly hope Arrow can pull off this alcoholic Lance arc. Otherwise, the show could easily turn offensive or irrelevant.

Let’s talk about Olicity for a sec. Felicity stole police evidence off of her boyfriend’s desk. Trouble in paradise? Ship or no ship? Discuss.

And Susan giving Oliver her number? Um, no. Talk about unprofessional. Also, we basically all know Felicity and Oliver will always be the end all, be all (unless Laurel comes back to life, fingers crossed), so everything else is irrelevant.

Wait, let me explain that for a second. Laurel and Oliver are together in the comics, so there has always been a huge chance that they would marry and have their happy ending. She even confessed her love before her death as a tribute to the comics. There is always that possibility. But alas, the fans have spoken. Olicity it is.

The flashback this episode might have been better than the actual plot-line. As Dolph Lundgren is welcomed by fans with open arms, he does not disappoint. Kovar has been introduced to the season. And may I add, he snapped a guy’s neck in the first 30 seconds we met him. Which means, he will fit in nicely. Welcome to Arrow, Lundgren.

I just need to– everything about Anatoly is perfect. His lines are scene-stealers. Can he be in every season ever, now, please? Classic. 10/10. Please stay forever. Come to Star City. For some reason it’s always night time, but at least we have a hot mayor.