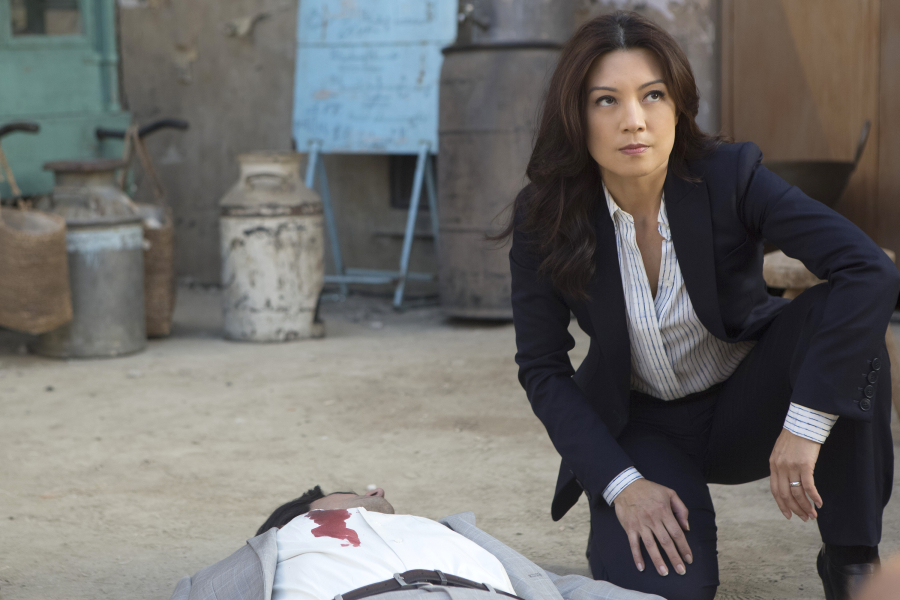 Ever since our first introduction to Melinda May in last year’s Agents of SHIELD pilot, the character has been somewhat of an enigma — a person we’ve struggled to peel back the layers of and figure out. Even though “Melinda” only showed us a small fragment of May’s personal life (albeit one that had a huge impact) we know there’s still more we can learn. But this episode shone a light onto the character in a way that we haven’t previously seen, and thanks to the amazing talents of Ming-Na and the writing staff, it delivered.

For starters, seven years ago, May was a very different person. She was happily married. (Hi, Andrew!) She was enjoying life. She was looking forward (and trying) to starting a family. She had a close working relationship with Coulson. (The timeline for this is unclear – if the Marvel Cinematic Universe happens in real time, which is how it’s been more or less explained, then 2015 would mark around three-ish years since the events of Avengers and Coulson’s death. This could and is probably well before that, but Coulson talks about Fury wanting to start a team — a “new initiative,” which makes it sound like he wants to start what Coulson assembles as his primary team. It’s possible that this was in the works before New York, and then it picked up again after everything happened and after he came back to life. But there’s really no clarification on how these events match up to what we know has happened in the shows and movies.)

In any case, we’ll put the timeline rant aside for a bit, because May joins Coulson on a mission that involves a “gifted individual.” The index candidate is a Russian woman named Eva Belyakov, who possesses enhanced strength, and S.H.I.E.L.D. wants to take her in. Only problem is, they want to do it stealthily, for obvious reasons. Coulson is briefed about making sure she cooperates. If she doesn’t? “Call in the Cavalry.” We now know “The Cavalry” to be Agent May, but in this case, it’s an entire team of agents. Chew on that. Also?

Coulson and May arrive at a black market and find that their target is already meeting with someone. Coulson starts his pitch to bring her in, which goes just about as well as you’d expect. (Maybe he needs to take some lessons from a certain ex-carnie archer.) May manages to catch both a child running and a man coming at the child with a gun and everything goes to chaos. The child is taken hostage, and Eva disappears.

Coulson and his team figure out where the man is hiding out and when things start to go south, Coulson wants to send May in, despite not being authorized. May ends up going in anyway, but not before getting some advice from Andrew, when she calls him asking how to deal with what she knows is probably the scared child she probably has to save. I loved this scene, and I really love the chemistry of these two actors together. I’m so glad we got Andrew back for a bit.

Back in the present, Bobbi and May have a chat about powered people, and about Coulson’s true motives. May wants to take charge of the base and agrees to talk to Coulson, but wants to do it her way — and peacefully. Bobbi at least agrees to that, and it’s nice to have more evidence of Bobbi truly being on S.H.I.E.L.D.’s good side. Bobbi calls May out for being hurt about not knowing that Coulson was working with Peterson, and the two have an amicable chat about their loyalties. Bobbi does want to build S.H.I.E.L.D. back up, but May feels frustrated. “You’re worried I don’t understand your choice,” she tells Bobbi of picking Gonzales’ side over Coulson’s. “Sometimes the price of doing the right thing is that no one will understand.” Bahrain, much? At least we’re starting to understand where she’s coming from. The episode really did a wonderful job at bridging the important parts of May’s flashbacks to her decisions in the present, giving us a clearer understanding of her thoughts.

At “afterlife,” Gordon is trying to help Raina as best he can. She’s not being very compliant, though. She hates her face, she’s tired of being chained and hidden away, and feels spiteful for Skye, who got the better end of the deal with her powers and changes. Meanwhile, Skye and her mom (though she’s not yet aware that’s who Jiaying is) talk about her time as S.H.I.E.L.D., and her powers. Jiaying encourages her to try controlling them again, and not to be afraid of what can happen if she pushes too far. You know the saying “you can move mountains?” Well, Skye literally moves a mountain (okay, she makes an avalanche happen, but close enough) with her mom’s help.

Skye ends up asking Lincoln about Jiaying’s role, but all Lincoln will tell her is that she’s “in charge” and that she’s never trained people before — Skye’s the first person to get that honor. It’s enough at least to convince Skye to continue her lessons, this time using glasses filled with water that she tries to make vibrate. (She pretty much almost gets it, and it still earns her praise, so points for Skye!) Everything is going well — too well, essentially. Because Skye’s never really had a home before, except for S.H.I.E.L.D., and everyone has always shipped her off every time she’s gotten comfortable somewhere. What follows is basically an open letter of Skye’s emotional state over never belonging to anyone…she doesn’t even know her own birthday.

And then: “You were born on July 2.” It’s a nice way for Skye’s mom to reveal herself, before she tells her daughter that she hadn’t said anything because she wanted it to be Skye’s choice to go through the mist and accept her destiny. Skye is obviously overwhelmed, though shocked and happy, but Jiaying tells her they have to keep her identity a secret. Skye tries to understand why her mother runs things here the way she does, which leads Jiaying to tell her the story of Melinda May. And this is a really awesome sequence, where the past and present kind of collide in a way that absolutely fuels the story. I give kudos to whatever writer or director decided to frame the narrative in this way, because it absolutely truly worked.

Of course, Skye recognizes Bahrain and makes the connection the moment Jiaying starts telling her about the woman who fled after stealing the terrigan crystals. Between interspersed flashbacks, Skye struggles to comprehend this information, and we see May going in after Eva, who is apparently too powerful for her own good. The agents that have vanished, it turns out, are brainwashed by Eva’s powers. The two end up in an intense fight, which ends up with May getting shot in the leg, and damn, Agents of S.H.I.E.L.D. is on point with all these fight scenes this season. May eventually gets the upper hand, though, and kills Eva — though she clearly doesn’t want to.

Via Jiaying’s narrative, we also learn that even though Eva was dead, the brainwashed soldiers weren’t snapping out of their trance — because Eva hadn’t stolen those crystals for herself. She had stolen them for her daughter, Katya, the little girl that May was trying to save. And once May realizes who the source of her conflict is, she knows she has no choice but to kill her.

The show could have made this moment simply about May killing a child, but instead, it went further, with Katya – clearly stuck in a mindset she wasn’t in control over – killing her mother. She tries to reach out to May as her new mother, and considering May’s thoughts and feelings about having a child, she’s not doing too well with this. May tries to talk the child down like Andrew told her, but to no avail. It was a profound, intense moment sold by Ming-Na Wen, as well as Clark Gregg, especially in the aftermath of the entire situation, and when Coulson finally makes it inside and finds May holding the dead girl in her arms.

It was “The Cavalry” that saved the agents that day, as the story goes, but really, it was just Agent May — one person who took down an entire army, a powered human, and a child. The aftermath of it shakes her to the core, and not only does she break down, but it’s the start of her descent into a very different person…the person we saw at the beginning of the series, who seemed emotionless. Indeed, the scene that we end on in May’s flashback is a mirror of how we began, right down to the morning routine, but entirely different. There’s no fun banter with Andrew this time, there’s no hope and no levity. There’s just pain and sadness.

As Skye’s mom finishes up her story, she eventually gets to her point: she runs things at “afterlife” this way because of the fact that a mother would do anything to protect her daughter. In that vein, she tries to get Skye to agree to one dinner with Cal, after which she promises she never has to see him again. Surprisingly, Skye accepts, and we get to see Cal’s attempt again as a father. (Don’t worry, he cleaned up nice.) He also tells her what her birthday is (1988, she’s 26, everyone!) and as they sit down together, Lincoln brings them dinner. And takes in the scene around him: Cal bringing Skye daisies, a happy family talking. He realizes it’s exactly the same thing Raina had said to him earlier in the episode. Seems like Raina didn’t just get thorns – she got the power to see the future, as well. And something tells me that’s going to be a very important and significant detail going forward.

Back to the other present timeline of our story: When May comes to Simmons, she alerts her that the thing she’s working on is actually Deathlok’s battery pack. Yeah, we didn’t know either. May is still trying desperately to believe in Coulson, but both she and Simmons are finding it incredibly hard to feel trustworthy, knowing what Coulson has been hiding. And Simmons is afraid of what else they’re going to find if they keep digging. There’s too much that they’re coming across — a secret life, secret files, secret meetings, even money stealing. Not to mention, apparently Coulson and Andrew have been consulting behind May’s back. May realizes that there’s a chance Coulson is building another base for powered people, that he wants to them them on the frontlines, but he wants to do it without telling anyone. She asks Simmons to open the toolbox. And, well…

As we know, that toolbox is with Fitz, who we see in our tag. He opens it in the bathroom, and it appears to be a bunch of holograms with information. So what does he do? He calls Hunter and Coulson, of course. “Would it still be okay if I came and hung out with you?”

Fitz, I think you’re going to get back in the field just fine.