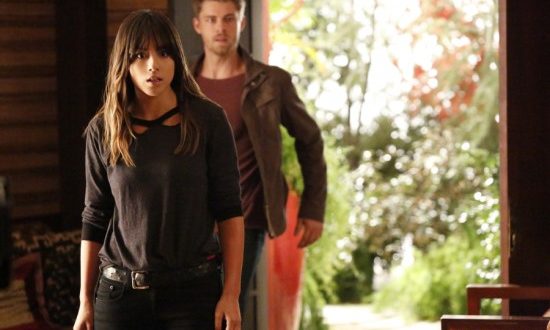 As it turns out, “afterlife” is where we find Skye has been taken after Gordon rescued her from the forest last week. It’s kind of like China and kind of like a Buddist Temple and also kind of like Rivendell, and it’s called “afterlife” because no one really knows what to call it. More importantly, it’s a place where people with powers are taken, in order to “transition.” Lincoln (Luke Mitchell) is Skye’s “transitioner” whom she meets when she wakes with some strange acupuncture treatments. (He immediately offers her popcorn, which is always a nice way to start a relationship. At least, in my opinion.)

Skye isn’t interested in popcorn, though. She’s scared and worried and wants to get in contact with her friends, which seems to be out of the question. She’s also concerned that people are looking at her strangely. Lincoln tells her that it’s because she’s, well, different. Everyone in “afterlife” has a gene in them that allows them to change, but while they sit and wait around for their day of glory – if it ever comes – Skye went through it the old fashioned way, with a diviner and a Kree Temple. Apparently, that hasn’t happened in years.

But being a “celebrity” is the exact opposite of what Skye wants. People may be envious of her powers but she never wanted them, and she also knows that Gordon took Cal and Raina. Lincoln brings her to his room and tries to indulge her with pizza night, even though Skye still wants nothing more than to get rid of the thing that has caused so much grief in her life. But Lincoln tells her the transition is now irreversible – her powers are here to stay.

To help win her over, Lincoln brings Skye to the top of a mountain, which I guess is kind of like an form of odd therapy. He shows off his own powers, and tells her that when he came out of the mist, every cell in his body had a different electrical charge. “Skye’s the limit,” he says as he elevates her by using only his energy. Pun absolutely intended, by the way. It’s a sweet moment and Lincoln isn’t playing around – he’s not out for some ulterior motive (or so it seems.) He’s just trying to genuinely help.

Coulson and Hunter, meanwhile, are off having some buddy cop adventures that are pretty amazing. From stealing a truck (nice work, Hunter) to holing themselves up at Banner’s cabin where Skye was taken (and finding footage of what happened), it’s really fun to see these two working together, even if Coulson is fighting some major guilt over losing Skye. He feels responsible for what happened, and it’s clear he really thinks of Skye as his daughter – and as someone who needs to be protected. But he also feels that he fails S.H.I.E.L.D. as a whole with Bobbi and Mack’s secret, and you can’t blame him for wanting to accept Hunter’s whiskey. To Coulson’s credit, he’s not angry, at least, not in the way May is. He understands both sides of the story, even though Hunter can’t. It’s nice to see Hunter on Coulson’s side and so dedicated, especially after everything that we’ve heard about him being flighty. And it’s clear he really wants to do the right thing and be a part of a team he cares about. I just hope that means Bobbi and him get to reconcile in some way down the line, because I’m still all aboard that train.

Coulson ends up triggering the alarm on the safehouse which Hunter is pissed about, but as it turns out, Coulson wants them to be found. He wants to take down the carrier, and he has reinforcement on the way – only one person he’d trust – the identity of which he keeps Hunter in the dark about. If it’s not May, then who might it be?

Deathlok. Yep. Coulson has called back Deathlok. Kudos to Marvel for keeping the character’s return pretty much underwraps, because I would’ve never expected him to show up like that. It seems Deathlok is definitely reformed (and knows how to fly a helicarrier, which gets him definite points.) Coulson seems to be building up a nice little team here between Deathlok and Hunter, but I have to wonder what his eventual end game is. He understands that Gonzales isn’t exactly out to get him, and he said those words himself. But it seems like he’s still trying to protect as much as he can from his own life, building his own side of this war.

Back on the Bus, Gonzales argues with Bobbi about what happened with Skye. Bobbi makes it clear that she’s on Skye’s side – and she also defends Coulson while she’s at it. Points for Bobbi! They still need to get into the box, though, and for that, they need Fitz’ scientific mind. Gonzales tries to casually bribe both Fitz and Simmons by appealing to them, telling them that there are no prisoners here – they’re all S.H.I.E.L.D. agents wanting to do the right thing. But FitzSimmons remain loyal to Coulson, refusing to help.

And as it turns out (unsurprisingly), May is remaining loyal to Coulson, as well. When Gonzales asks her if her ties lie with S.H.I.E.L.D. or Coulson, May answers that they’re the same. Gonzales firmly believes that with Coulson’s alien DNA, he should be on the Index, reminding May that “you of all people know what happens when powered people lose control.” We get a shot of a file that says Behrain, another ominous reference to having to put someone down (“isn’t that why they call you the Cavalry?”) and given that next week’s episode is entirely Melinda May focused, it’s safe to say we’re being set up for some crucial May back story that will no doubt inform our current plot.

Gonzales isn’t exactly happy to find out that Deathlok is working with Coulson, along with Hunter. He decides then and there that he wants The Bus, and he also wants Agent May – easier said than done, as we know. Gonzales offers May a seat on their board (no catch, it seems), and then tells her that they’re going to bring Coulson in. Remember: Gonzales doesn’t want enemies. Not when there’s a bunch of new threats out there.

Gordon appears to Cal, who is upset with his treatment. Cal isn’t dumb – he’s figured out they’ve found Skye, and goes into complete “crazy desperate dad mode” as he ends up in a fight against Gordon. He loses, obviously, because you can’t really win against an eyeless Inhuman, but when he asks why he can’t see his own daughter, Gordon tells him it’s because he has no self-control. Cal’s actions (or history) hasn’t only sealed his fate, but the fate of his daughter as well…which is something that doesn’t seem like it will bode well for Skye down the road.

As Skye and Lincoln continue their talk about powers, Skye figures out Raina is actually in the same place, despite Lincoln saying otherwise. It’s interesting to hear Skye freak out and talk about how “I am not what she is,” when that’s what most of her friends are saying, just in another way. And it’s an interesting dichotomy, because Skye is so terrified to be what Raina is. Yet, as Raina implies, they’re more parallel than they want to admit: both orphans, both given their powers without wanting them, and both trying to figure out where they belong. Skye finds where Raina has been hiding and argues with her about what she did in the Temple, blaming her for what happened to Trip. Her powers get the best of her, but before she can actually let loose and kill Raina, she’s interrupted and saved by…

…her mother. Yes. Skye’s mother. Not that Skye knows that yet. But we know it, and I can’t wait to see what this means. Mom talks with Skye and convinces her to stay, telling her that she would be her guide and train her, if she wanted to remain in afterlife. And maybe it’s the fact that, well, Skye’s mother knows how to talk to her, but Skye accepts.

So what does Skye’s mother do next? Shows up to Cal via those teleportation powers, and confirms that it is their daughter who has come back to them. The family drama is real…and it’s about to get a lot more complicated than Coulson is prepared for, now that both parents are ready to fight for their Daisy.

It’s a bit of a gut punch when we end the episode with Fitz leaving. But remember, Fitz finds out via Mack that Simmons has gone ahead with opening the box, and the fact that she’s apparently broken their shared trust angers him enough to realize he can’t stay around. Even though we got to see Simmons stand up to him, it still hurt to see Fitz leave for good — yet while we mourned the apparent loss of our Science Bros, the payoff was worth it. We ended the episode with Simmons apologizing for the fact that she just couldn’t figure out how to open the box, and that it was pretty much useless. But when Fitz got into a cab and opened his bag, the real toolbox was inside…along with a note from Jemma and a sandwich just the way Fitz likes it. (Throwback to season one, everyone!)

FitzSimmons are back. And they’re not letting anything bring them down.

What did you think of the episode? Sound off, and let me know!

Not only does the new Spider-Man deliver, it exceeds expectations.   I’ve been a Spider-Man …