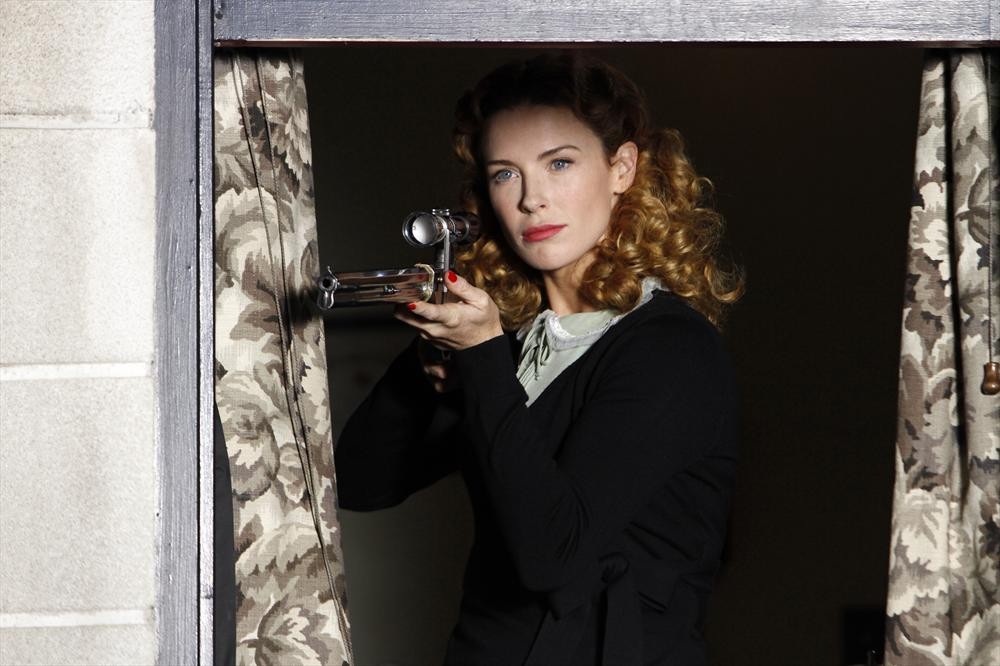 You know why I love Agent Carter? Because it consistently proves that while it’s a show about espionage and strong female characters and war, it’s also fun. I like when shows are fun, and I like them more when they’re entertaining and well-written. Agent Carter, so far, as managed to be all of those in my book.

As we slide into the final stretch of episodes, we’re finally starting to see a bit of payoff in what has been, up until now, a tangled run of storytelling. While some have criticized this for making the show “dull” or “boring,” I challenge anyone to watch last night’s episode and not appreciate the lead-up. Peggy Carter is an established character – but her world, to many, is not, and her own story needed a chance to be unraveled before it could be understood.

Last week, we saw Peggy and the Howling Commandos travel to Russia, where they unearthed, among other things, evidence of the Black Widow program. Dr. Ivchenko, fresh released from his cell, is now back at the SSR and talking to agents about The Leviathan. Peggy tells Dooley that she believes Kreminski was killed by a girl like the one they saw in the orphanage, and surprisingly, Dooley lets her take the lead on that breadcrumb. Naturally, Peggy enlists her new best friend/spy buddy to help her out with some investigation. (Murder BFFs, seriously.)

While Jarvis is a natural at helping Peggy out of tight spots, he’s not so much of a natural when it comes to hunting down Stark’s many, many women. (Must be hard to be the wingman of a rich womanizer. I feel you, Jarvis. I do.) Peggy is specifically looking for a woman with scars on her wrists, realizing that whoever she’s looking for would probably have marks from being handcuffed to the bed, like the girl they found in Russia.

Back at the office, Ivchenko is having a long discussion with Dooley over drinks, partially due to the fact that Ivchenko has a nifty hypnotizing ring that he’s using on everyone he talks to. Dottie visits the dentist’s office across the street from the phone company, and we already know this isn’t going to end well — sure enough, the doctor ends up with a drill in his eye while Dottie readies a sniper rifle and aims it towards where Dooley and Ivchenko are having their conversation. Obviously, our first thought is that she means to assassinate Ivchenko, and it’s a pretty ingenious move on the writer’s part, because I was completely thrown when Dottie used the gun to flash some sort of signal instead while Ivchenko communicated stealthily to her. The message? Kill Peggy Carter. We should’ve known better – Dottie was the girl at the beginning of the episode who was in Russia when captive men were being forced to join the Leviathan, and Ivchenko was there.

This was our first time seeing Dottie in action after her official introduction as part of the Black Widow program, and I couldn’t be more pleased with how she’s fitting into the universe. In fact, I’d venture to say it’s the smartest thing Marvel could have done. Dottie is not just a window to someone we know and can relate to (Natasha), but she provides a heightened sense of terror in a world where the most dangerous things have not been inventions or objects, but spies and patriarchy. Bridget Regan is absolutely fantastic in the role, and she clearly enjoys every second that she’s on screen — it’s a joy watching her work.

Sousa has paid a visit to the milkman who Peggy beat up a few episodes earlier, offering him a shortened sentence, if he can tell them who attacked him. Sousa pulls out Peggy’s picture, which the man confirms pretty quickly, and with that final nail in the coffin, the dominos begin to fall in Peggy’s world. When she goes to meet up with Jarvis at the Automat, she’s cornered by a bunch of SSR agents and quickly realizes that they’re not there for coffee – which results in a pretty spectacular fight sequence that had me fist pumping in my own apartment. Peggy Carter, actual damn hero.

Peggy does manage to escape but is cornered by Thompson, who she promptly knocks out. She’s then cornered by Sousa, and while she calls his bluff on shooting her, Peggy also knows that there’s nowhere else to run – her cover is blown. She returns to The Griffith with only one goal in mind – get Steve’s blood (be still, my heart) and manages to get cornered there, as well. Peggy makes a narrow escape by using the window, which conveniently leads her to Angie’s room next door, which conveniently puts a smile on the faces of fans everywhere, including me.

Angie uses her wonderfully authentic acting skills to distract the SSR guys from searching, allowing Peggy to hide safely, though her cover is finally blown here, as well – even if Angie doesn’t know the nature of Peggy’s real work, at least the secret’s out. For what it’s worth, Peggy seems relieved to not have to lie anymore, and to me, the whole scene is really an indication of how much Peggy has come to trust Angie, even without knowing it. They may not talk all the time and share all their secrets the way best friends do, but they do understand each other, even if Peggy tries to close herself off and even if Angie gets frustrated with Peggy’s secrets. It’s so refreshing to me that Agent Carter focuses on strong female friendships built on this kind of foundation, and I wish more shows did the same.

Because Angie trusts Peggy, she calls her family and gets her a car so she can escape — but before she can make it out of The Griffith, Peggy runs into Dottie, who takes her down by kissing her and knocks her unconscious from her lipstick (ironically, Peggy’s own.) Dottie, you made a lot of people smile last night. (The moment is also a fun callback to the first episode, where Peggy used that trick lipstick at the Spider.) She’s taken in by Sousa and Thompson, though she does manage to catch the marks on Dottie’s wrists before she passes out, and I can bet that realization will come into play next week.