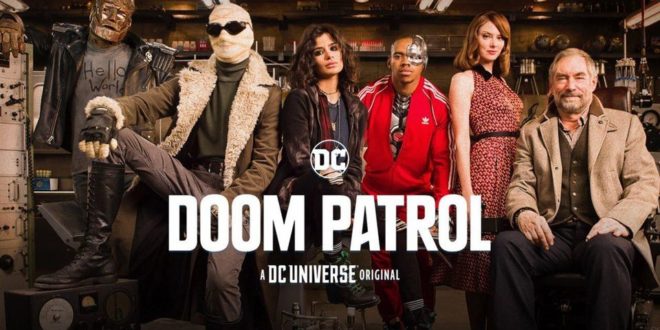 A Love Letter to Doom Patrol

Why the strange DC Universe show Deserves a Second Season

If you haven’t heard by now, DC Universe is in an interesting spot. With the streaming service’s Swamp Thing being canceled after its first episode, many are curious to what the future will hold to the company’s ambitious foray into its very own entertainment platform.

The service seems to be creating new content and has even renewed its flagship show, Titans. Yet, one show remains in limbo, the widely popular and refreshingly unique Doom Patrol.

This, quite frankly, is a travesty that needs to be rectified immediately. When the misfit gang of “superheroes” were introduced in episode 4 of Titans (serving as a backdoor pilot), they served as a welcome departure from the stagnant, grayscale aesthetic anchoring the show in gritty realism. So, naturally, when Doom Patrol was announced as its own series, I was ecstatic and curious.

Titans felt a chore at times to watch, with some interesting story progressions, but it would have been more beneficial as a series to binge, instead of the week by week episode drop. Doom Patrol not only captivated me, but it made me anxious about when the next episode would come. The 15-week journey took me along for the ride.

When I watched the pilot episode, I found myself trying to articulate to friends what the show was. I would say things like “It is weird but in a good way. It seems like a much better attempt at what Suicide Squad was trying to do. It has a crazy cast; just watch it!” As the weeks progressed, the writers truly flexed their story muscles by tackling head on the seemingly Herculean balance of strange goofiness and serious life-altering dilemmas. I went back to those same friends and said: “This is some of the best TV out there right now, and you need to watch.” Many laughed and were puzzled, but I stand by what I said: Doom Patrol is one of the best TV shows of 2019.

Wow, what a claim, right? Wrong. Look at what this show boosts.

Two major characters that are in conflict throughout the show’s run are Dr. Niles Culter aka “The Chief” and Eric Morden aka “Mr. Nobody,” played by Timothy Dalton and Alan Tudyk, respectively. JAMES BOND and WASH, people.

Not to mention the career resurgence of everyone’s favorite 90’s action star, Brendon Fraser. Yes, the man is back in action and gives a stellar performance that balances an over-the-top performance and a subtle emotional presentation as Cliff Steele, the former race car driver but now Robotman. No, you aren’t mistaken, you read that right. No, it’s not a mistake (my editor can verify). Brendon Fraser voices a robot. A robot! (Riley Shanahan does the physical work of Robotman, and he nails it).

Plus, the rest of the cast delivers consistently solid performances that really flesh out the squad.

Diana Guerrero plays “Crazy Jane,” a woman living with 64 distinct personalities that provide her with an array of superpowers. With the concept seeming ridiculous, Guerrero grounds each character and succeeds in shifting fluidly through the different personalities, which is rewarded by the writers the more you follow her journey.

April Bowlby puts in a stunning performance of Rita Farr, an actress from the 1950s that encountered a toxin that turned her into an elastic plastic. This gives her the “ability” to shapeshift her body, but it mostly turns her into a horrible looking blob. Balancing the characteristics and personality of someone from the 1950s interacting with the modern world is a joy to watch. This is supplemented with the development of her character underneath a shallow exterior.

Matt Bomer, working in conjunction with the physical work of Matthew Zuk, delivered on a performance that exceeds expectations when presented with the character of Larry Trainor aka “Negative Man.” A former pilot that bonds with a Negative spirit during a horrible accident, Boomer takes us on an emotional journey as we are clued on the layers underneath his bandaged exterior.

To round out the Doom Patrol, Joivan Wade gives the audience a shining performance of Vic Stone, known to all of us as “Cyborg.” With the character’s recent introduction in the Justice League movie in 2017, the Cyborg Doom Patrol gives us is an excellent interpretation: funny, determined, conflicted, and the character with arguably the most heart on the show. His introduction on the show solidifies his place as the glue of the band of “heroes,” and his ongoing relationship with his father adds an intriguing development to accompany the main story.

The show, which is developed by Jeremy Carver and written with a plethora of writers, hits the mark with establishing a unique voice and tone for the show. To try to incorporate all the decisions and choices they make within the show would be a fool’s errand, but I am partial a fool. Doom Patrol utilizes narration, which allows them to break the fourth wall; a healthy dose of humor; tropes that include portals, different dimensions, and time manipulation; and narrative jumps along different decades that chronicle the character’s lives.

The writing does a phenomenal job of providing depth and careful character development for each character, and it rewards us with significant time to sit with each one. A recurring theme for Doom Patrol is that every member is extremely flawed and must choose whether to look past these flaws to become better or let the flaws continue to hold them back. With Mr. Nobody playing the antagonist to the gang, he makes it clear to them (and the audience) that he will expose any weakness he can to have it his way.

The depth and thematic elements do not just stop with the main characters; the show makes it clear that Doom Patrol is about finding one’s identity and gaining control over it. We see this throughout each character and their relationship with each other and their surroundings. Because of this, the writers are able to carefully navigate through topics like abuse, negligence, lies, adultery, discovering who you are with examples of sexuality and gender, and hiding who you are when influenced by the world you live in. One of the greatest things to come from this is the introduction of Danny the Street, a “sentient, genderqueer street” that appears where it pleases while not disrupting the world around it. Danny is home to those that feel estranged from the world and allows its residents to live their lives freely. This show is like Chicken Noodle Soup for the soul, but the chicken noodles look weird, and the broth smells a bit off, but it still tastes good . . . . .

I can’t stress how much I love this show. In a time where superhero media can be oversaturating, Doom Patrol gives a breath of fresh air, coupled with a fantastic color palette and narrative substance. We need a second season, and this show needs to continue to live and breathe.

In a world where we are getting bombarded with stress, hate, fear, and a scary world, Doom Patrol is our little Danny the Street.

You can Watch Doom Patrol on DC Universe

Bassam Kaado is a NJ writer that dabbles in screenplays, comic books, poetry, and articles covering various aspect of entertainment. In addition, he is an actor, rapper, and director. You can following Bassam @bkaado on Twitter and Instagram.
Previous Weekend Movie Brawl #3: Armageddon vs. Independence Day
Next ‘Stranger Things’ Season 3 Scene-by-Scene: Episodes 1 and 2 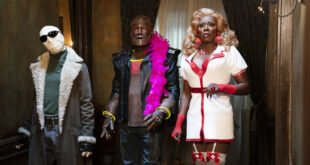 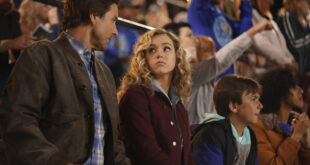 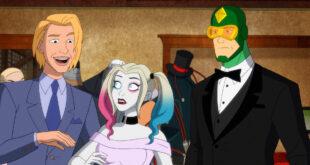 In the Season 2 finale, “The Runaway Bridesmaid,” Poison Ivy and Kite Man prepare for …