In the final episode of A Discovery of Witches season 3, justice comes to collect, revelations are had, and a new beginning blossoms. 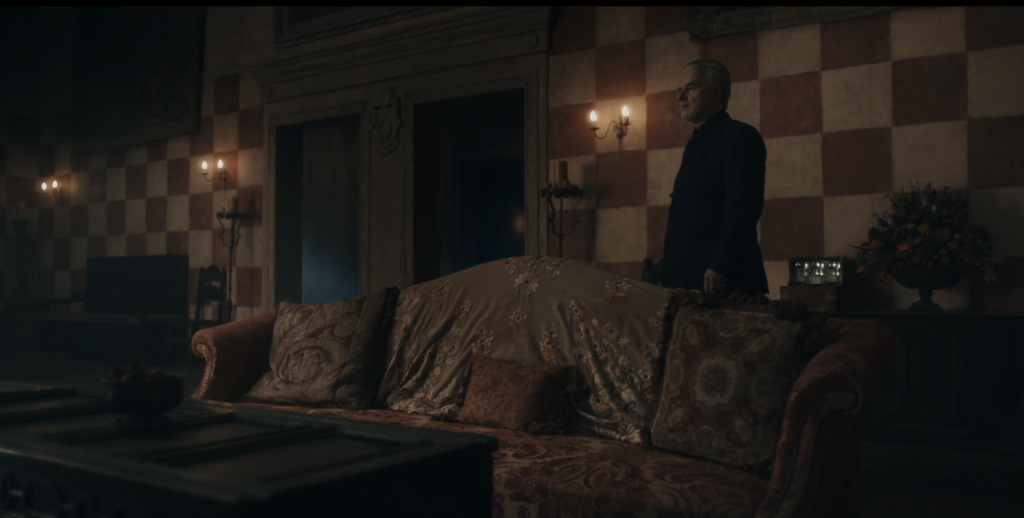 Gerbert pays a visit of pretense to Ysabeau, spouting their history together hunting witches. She tells him that things change. He implores her to give up her grandchildren to the Congregation so that she can be spared when justice comes upon her family for Matthew and Diana’s violation of the covenant. She aptly refuses and he leaves saying that he warned her.

At Sept-Tours, everyone is in high gear as the frantic search for Matthew begins after Benjamin sent over a video depicting his status as prisoner. Baldwin soon arrives to the astonishment of the others but turns out that Diana called him for help. She shows him the clip and the vampire notices that Benjamin is wearing Philippe’s watch. Baldwin goes into further detail that his father was a prisoner of the Nazis and there is no way Benjamin would have gotten that item without being present during the torture. He also reveals that Gerbert has been sponsoring and protecting the blood raged vampire as both hate the de Cleremont family.

Diana asks where Philippe was being held back then and Ysabeau answers in a hospital outside a town in Chelm, Poland. Baldwin says that he and Matthew had gone there to rescue their father, but it had been too late, it seems that Benjamin wants the same fate for Diana’s husband. The witch takes Baldwin, Gallowglass, Marcus, and Miriam with her while Hamish, Fernando, Phoebe, and Sarah are on surveillance duty to let them know if Matthew gets moved.

Once they arrive at the hospital, Diana quickly becomes aware of Satu’s enchantments as they come across fake Matthews with his heart exposed via an open chest cavity. The other witch keeps mentally taunting her with cries of babies and whispers that the others will all die here. This prompts the historian to cast a barrier spell to let her deal with the other weaver alone. It’s a tense moment as the two women finally come face to face again after what happened in season one. Diana asks why she is helping Benjamin when he has killed their kind. Satu begs to differ that the other witches were not their kind because they are special.

The other woman then brings up La Pierre and Diana says she still has the scars. Satu wants her to give up her secrets and the Book of Life but surprise, Diana reveals that she is the book now! This prompts a very angry response because she was supposed to have this destiny. Satu ignites flames in her hands and is determined to remove the magic from Diana, but the calm historian easily extinguishes the fire. It’s obvious that Diana’s understanding of her abilities is a lot more advanced than Satu’s and she tells the other weaver that their magic is the lifeblood of all witch magic. They could have been the greatest allies but it’s too bad Satu chose to use her power to destroy. Now Diana has no choice but to spellbind her.

It’s a good departure from the books to have Satu be Benjamin’s ally as opposed to Peter Knox, but the show kept to the original outcome where she is spellbound by Diana. I was wondering if there was going to be more of a fight between the women alas, we got a very quick resolution to this showdown.

Next is Benjamin and Diana uses the tenth knot spell on him, delivering justice through the goddess Diana’s flaming arrow. The vampire is no match and crumbles to ashes.

Matthew is taken back to Sept-Tour where he is given Ysabeau’s blood to heal his wounds. The process is slow as the damage to his body was extensive. Eventually though he recovers and sometime later, the geneticist helps figure out the science around what Diana discovered through the Book of Life, that all creatures were linked. Matthew explains that Diana and he both have daemon DNA and in fact a lot of them do. The amount all depends on how far back their daemon ancestry went. This is also the key in explaining blood rage as a human with enough daemon DNA becomes a vampire, the condition is triggered.

Diana says that the book revealed to her that weavers were born from witch and daemon unions with Matthew adding that is also the reason why she can carry his children. Chris drops the biggest bombshell that the waning of witch powers, the difficulty for vampires to sire, and the growth of mental health collapse in daemons all correlate to the decline of daemon DNA across all creature groups. 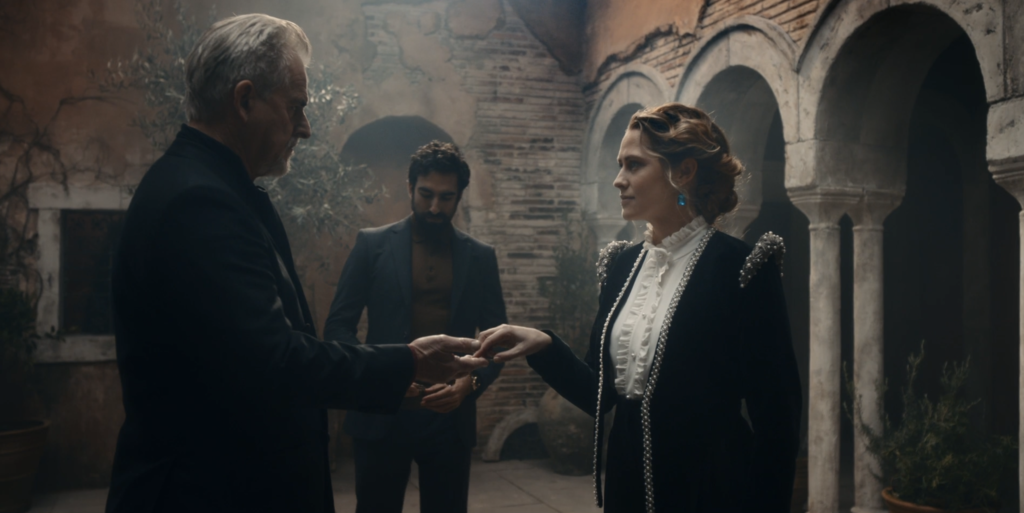 Diana wants to take all this knowledge to the Congregation to prove that the covenant is wrong but Baldwin interjects that he will be out voted and won’t be able to protect her. However, he comes up with a solution to have her be the de Cleremont representative because it was never stipulated that seat needed to be filled by a vampire. As Philippe’s blood-sworn daughter and recognized by Baldwin as such, she is a full-fledged member of the family.

They arrive in Venice much to the horrific surprise of Gerbert who threatens Baldwin that he’s signed his family’s death sentence. The older vampire attempts to counter Diana every step of the way, but she provides the evidence that they are all linked together and that it is daemon blood that is vital to the survival of all creatures. She proposes a motion to end the covenant once and for all, while Gerbert wants her executed for her crimes. But the schemer is outvoted and even Domenico turns on him. In episode six, the other vampire had been the one to tell Baldwin that Gerbert had been behind Benjamin without wanting anything in return. To make things all the sweeter, Diana then proposes that Agatha lead the Congregation and the motion is approved. Before she departs, she turns back and quietly tells Gerbert that his day of justice is coming.

In the aftermath, Agatha is reunited with her family, Domenico seemingly becomes the head of the vampires within the Congregation, Phoebe and Marcus get engaged, Chris and Miriam get closer, Matthew creates a plaque to honor his brother Hugh’s memory at Sept-Tours, Gallowglass and Matthew seem to come to an understanding at the younger vampire departs, Sarah gets closure from Emily’s death, Ysabeau and Baldwin remember Philippe, Jack and Marthe spend time with the twins, and Diana fills the pages of the Book of Life.

The episode ends with a party at Sept-Tours and Diana and Matthew dance as they’ve managed to overcome intense adversity through their love for each other, friends, and family. 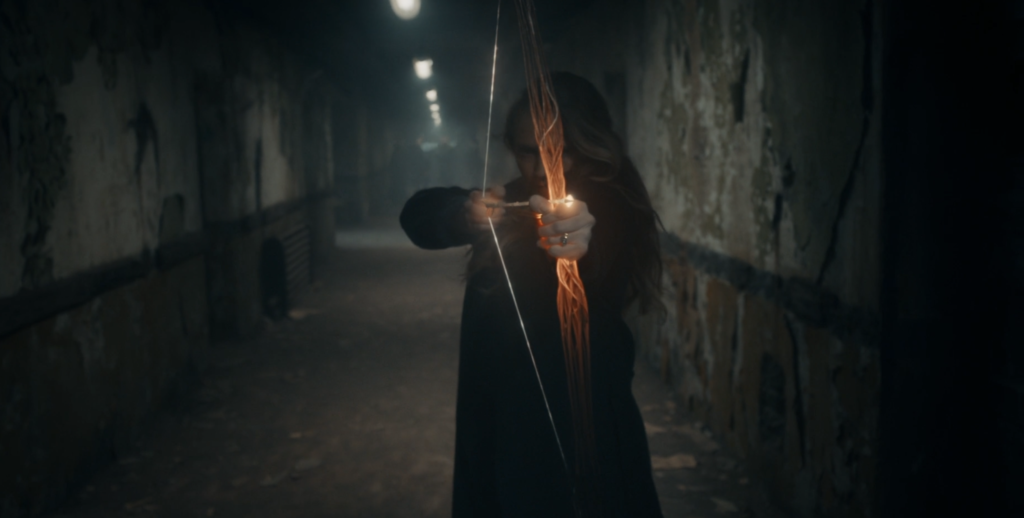 The adaptation for this whole series has been so much fun and I’ve really enjoyed the changes made to the story. It was really satisfying to have Sarah enact justice on Peter Knox and while in the books he was the main witch villain through the end, having Satu take on that role also was a good move. Having Diana so easily defeat both Benjamin and Satu really showed how she’s come into her own power and was no longer scared of her magic.

Toby Regbo really stood out for me this season in his portrayal of an older Jack. His performance really captured the torment of the character’s actions and his love for Diana and Matthew.

Domenico’s change at the end of this season was also a pleasant surprise as I was not expecting him to grow tired of Gerbert’s autocratic and power-hungry tactics. This proved to benefit him in the end as the other vampire was now totally out of clout within the Congregation.

All in all, what a treat to be able to see these characters come to life on screen. It was beautifully done from locations to costumes, coloring and editing, and everything else in between. Here’s hoping that an adaptation of Time’s Convert graces us in the future to see Marcus’ origins and his and Phoebe’s next chapter.