In this week’s episode of A Discovery of Witches, things get even more complicated as Matthew discovers a new branch of his family and the vampire murders hit very close to home.

Here are the most important moments: 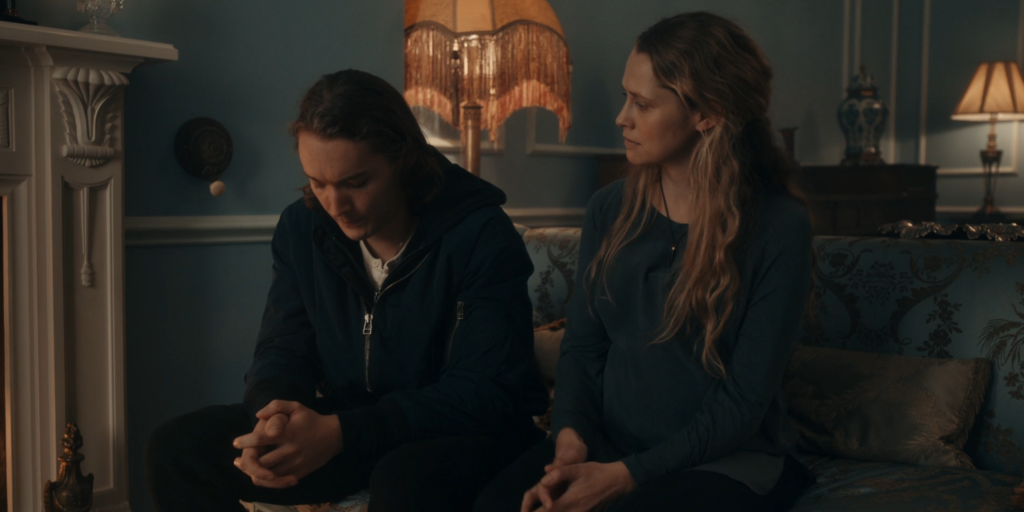 Jack Blackfriars is Back

When we last left Jack in season 2, he was still a young boy whom Matthew had left in the care of the Earl of Northumberland. Meanwhile, Diana given Father Andrew Hubbard a single drop of her blood as payment for the vampire to also look after her adopted son. In the present, the husband and wife are leaving the South Kensington lab when they are met by Hubbard in the underground parking lot.

The first detail I notice about the priest is that his hair looks fantastic compared his previous style last season. Gone are the whites and he’s got a whole mop of chocolate brown locks now which had me wondering if vampires dyed their hair. In any case, Hubbard tells the duo that he’s looking for them both to return something of theirs. Out comes a grown-up Jack (Toby Regbo) whom Diana instantly recognizes.

Back at the Mayfair townhouse, Jack and the priest both explain what had happened in the past. He had contracted fever and was about to die when Hubbard intervened and made him into a vampire. Matthew is thoroughly pissed because he views vampirism as a curse more than a blessing. Hubbard retorts back that Jack was a young man already when he made his choice and that he was their responsibility and then passed that responsibility to him. He adds in that the boy had gone to the docks every day for years hoping that his parents would be there or that anyone had heard news of them, eventually he was forced to reveal the truth.

Diana tells her son how sorry they are that they left him, but he says he knew that they time walked back to this period. Matthew is surprised that both Hubbard and Jack know this when his wife finally reveals her pack with the vampire priest before they time walked. After the crazy events of the evening, husband and wife are in their room when he expresses his anger in her arrangement. Diana counters that she used her magic to make certain that Hubbard only received one drop of blood and it only contained some of her secrets and none of his. She also says that Hubbard couldn’t let Jack die, could he? Matthew angrily answers that he chose death rather than live without his wife and son and she asks if he wishes he had. His expression softens and answers no because he wouldn’t have met her and now has the chance to be a (bio)dad again. She tells him that Jack has his second chance to be a family with them again.

Things get complicated though when Baldwin shows up to visit while Gallowglass and Jack are working on motorcycles. Jack’s got blood rage and it acts up when the head of the de Cleremonts gets all high and mighty. Baldwin takes him back to the townhouse and takes a savage neck bite to learn that this is the person responsible for all the recent murders. He comes to know Jack’s history with his brother and Diana from the past and so is livid that Matthew would protect him. The witch’s maternal instincts kick into full gear and she uses her power to wrap a steel chain around Baldwin’s neck demanding that she release her son immediately. As he does and she lets go of her own magic, he shows them images of Jack’s victims and tells Matthew that he knows what needs to be done. Diana asks her son if this is true and poor Jack is in agony as he is unable to answer her.

Matthew bends the knee and tells Baldwin that he had no knowledge of Jack’s blood rage, and his brother tells him that he must kill the man. Diana begs her husband not too and instinctively Jack flees. They head to Hubbard and the priest explains that the younger vampire begged him not to tell his parents. Matthew asks if Jack got his blood rage from him and the other man drops another bombshell, Benjamin Fuchs is his sire. Hence, Hubbard is Matthew’s grandson and Jack his great-grandson. We also discover the very horrific trauma that Benjamin inflicted on his grandson because he wanted to cultivate the blood rage in his system. Hubbard was only a carrier, but his maker wanted those with the disease to be a weapon against the de Cleremonts. Benjamin told Jack that he needed to prove he was Matthew’s son by killing and torturing humans. Hubbard tried to stop it, but he could not as he still had other lost souls in his flock to care for. He shares that Jack swore to him many times that he wouldn’t kill again though he understood it was like an addiction for the younger man.

At the townhouse, Matthew wrestles with what to do as he knows how much suffering Jack has already gone through. Diana wants him to bring her son home so that they can help him and protect him, but he asks what happens when the Congregation finds out that Jack is responsible for the murders? Either they will kill him, Baldwin will kill him, or worse Benjamin will do something worse, and no one will care how much pain they inflict on their son. He also adds that to save Jack, he must openly disobey the head of his family which is a war that they cannot win. Diana disagrees and says that a father protects his children when Matthew goes off in search of the missing vampire.

Upstairs, a very troubled Marcus confides in Phoebe that when one of their kind shows signs of blood rage they are killed by order of the Congregation. He also tells her that some time ago, his father was charged with killing his children and their children in New Orleans because he was a carrier. The culling was necessary to prevent exposing creatures to humans, but so little of his family survived.

Matthew finds Jack and the younger man shows his father the miniatures he killed a man for to obtain them. He also says that he didn’t know becoming a vampire would make him sick and because he was already dying, what difference would it make? When he couldn’t control himself, he didn’t want to live anymore but Philippe told him to wait for Matthew who would teach him how to control the blood rage. Jack admits that he didn’t know how evil he would become and that he won’t fight Matthew now, knowing his father has come to kill him. The older vampire however explains that he’s regretted a lot of actions his taken in his life, but Philippe was right that things do change. The two men return home together to the townhouse with a waiting Diana who is utterly relieved. Inside, Jack asks Fernando how he taught Matthew to control his nature and the other vampire explains that all he did was to teach pause and reflection. This disease did not have to be his destiny though it was a hard road ahead. Gallowglass adds that Jack has Diana in his corner, and she would do anything for him.

Once the younger vamp departs the room, Fernando tells his mate’s son not to let Matthew know about his feelings for Diana. Gallowglass says that Philippe charged him with keeping Diana safe and he’s done that for nearly his whole life. The witch is with Matthew now however and one day soon he may need to walk away from her. That day hasn’t come yet though.

In Venice, Gerbert asks Domenico to come on over and shows him an old scroll of the de Cleremont family tree. He asks if the other vampire sees anything wrong with it and then goes on to say that they have hid things they didn’t want known. Gerbert wonders if he can trust him when Domenico argues that he has revealed the blood raged vampire during their meeting. Suddenly, Benjamin enters the room and ominously announces that even the de Cleremonts secrets come out eventually. Domenico thought that Benjamin was dead and Gerbert is ready to take down his mortal enemies.

Matthew finally comes to the realization that to protect his loved ones, he needs to form a scion to take responsibility for everyone who’s inherited his blood rage. Marcus and Jack will go with him to New Orleans to convince Marcus’s children and grandchildren to pledge fealty to him.

However, before that he decides to take a leap of faith. Earlier in the episode, Chris and Miriam explain that they need more help in their research into creature genetics otherwise it will push the timeline back of finding a cure for blood rage even further. Matthew of course is against bringing on more humans into the project because that would mean they would have to expose themselves to the group which is risky. Now though, he has a change of heart and decides to move forward with this plan, revealing to a group of graduate students in Chris’s program that vampires, witches, and daemons exist, and they are there to study their DNA. These guys signed NDA’s rest assured.

As Matthew is at the airport with Marcus and Jack, Benjamin gives him a quick call and emails over an old video capturing Jack murdering two frightened humans at the urging of his grandfather. A seething Matthew asks what the other vampire wants and Benjamin replies that he wants a family reunion with Matthew, Jack, himself and Diana.