‘A Discovery of Witches’ Season 2 Episode 9 Review: You Don’t Mess with Corra

This week’s episode of A Discovery of Witches is filled with a lot of action and drama as Diana and Matthew contend with the fallout from their trip to Bohemia.

Here are the must-know moments:

Upon returning to London, Diana (Teresa Palmer) is still trying to read the damaged Ashmole 782. She hides the book beneath a loose floorboard in her bedroom and goes downstairs to see Matthew (Matthew Goode). Her husband is quite pensive as he must face the wrath of Queen Elizabeth (Barbara Marten) having failed to bring back Edward Kelly. She wants to go with him, but he insists in going alone as having her there would only make matters worse with a monarch whom clearly doesn’t like her. Diana relents though she thinks he is being overprotective. Matthew wants her to learn her magic quickly so that they can return to the present because they do not belong here.

He accompanies her to Goody Alsop’s (Sheila Hancock) where we discover that the elder weaver is not doing so well. Susannah tells the couple that a lot has happened since they left. Agnes Sampson was tortured and Scotland is a hotbed for witch persecution and its spreading south. Goody tells Diana that they are the last of the weavers now. Matthew volunteers to do what he can to quell the anxiety in their area, which surprises the elder witch. She says that his countenance has changed and the dark cloud above him has lifted somewhat. Goody then notices though that there’s something else that’s different and she puts her hands in front of Diana and scans down, stopping at her midsection. It’s the historian who then realizes that she’s pregnant. But how can this be?? Vampires should not be able to have children, hence they sire other vampires. The plot thickens!!

The two chat by the fire about their new situation with Matthew clearly freaking out at the impossibility of it while Diana is basking in her mom-to-be glow. As a trained medical professional and man of science, this goes against thousands of years of biology and so he’s understandably concerned at how dangerous this could be for his wife. The witch in the meantime asks about Jack and Matthew says that he’ll make sure their adopted child is well taken cared off. As much as he wants them to return to the present, Diana still needs to master the other magical knots. He reiterates that he will meet with the queen alone and buy her the time she needs. They then share a tender moment.

We Meet Corra at Last

Susannah goes to fetch the other witches so that Diana and continue her training. As the historian begins her training once more, she is able to tie the magical knots all the way up to number 7 when her familiar bursts forth from her chest. The other women look on in wonder at the firedrake who calls herself Corra. Firedrakes are a subspecies of dragons with an affinity for both fire and water elements. Goody tells Diana that Corra will come to her when the familiar is needed. 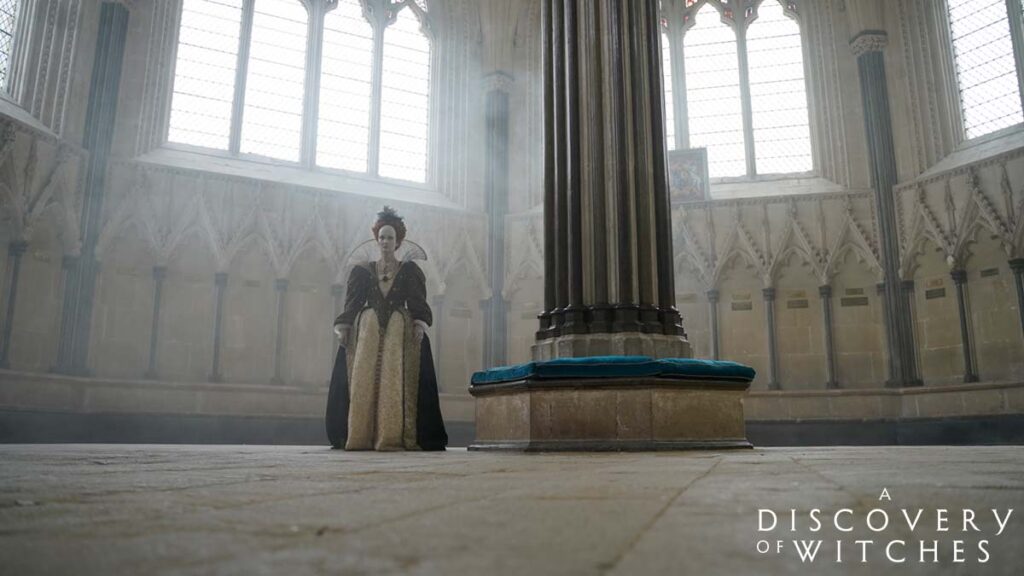 Matthew meets with Queen Elizabeth with a very righteous Lord Burghley. The monarch is super pissed that he left Kelly behind all for some book. Apparently an ambassador from Bohemia has also arrived and revealed that Matthew stole a book from Emperor Rudolf instead of bringing back Kelly. She instructs Burghley to search for the tome at Matthew’s home while he remains at court. Should he try to flee she will have him hunted down. The queen is especially agitated at this time because she has a horrible toothache.

Later on, he consults with the Earl of Northumberland who is worried about the vampire’s situation. He suggests bringing in Mary Sidney to soothe the queen’s ear, but Matthew says he’s going to try telling her majesty the truth. So Matthew goes to her and offers a drop of his blood to ease her pain. As she accepts it, there’s a euphoric look on her face and in the aftermath tells him that his blood could make her immortal. The vampire says that would break the line of succession. Putting a creature on the throne would lead to chaos though Elizabeth is convinced her death would achieve the same outcome. This is something apparently Matthew had previously told her father. He adds that she should not to be concerned about a Spanish invasion or the witches, revealing that he has seen what’s to come. Diana is a time spinner and they arrived here from centuries into the future. Matthew assures her that 500 years forward every man, woman, and child will know her name Queen Elizabeth I, gloriana, the greatest monarch in English history. With this knowledge she forgives him.

Meanwhile though Lord Burghley has ransacked Matthew and Diana’s home, confiscating every book in the house including Ashmole 782 that he discovered beneath the loose floorboard. While Pierre and Francoise try to protest, they are told to stand down under the order of the queen. Before leaving the area they are stopped by Gallowglass for a moment but is given a sign by Pierre to let the men go. Luckily though, Jack’s street skills came in handy as he took Ashmole 782 back from Lord Burghley’s chest without anyone noticing. When the spymaster returns to his queen on his successful mission the royal doesn’t care anymore because she’s forgiven Matthew.

Diana Has a Khaleesi Moment

As Diana is heading back home, she is stopped by Kit (Tom Hughes) who tells her that Matthew has been taken by the queen’s guards. Earlier, he finds the vampire who was on his way to court to ask if he’s finally gotten rid of the witch. Matthew of course angrily tells the daemon that as long as he and Diana are alive, they will never be parted. So Kit is looking pretty sketch right now as he urges the weaver to get on a boat to an unknown destination. Diana is hesitant naturally but decides to follow him worried about her husband’s safety.

She is taken to a cave of sorts where Louisa is waiting. Kit thinks they are going to get Diana on a larger ship to exile her while the vampire laughs saying they are going to kill the witch naturally. Diana is chained up with Louisa (Elaine Cassidy) taking a pistol out intending to shoot her when Matthew’s sister hands it over to the daemon. The historian tries pleads for them not to do this when she starts reciting one of Kit’s famous poems, From Hero to Leander.

It lies not in our power to love or hate,

For will in us is overruled by fate.

When two are stripped, long ere the course begin,

We wish that one should lose, the other win;

And one especially do we affect

The reason no man knows; let it suffice

What we behold is censured by our eyes.

Where both deliberate, the love is slight:

Who ever loved, that loved not at first sight?

This catches him off guard as he’s never spoken the words to anyone. Diana offers to tell him his future and he says please. Suddenly Louisa knocks Kit out cold and says he is weak, but she isn’t. However, she isn’t a very good shot apparently because she misses. Kit comes too and tells the vampire not to kill Diana and luckily the witch calls on Corra for help. The firedrake emerges just as Louisa takes the shot right in the middle of Diana’s chest. The magical being seems to protect her and stops the duo from leaving. The historian then tells them that they have no future because soon they will die and their deaths will not be gentle. She casts a ring of fire around them when Matthew arrives with Gallowglass (Steven Cree) and Father Hubbard (Paul Rhys).

The priests asks her not to kill them as they are tortured souls and living is punishment enough. Diana extinguishes the fire and Matthew tells Gallowglass and Father Hubbard to take Kit and Louisa to Bedlam. Kit is still calling out to his vampire love as he is being dragged away.

Matthew and Diana Take Their Relationship to the Next Level

Later on, Diana demands that Gallowglass take her to Bedlam or she’ll find it by herself. Reluctantly he does and they find Matthew there with the blood rage on full display. He looks about ready to kill his sister who taunts him to do the deed. But Diana is able to bring him back from the brink as he drops Louisa to the floor. She then holds his hand and they leave this awful place. Important to note too that Kit and Louisa are housed in a room full of other people, isn’t that awfully public to be acting all vampire like?

Back at the house, they pause for a moment to see a sleeping Jack and once they are in the privacy of their room, Matthew admits that every day of his life is a battle with himself for control. He has a need to possess her in ways that no warm blood could possibly fathom. The blood rage can be all consuming and all he’s wanted to his cleanse himself of it. Instead of being freaked out though, Diana offers herself to him without reservation. He says that drinking from the heart vein of a mate will be so that nothing is hidden and all that is left is complete belonging and honesty. She bids him to drink then though Matthew says that he’ll know her secrets, but she won’t know his. Diana has a solution in the witch’s kiss which allows her to see inside his soul. She asks him to drink from her first and after she kisses his forehead. A magical current then connects his mind to her heart. When he asks what she found Diana responds, “You.” 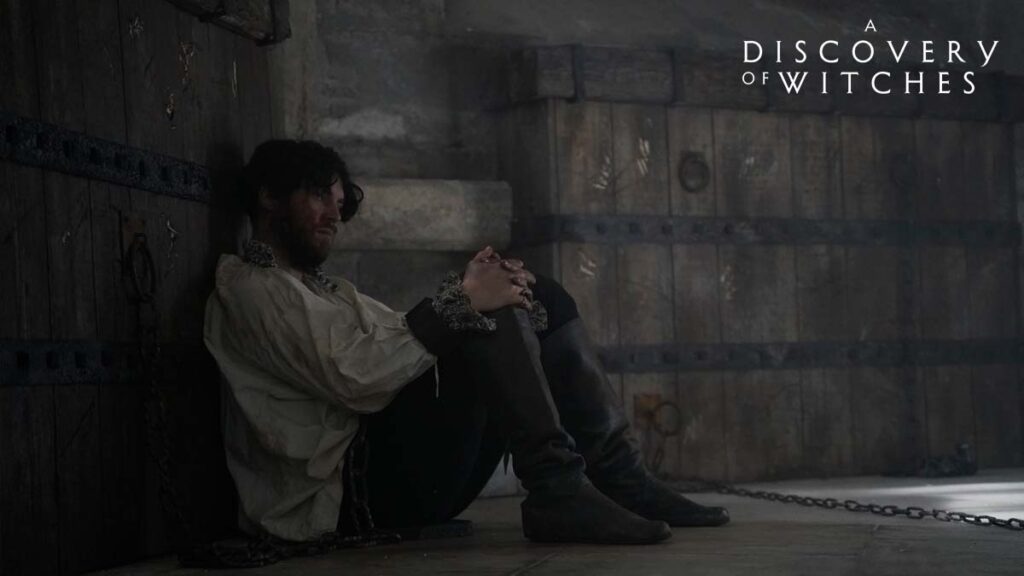 A Discovery of Witches streams on AMC+, Sundance Now, and Shudder.