Spoilers through season 3, episode 7 of 12 Monkeys

It’s the second night of the 12 Monkeys binge weekend event extravaganza as the intrigue and mystery continue for our group of time travelers and their enemies. These three episodes finally gave us a real look into the life of The Witness as a young boy and the struggle that Cassie and Cole endure when their roles as parents and would-be saviors of the world collide.

Here are the memorable moments you need to know from episodes 5, 6, and 7. 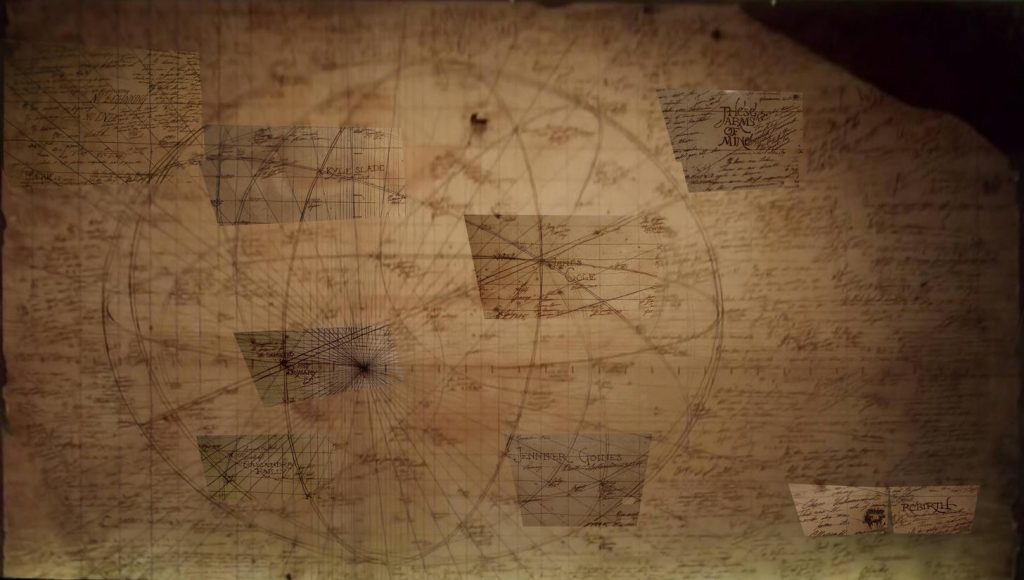 The Word of The Witness

Team Splinter travels back to the 1980s to steal the word of The Witness from an auction house. Jennifer comes up with a brilliant plan to steal the timeline map of The Witness without alerting the 12 Monkeys. She discovers from Olivia (in an Oceans 11 like sequence) that during WWII the Monkeys hid the document inside the frame a painting called Constance to smuggle it out of Germany without attracting attention. However, the artwork gets stolen and is lost to the group for many years. Olivia ended up purchasing it at an auction house in New York in the ‘80s. The plan is that Team Splinter needs to borrow it, make a copy, and return it before 80s Olivia buys it that way the Monkeys is not alerted of their plans and they’ll finally have an edge. Jennifer poses as her mother to get them inside the auction house though the situation goes downhill from there. Cole and Cassie end up needing to sneak into the place at night in order to catch the painting before it went on sale the following morning. Jennifer and Deacon serve as a distraction but 80s Olivia herself shows up. The stressed primary begins to bid on everything, calling attention to herself and also draws her father and young Jennifer to the scene. However, she ends up saving the day by getting her hands on the map and makes photocopies before they are retrieved back to 2046. She even protects Cole and Cassie’s secret by “accidentally” copying her handprint on the section that talks about the house of cedar and pine. 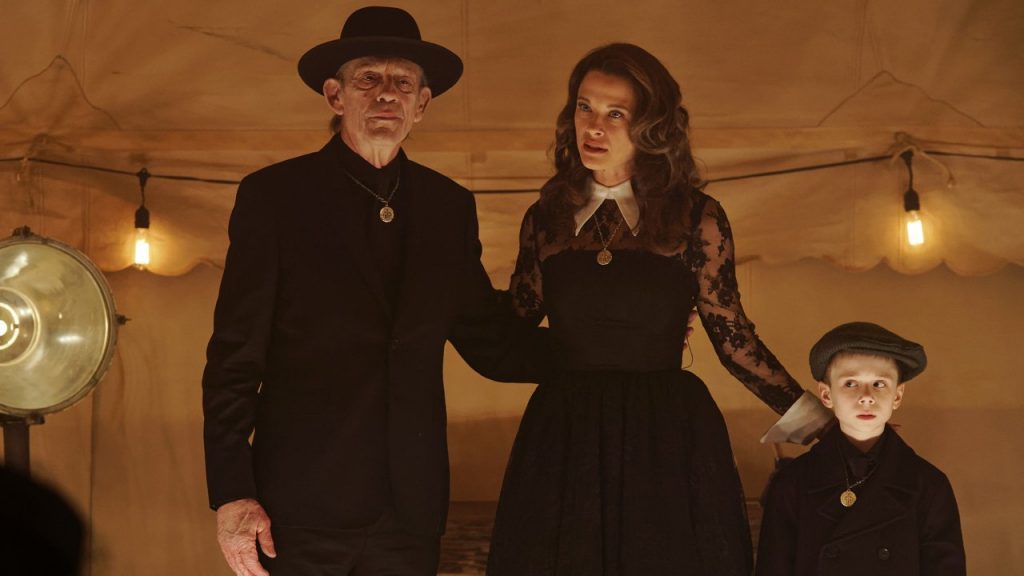 First Gathering of the Faithful

Using the word of The Witness photocopies, Cole and Cassie head to 1953 and seek the help of FBI agent Robert Gale again (we last saw him in season 2 where he helped Cassie, Cole, and Ramse but died in the process). They enlist his assistance in finding the first gathering of the faithful in Hope Valley, an event listed on the document. Gale figures out that there has to be a main salesman for the Monkeys so to speak that is recruiting people who have suffered loss through a string of disasters plaguing towns nearby. This mysterious figure that pops up during a sudden mining explosion turns out to be Christopher Lloyd! Setting herself up as bait, Cassie plays a grieving widow in a cemetery and channels the pain of losing her son and disconnecting from Cole as a way to convince PM and his father to give her an invitation. At first she goes in alone with Cole and Gale waiting for her in the car outside, but the FBI agent ends up knocking another attendee out and giving the time traveller the invitation instead. Within the tent we see the return of Scottie Thompson as the female messenger, she is the wife of the salesman and mother to the young Pallid Man. 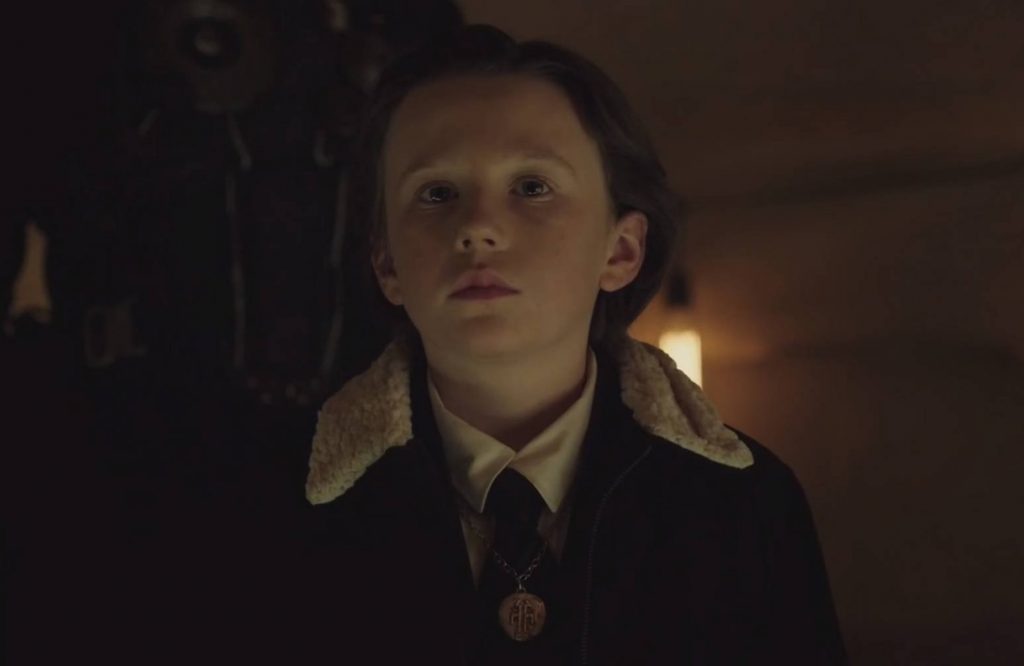 First Look: The Witness as a Young Boy

Magdalena arrives with a young boy whom is introduced as The Witness. He seems to be about the same age as PM at this point. Cassie and Cole’s son begins to sketch and we discover that he is also primary, which is a no-brainer to lead a time travel organization like the Monkeys. He picks one woman from the attendees to be the 12th and then she is splintered away by one of the horsemen. The rest of the audience though isn’t so lucky. The Witness wears a gas mask and releases a gas bomb meant to kill all everyone at the gathering as he thanks them for their sacrifice. Magdalena, Sebastian, and The Witness splinter away. 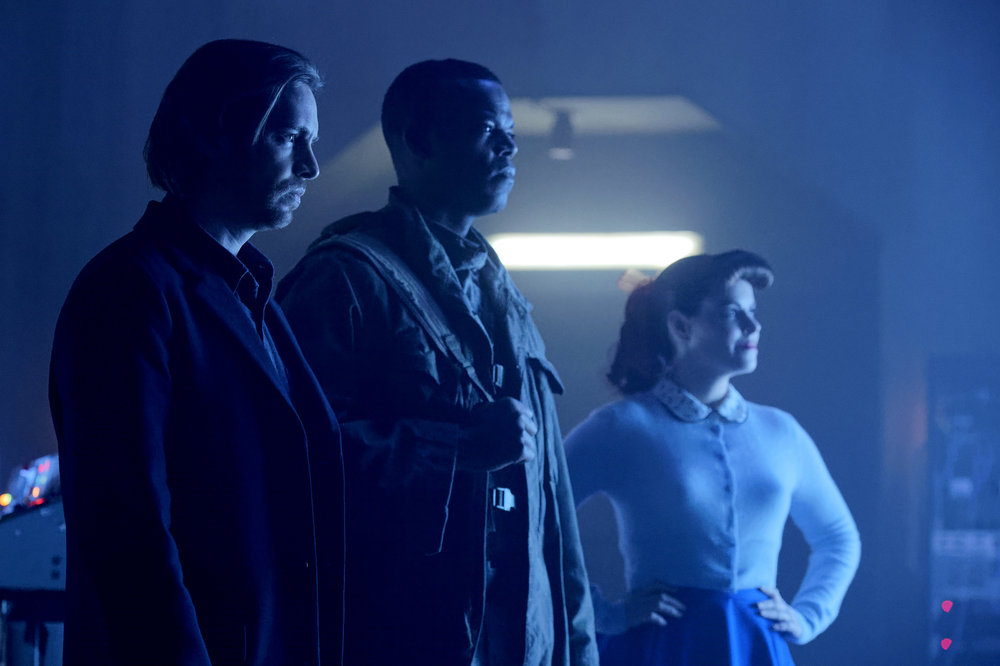 Still in the tent, the last horseman notices Cassie and Cole and tries to attack them but they are able to kill the man first. They use his vest to escape and it takes them to where/when The Witness is being kept by his guardians. The duo then splinters back to 2046 to regroup and Jones is able to study the vest.

In 2046, a plan is formulated where Jennifer, Cole, Deacon, Hannah, and Whitley will go back to the location where The Witness is located to kill him. But first they need to go Raritan National Laboratory to steal an EMP like device that will temporarily prevent the splinter vests from working. Jennifer and Cole get the device while Whitley and Deacon work on their get away car. Hannah in the meantime is at casa de Witness as a lookout. Once Team Splinter is together, they activate the device and enter guns blazing. 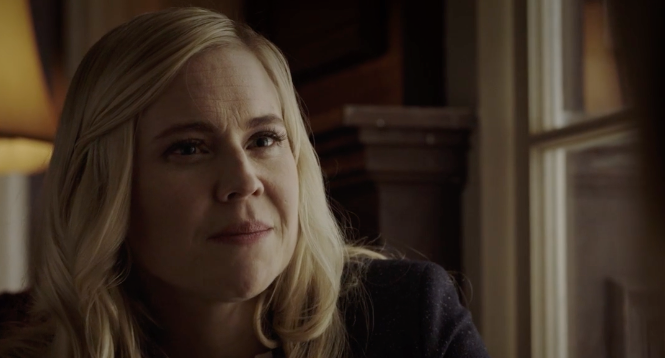 Meanwhile Cassie convinces Jones to let her visit her own mother because of the conflicting feelings she’s been having knowing her son is about to be killed (though she doesn’t tell the scientist that). Dr. Railly is able to talk to her mom who is a prominent psychologist, in the guise of seeking her professional opinion on a document (the word of The Witness). Her mother says that it’s actually a very beautiful piece work and that it’s about a man expressing pain, love, anger and hope. The other Dr. Railly also says that it’s a story of what he hopes to be. Cassie convinces her mother to take her young daughter to the museum, and before she splinters back to the future her nose bleeds, signifying that something has changed in her timeline. However when she arrives back, Jones is furious after discovering the truth. Cassie is forced to grab the splinter vest and goes to save her boy. 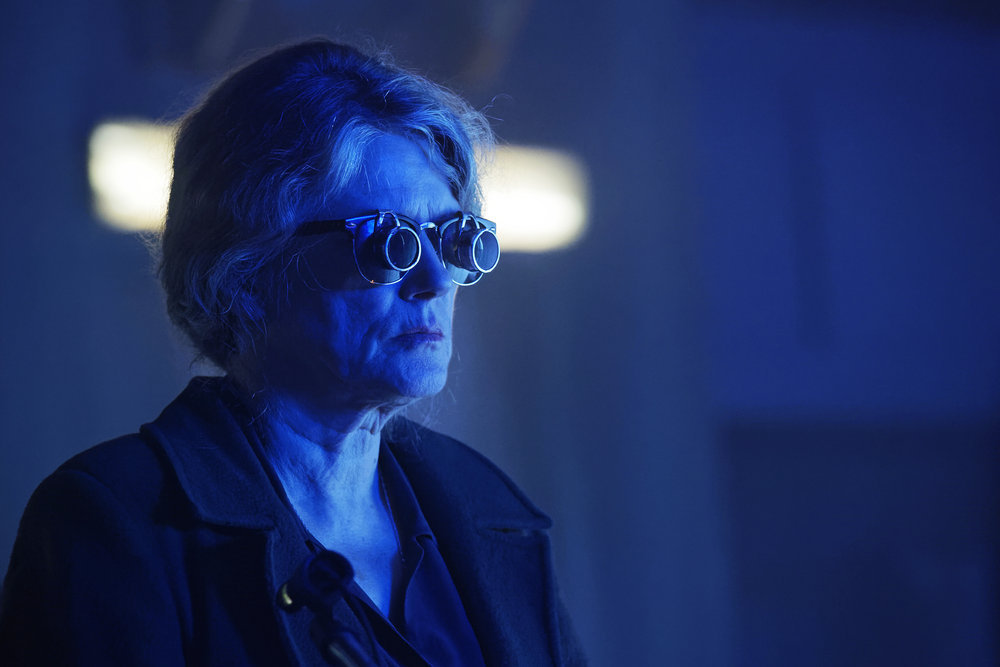 Before Team Splinter (sans Cassie) left, Deacon told Jones that he felt that C and C were hiding something and so she herself goes to investigate. Traveling to 2007, the scientist discovers what really happened between Cole and Ramse. She ends up learning about the origins of The Witness as the two men argue in front of the community center in New Jersey. 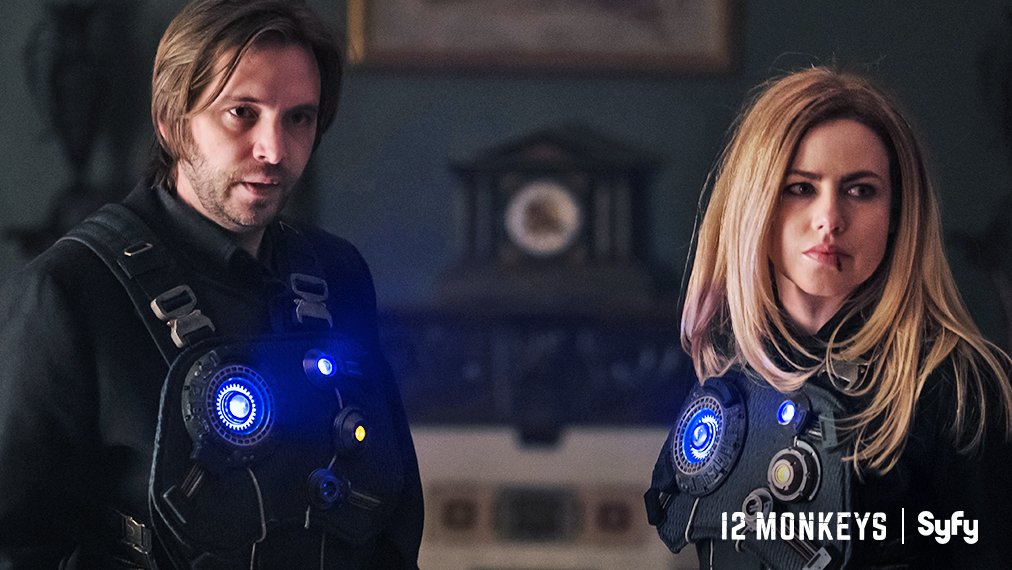 At casa de Witness, it’s a bloodbath as Team Splinter killed most of the inhabitants of the house. Jennifer is the first one to come upon the young boy with Sebastian (one of the horsemen) and she lets them go. Jennifer and The Witness have a conversation out of time where she says that he’s better than her and he says that she’s going to be the best out of all of them. Cole finally comes upon his son and his guardian and he shoots the horseman in the leg and shoulder even as the other man protests that his kid doesn’t want to do the things he has been foretold to do (he had also been hiding drawings of Cole pointing a gun that The Witness drew from Magdalena). Eventually Cole is unable to kill his kid because he stares into his eyes.

Cassie arrives and is blocked by Magdalena from entering the house. They fight and the doctor is able to trigger the self-destruct mechanism on the vest, bye bye Maggie! Meanwhile Deacon enters the room and Cole comes in between him and his kid. Just as the ScavKing is about to fire, Cassie shoots him from behind and then Sebastian splinters himself and The Witness away. However before they depart, Cassie able to tell her son that his name is Athan.

Cole gives Jennifer his injection to send an injured Hannah back to 2046. Cassie and him take the splinter vests from the dead horsemen and go rogue to save their son from Team Splinter and the Monkeys.

Back at the facility, Deacon and Jones team up with a new common goal, to kill Cole, Cassie, and their son.

It’s amazing how alliances can quickly shift as Cole and Cassie’s roles as parents makes finding a way to save their son their main priority even as they know what he may grow up to become. Dr. Railly’s trip to see her mother (Kathryn Railly – who incidentally is a psychologist and the same name of the originally Railly in the 12 Monkeys film) and how the other woman said that you never give up on family solidified her resolve to save her child no matter what is something that Jones should understand since she had been fighting that fight herself since the beginning.

Speaking of Jones, her teaming up with Deacon after their shared feelings of betrayal is interesting because her ruthless side is coming out even more so. Deacon’s been struggling with finding a place in the story but after his conversation with Olivia it seems that he’s accepted that he’s a killer. He ends up shooting innocent people at casa de Witness even after they’ve given up, telling Jennifer that he’s not a good guy.

In episodes 6 and 7 we finally also got to see the life of the young boy who is to grow up as the prophet of the 12 Monkeys. He shows defiance against Magdalena and doesn’t want to do the things he is supposed to do, such as kill all those people at the first gathering of the faithful. We also see that not all the horsemen are like Magdalena as Sebastian truly seeks to protect the boy from harm. He hides the drawing The Witness makes of Cole with a gun from his superior in order to keep him safe knowing that the other guardian would do something terrible. When the father finally stares into his son’s eyes he doesn’t see evil there but a scared child and he is unable to shoot the boy. The whole idea of nature vs. nurture seems to have nurture winning as the Witness wasn’t born evil and through having kind teacher like Sebastian, he hasn’t yet turned out to be fanatical leader of the 12 Monkeys.

Tomorrow is the final night of season 3 and it’s certainly going to get even crazier with Cole and Cassie going rogue and friends now become enemies. Who will survive to the end? We’ll find out soon enough!