’12 Monkeys’ Review: Fate Can Suck It

We’ve made it to the season finale of “12 Monkeys” and it’s been one crazy ride full of unexpected twists and turns. It all culminates to a Cole and Ramse showdown, potentially changing the course of both their fates.

While throughout the series Cassie has been set up as our heroine who makes the moral choices, in this episode we finally see her dark side. Early in “Arms of Mine,” Cole is beating the crap out of Aaron for information on the Army of the 12 Monkeys when the virologist enters the room and condones the torture. They find out though that Aaron doesn’t know much, only that they (Cassie and him sans Cole) can weather out the plague because there was no way to stop it. He didn’t know who Ramse was, only that the woman (Olivia) was his contact and that they were preparing for the coming of the twelve. He tells them of the facility in Colorado and that the woman was one of Markridge’s key investors.

Just as Cassie and Cole are discussing their next move, Aaron breaks free and makes a run for it. The two men grapple and fight in a room filled with various industrial solvents. Aaron uses makeshift torch and Cole’s jacket catches on fire. The two continue their tussle but Aaron gets trapped underneath a shelf as the whole room is engulfed in flames. Cassie runs in and tries to help her ex-boyfriend but Cole stops her, saying that they had to get out of there. The two leave a screaming Aaron, but I’m sure this won’t be the last we’ll see of him.

Cassie pushes her grief down and gets to their next task, figuring out a way to get into Markridge to find out about Olivia. It’s easier for her this way of course because Aaron wasn’t all bad, he just made poor choices after realizing that he was loosing his lady love to Cole and the mission to save humanity. After some Internet searching, Cassie pulls up an article showing Jennifer as Markridge’s new CEO. The two head to a private Markridge stockholders event hoping to see Ms. Goines privately.

They manage to get Jennifer alone in a room and the former mental patient is none too happy to see Cassie, her infatuation with Cole still going strong. In a completely uncharacteristic move, Dr. Railly slaps the new Markridge chief and tells the other woman that she doesn’t have time for her crap. Jennifer sobers up and tells them about Ethan Seki, a genius venture capitalist and none other than Ramse. She goes on to say that he’s been obsessed with a government project in the Raritan Valley National Laboratory. This of course is the future location of Project Splinter. Once the duo leave, Jennifer is on the phone with presumably Olivia, letting her know that it’s done. 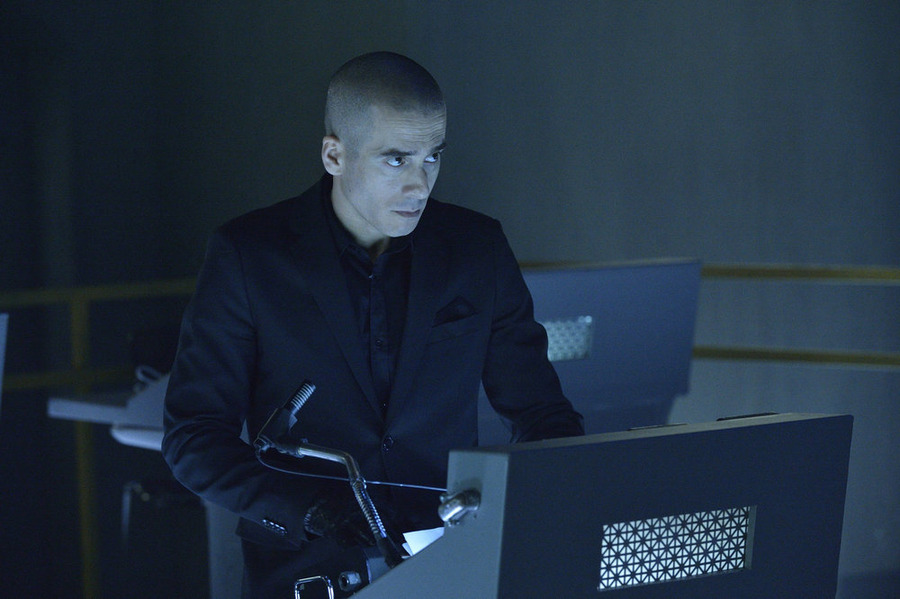 We shift gears and find out what Ramse’s other goal had been all these years. He funded research at Raritan so that he could one day use the machine himself and go back to the future and be with his son. A goon accompanies Ramse to the lab and there he meets the project’s director and Katarina’s ex-husband, Dr. Elliot Jones. Turns out that he was the one sending vines to the future as a means of testing out the time machine! Well that is one mystery solved. Ramse has arranged to be get some private time with the device in order to send himself back to his original time.

Cassie and Cole get into Raritan through the exhaust tunnels and separate. Cassie ends up going into a room filled with the red vines and she begins to hear Olivia’s hypnotic voice again, telling her that she’s walking through a red forest. This is definitely strange though because the vines that Elliot was sending to the future was green, so where did these red ones come from?

Cole manages to get to the machine room as Ramse is making final calibrations. The other man is completely surprised to see his ex-best friend alive. Ramse explains that he’s here to return to the future and Cole is still aghast that he would kill billions of people to save just one person. Ramse begs to differ, saying that Cole was coming back to the past was to save Cassie. Touche. This has been a recurring theme throughout the entire season and it’s been great television to see how each character has acted when faced with this decision. 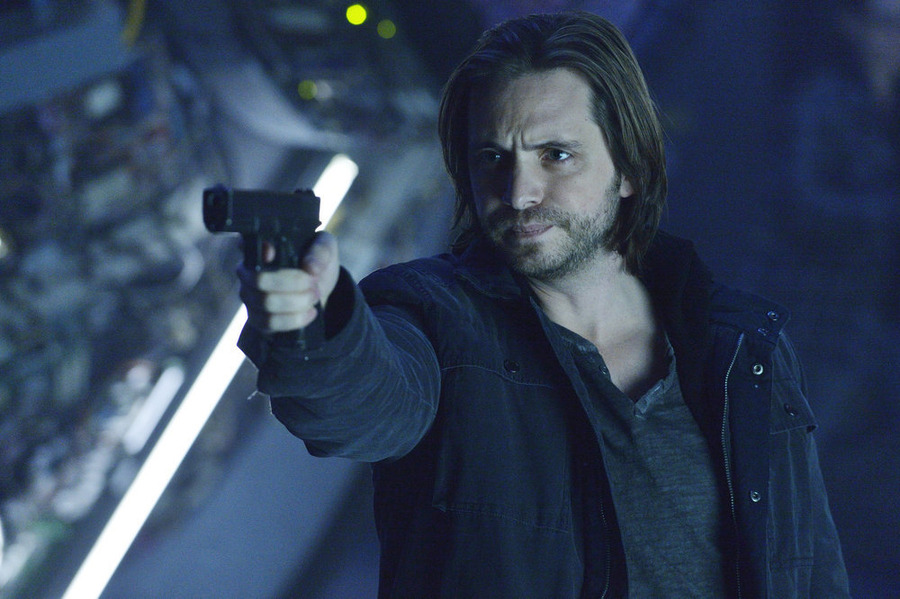 Dr. Railly appears then and we have a Mexican standoff with the goon pointing his gun at Cassie, Cole’s hovering between Ramse and the goon, and Cassie’s dead set on Ramse. This has to be my favorite scene in the episode because Cassie confronts Ramse about killing billions of people while Cole is actually defending his ex-bff, not wanting her to shoot him. He’s caught in a weird situation where he understands the other man’s motivation but obviously still cares for him. In an unexpected move, Cassie’s expression changes as she says, “He’s made his choice,” and then pulls the trigger. She then gets shot by the goon and whom Cole shoots after. What a mess!

Ramse tells Cole to send Cassie to Jones, knowing full well that if he still went the physicist wouldn’t help him anyways. Oh Ramse, my heart goes out to you for sacrificing seeing your kid to help a former friend out. We see a glimmer of how things used to be between the two men and not gonna lie it’s kind of awesome. Cole injects Cassie with the serum and soon she disappears into the future.

We change scenes to Olivia who’s at the 12 Monkey’s secret lair. Here we finally meet “the 12” and they turn out to be 12 healthy babies. Olivia wears the expression of a joyful mother as she gazes on them, which in this situation only lends to her creepiness. Of course she has more cryptic things to say like, “At last the new cycle has begun.” The other man with her comments that in 28 years they’ll be ready, which makes us believe that they could be the hooded brotherhood in 2043. Then she goes on to explains that The Witness had forseen this. Uhhhhhh WHAT?!?!?! Great, that means Ramse is not The Witness after all. Not cool guys, not cool. While Olivia is waxing on about how history will find Ethan Seki dead at the accelerator he helped financed and that his cycle has ended, bless Cole for having other plans. We see him coming back in and taking Ramse with him. 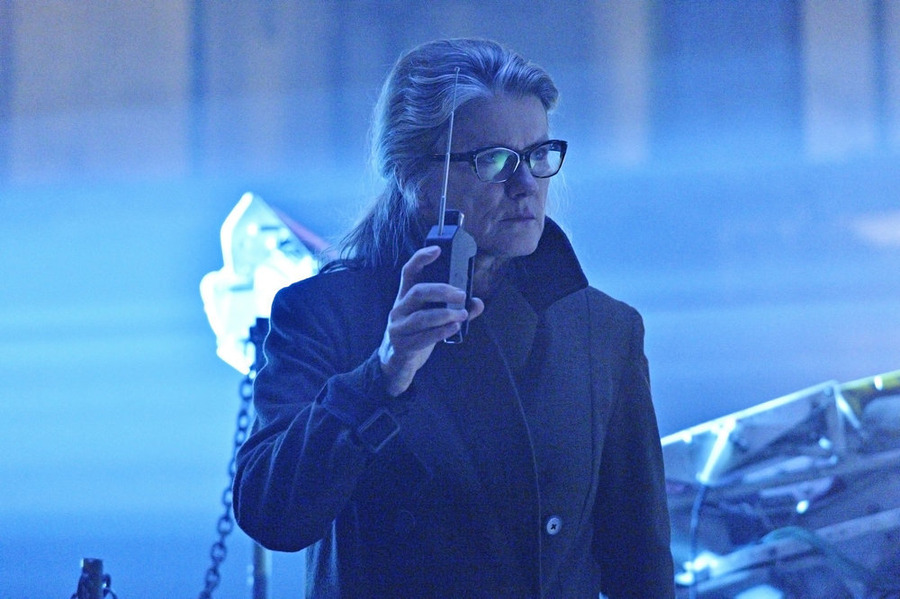 Jumping to 2043, the vines keep appearing on the accelerator chair and it continues to baffle Jones. She doesn’t believe that it’s an anomaly and there has to be some reason why it keeps appearing. Whitley is back as well asks her why they are still there if the mission is truly over. Jones though finds it difficult to just abandon her life’s work. Outside the facility, Deacon is with the new group plotting their assault. They get help form one of the former Spearhead scientists who wants Jones to pay for what she did. The invaders use dozens of bats attracted to the vibration of Project Splinter’s core and the animals end up being smashed into the cooling vents, overheating the machine. It shuts down all the power and Deacon and the others enter via the same exhaust tunnels that Cassie and Cole went through in 2015.

Inside Raritan, Jones takes out a set of explosives and attaches it to the machine. When Deacon and the hooded brotherhood enter the accelerator room, the German doctor tells them that she’s ready to blow the machine up unless they let the others go peacefully. Their leader agrees and as Whitley leaves, Jones hands over the bomb trigger. As Deacon is escorting her to a cell, Cassie materializes and shocks the bejeebus out of everyone. 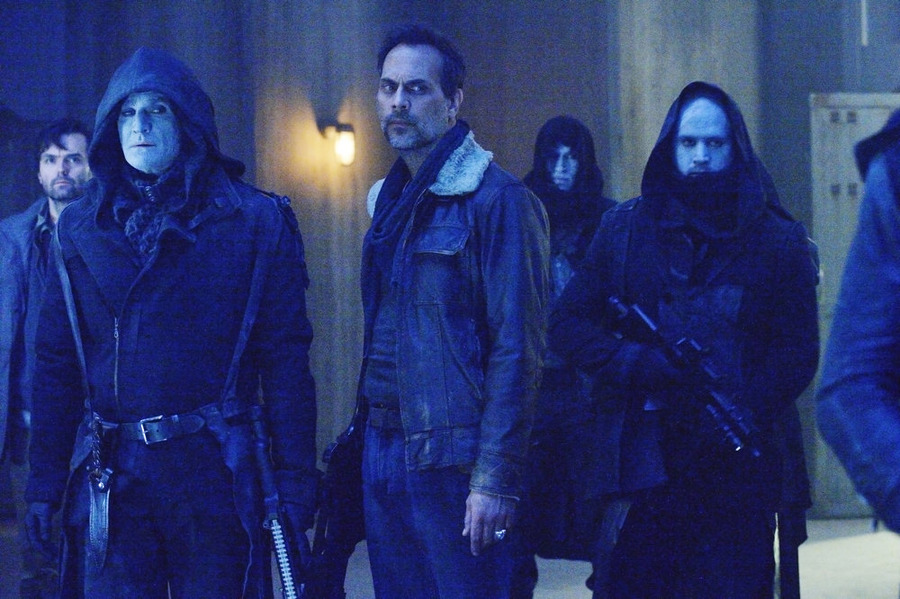 But what would a season finale be without a tantalizing cliffhanger? And for that we get the last scene showing Jennifer inside a private plane while cargo is being loaded and Olivia’s voice over saying that the release of the virus is out of their hands, exactly as it should be. Ms. Goines is traveling around the world for the next six months to finish some “work.” Has Olivia convinced her that releasing the virus is meant to undo all the damage that her father (and other men) have done to the world? In the end is she truly responsible for starting the plague? Ahh!! We’ll have to wait until next season to find out.

It has been an absolute treat to be shocked week after week by the characters and storyline of “12 Monkeys.” Just when you think you know what’s going on, another element is introduced and you’re left brooding on new questions and wondering where exactly is everything headed next? It’s the uncertainty that keeps fans hooked and a great accomplishment for the whole team behind “12 Monkeys” to have achieved that because addictive TV shows happen so rarely. The show has certainly surpassed my expectations and has delivered a sci-fi mystery that explores various tropes in a fresh way.

So thanks Syfy for renewing the series for a season two, you made the right choice. Till then we’ll be coming up with our own conspiracy theories on whether or not Aaron, Ramse, or Cassie survive, what exactly the 12 newborns are going to do, who the real Witness is, whether Jennifer is really going to release the virus, why Ramse, Pallid Man, and Olivia don’t age, and most importantly if Cole and Ramse make up. Phew.

Best lines of the episode:

Aaron: You destroyed everything in my life. You’re no savior Cole, you’re just a savage.

Cole: You wanna know what makes a savage? Seeing shit that no kid should ever see and then doing the same thing to survive. I was just a boy watching the world die alone. Now I know who I have to thank for that.

Cole: They love her.

Cassie: Looks like she finally got the dosage right on those meds.

Ramse: Without me coming here it would never have happened. Jones didn’t even want me there in 2043 and it was mine. Easy. It took time travel to create time travel. That’s how it works. There are no straight lines.

@theworkprint
Follow
Previous articleSPOILERS: ‘Dig’ Star Alison Sudol Gets to the Bottom of That Major Reveal
Next articleDaredevil – Who Was Stick Talking To at the End of Episode 7?