Spaceship Earth is a great documentary that explores the potential of human curiosity and ethic, while also positing the dangers that can arise from big-thinking projects.

The amount of human potential that exists is innumerable.  To say that one can accomplish something may be a statement that we take for granted, but when mixed with the right resources, determination, and just the right amount of creativity, one can reach for the stars…kind of.

This is heavily exemplified in my recent episode of Movie Talk, where my buddies and I discuss the latest big documentary to be released, Spaceship Earth, which just dropped on Hulu. This is a testament to what big thinking humans can achieve with a common mission to positively impact the world.

The story begins with an introduction to a group of intellectual futurists, with funny nicknames such as Johnny Dolphin, Freddy, and Horse Shit, who banded together to create probably one of the most underrated achievements to occur within the recent history of the United States.

The documentary follows the journey of ecologist and adventurer John Polk Allen, who led artists, architects, medical doctors, scientists, and other types of academics in several projects that focused on tackling environmental issues from a globalist perspective.

To do so, Allen and his group of self-titled “Synergists,” utilized methodical steps to create specific projects, such as building a boat from scratch to traveling the world, opening the Synergia ranch, and lecturing on environmental sciences.

However, it was their overall goal that brought them to a whole new level of human potential that ended up being one of the most impressive architectural – and possibly scientific feats in the twentieth century –  an independently large biosphere with seven ecological biomes – an environment with distinct plants and animals – within it.

The documentary goes in-depth on how the Synergists, led by Allen and his partner Marie Harding, created and facilitated the Biosphere 2 project with the financial backing of philanthropic billionaire Ed Bass. The process was an absolute feat in human cooperation outside of government or institutional interference.

Having inspired the movie Biodome, the Biosphere 2 project had eight inhabitants, or “biospherians,” from different research interests stay locked inside the biosphere for two years straight. The film shows the types of research and challenges that the uniformed crew incurred throughout their stay, involving high stakes life and death situations and a weird twist involving a notorious White House Strategist under the Trump Administration.

In this article, I am going to explore three themes which the documentary presents. 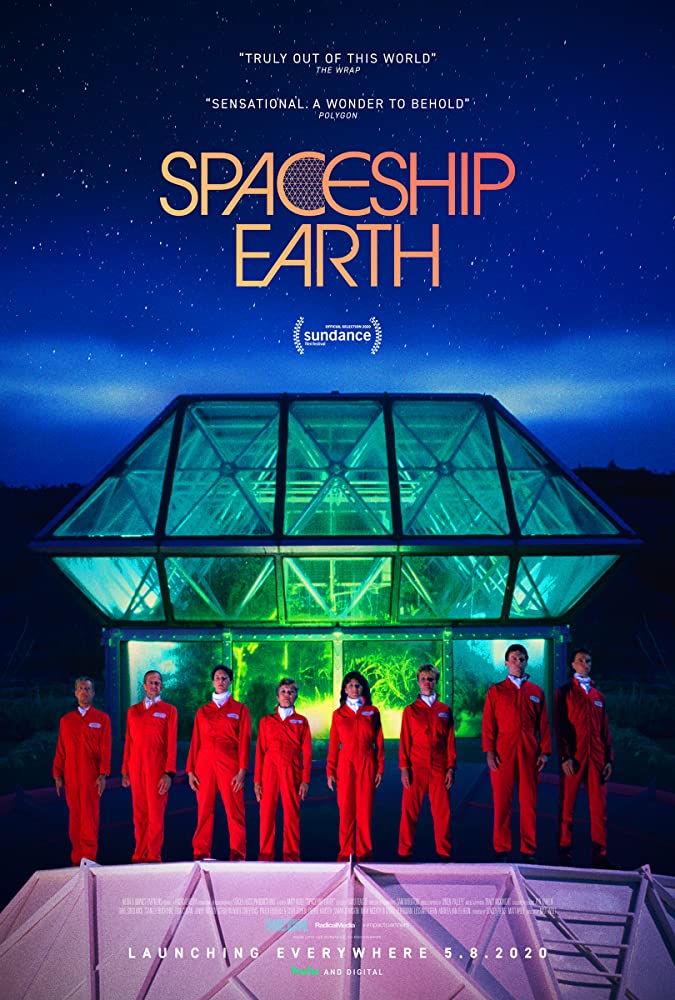 Collectivism has a lot more meaningful impact than individualism

Documentarian Matt Wolf had no difficulty demonstrating the amount of collectivism that existed within the Synergists, as each person involved was dedicated and determined in achieving an independently functional biosphere that would be the basis of researching biospheres for the development of planetary colonization and space travel.

One of Allen’s appeal as a leader, aside from his group’s mission, is that he welcomed many people from different academic and entrepreneurial backgrounds to achieve constructing different goals.

Each step that they took as a group was very methodical, showing how a largely democratically-run group was able to achieve architectural and technical feats that would be difficult for ordinary people. For example, one of the activities was constructing a full-on research vessel– named the Heraclitus – without outside help.  Each member took on different leadership roles and tasks that helped take the boat on many voyages around the globe.

Their shared collectivism also allowed them to buy and take care of a ranch – for habitation and also for research habitation purposes – while constructing a geodesic dome on their property that is still in use today.

What is really fascinating about their collectivism is that they took a very pragmatic approach in their scientifically-focused mission. Taking a different approach to many communes in the 1960s and 1970s, they used a self-described “capitalistic” method by incorporating themselves into companies, such as the Institute of Ecotechnics, and invested in business around the world, such as art galleries and farms.

The most fascinating aspect of the collectivism is the inclusion of arts within their processes, laying a foundational ideology that would last with them throughout their journey.

Combination of Arts and Theater with Scientific Research

Prior to taking on their large projects, Allen and his Synergists included theatrical arts within their group activities, even forming an artistic collective company called The Theatre of Dreams.

The documentary shows great footage of them practicing many theatrical exercises, as well as excerpts from a stage show that they performed on discussing all the dangers that could go wrong with the construction and projection of the Biosphere 2 project.

What is really important is that the combination of arts and sciences is two-fold. First, the inclusion of theater specifically reinforces the idea that they are all actors of a much larger piece and that each individual has an important role to play within that project.

Second, they were able to include these exercises and this type of thinking all the way throughout the Biosphere 2 project, literally spanning over a couple of decades.  Big thinking was their drive to tackling big problems – specifically environmental sustainability – and the arts and creative thinking are necessary when wanting to accomplish a grand feat.

The genius of Allen and the Synergists was very much entrenched in their numbers. By working with many people from different backgrounds, they were able to accomplish a lot within a lifetime. Simultaneously, many different opinions, motivations, and perspectives contributed to that process.

Matt Wolf subtly examines the role of communication and transparency within the Biosphere 2 project, especially from different perspectives.  For example, the documentary goes in-depth into the daily lives of the eight biospherians and how they communicated with each other and the outside world, in both positive and negative situations.

Spaceship Earth also examines the eventual disastrous relationship between John Allen and billionaire Ed Bass. Bass has an avid interest in ecological research and funded the Biosphere 2 project, which became very contradictory due to the differing motivations between the Synergists and Bass’ camps – as well as the negative effects that resulted in it.

The most fascinating look at communication within Spaceship Earth; however, is the lack of transparency the Synergists had when disaster struck within the project.

Marketed as an independently functioning biosphere, there were two instances of danger that occurred within their two-year stay that required outside help – one due to an injury and another due to extremely high carbon emissions.

These two instances brought a lot of negative press and investigations in the administration of the project. The lack of transparency from Allen and the Institute of Ecotechnics had a negative impact on the relationship with them and Ed Bass.

It is always important to be communicative and transparent with everyone. By the lack of it that was employed by the Synergists, their problems escalated and could have been easily solved if they had proper outreach to different academic and research institutions during the construction and implementation of the Biosphere 2 project.

Dreaming Big is Important…and so is Circumstance

There is no denying that the construction of Biosphere 2 is one of the most important architectural achievements in our time, and the impact and research that came forth from it is definitely valuable and still being studied today.

Spaceship Earth does a phenomenal job of depicting how collective determination among like-minded individuals can accomplish grand achievements, especially for the benefits of others. However, the documentary also exhibits two different aspects that really gave way for this to be done: a lot of financial resources and privilege.

Keep in mind, this project was heavily facilitated by Ed Bass’ involvement within the project. Without his willingness to invest $150 million into the construction of Biosphere 2, it probably would not have happened.

There was also a sense of privilege that was underlying throughout Spaceship Earth that was glossed over very quickly by Matt Wolf. I have a feeling that if the project was headed or funded by non-white organizations, then there would have been a different reaction from the government, media, and even public in the intent and purpose of the project.

Regardless, Spaceship Earth is an awesome watch of a documentary, and does great job presenting on how human collaboration can achieve marvelous goals and help spur creative and scientific inquiry on a large scale.  This is definitely worth the watch and will definitely make you think about the potential that we all have a group, as well as the potential that is within ourselves.