The beauty of live air is also the tragedy of airing live. They are two sides of the same coin. The first Moon landing. The Columbine massacre. The Fall of the Berlin Wall. 9/11. Princess Diana’s wedding. OJ Simpson verdict. These crystalline moments in our brains show us that nothing could ever be the same. They can change us for the worse, but they can also change us for the better. Welcome to the eighth episode of Kidding (Showtime), “A Seat On The Rocket.”

We are greeted to scenes of smiling kids in classrooms as NASA is getting to launch one of their most ambitious missions yet, the Space Shuttle Challenger. This is a big deal for students as it features the first civilian in space. As the launch ignites, all the children’s light up for a matter of moments… until they dim in abject horror. This includes Jeff (Jonathan Dylan King), now at Ohio State. Shocked, he goes to the dorm of Deidre (Lena Drake) and has an idea of how to ameliorate tragedy on the air.

Back to modern times, as Jeff (Jim Carrey) heads back into WROT, noticing some vandalism with pickles. On air, speaking as Jeff through the identities of Pickles-san , Senor Pipinillo, Smorgas Gurka and himself, Jeff reassures the camera that though his family left him, he’s okay with that because he’s found a new family- his viewers.

During his break attempting to learn Nigerian for Baba Pickles, Derrell (Alex Raul Barrios) informs Jeff that Peter (Justin Kirk) is drunk in Hopsquatch’s giant hand. Peter is turning jaundice from drinking due to Jill refusing his proposal at Hershey Park.

At the house, Jill (Judy Greer) is so furious with Will going to a funeral unannounced, she can’t even listen to Jeff make the case for Peter. Will (Cole Allen) hears this excoriates Jeff can’t fight for his now ex-wife. Jill is fighting for Peter because she wants to mend him. Will antagonizes the situation by telling his dad that he can’t even be happy that she said no. Jeff leaves with the last word, causing Will to storm off. I notice he’s donning now purple tight jeans and a green hoodie. Sound familiar?

Throwing all of Phil’s artifacts back into his drawer, Will storms out and goes to Seb’s (Frank Langella) house and complains that everything is upended. Grandpa wants to get his nut because he’s going to die, so he shuts the door.

Back in Serbia, Josip’s (Johnny Kostrey) listen-to-me Pickles lights up and wakes him up. This is Jeff’s call to action. To find 24 new international Mr. Pickles and it starts with him- “Mr. Sour Cucumber.” Josip’s eyes light up and just as he’s about to accept, Jeff’s app goes down. His cell rings and someone on the other threatens they know where he lives.

We are now greeted with a troop of the Pickles Platoon and two girls talking about the existence of god or lack thereof according to Mr. Pickles. Scout leader Bobby Belongo (Matt Gourley) assures them that god exists in different forms for everyone. They don’t seem convinced. Clearly, Bobby’s pissed. He picks up their pickle jars with painted lids and loads them up into hatchback crudely painted to look like Jeff’s. Creeeepy.

Approaching the studio, Deidre sees the same smashed pickle jars with the numbers 10, 9 and 8 painted on the lids with glitter. Something tells me blastoff is imminent.

As Deidre oversees Jeff’s taping, she’s interrupted by the TV behind her. Ever since Scott’s (Bernard White) acquisition of the characters, he’s been pimping them out. It started with Snagglehorse shilling reverse mortgages and to this- Astronotter chilling with Blake Griffin in the new Mercedes S-Class.

Deidre now looking for ammo asks Darrell to help in some good PR for Puppet Time, starting with the letter Nasa wrote Seb back in ‘97. They wanted to send Astronotter to the space station, but Seb refused on the risk of it ending up like the Challenger and the company having to eulogize their own. Now Deidre wants NASA on the horn. Something is clearly up her sleeve.

At Seb’s both “Louise” (Annette O’Toole) and Blair (Matthew Hancock) emerge, in one when he’s in the room and one when he’s out. As they enjoy a little bit of romantic time, Will is heard rapping at his door from before. After blowing his own grandson off, Seb is more pleasurably blown off.

At a promotional shoot with Astronotter and the car, Scott tries to assert his manhood to Blake by talking about how his salt and pepper look really gets women’s dicks hard, “If ya know what I mean.” Yeah, Scott, I mean Blake can shoot a J and fail, it’s no big deal. Scott, you just try to shoot and ya fucking brick. Him talking further is just making the nails on the chalkboard worse. It’s like, just shut-up man!

Deidre interrupts them and pleads to have Astronotter back. Scott agrees to the tune of $28 million. Deidre has no choice but to storm off. Scott complains he’s had to put up with her for 25 years.

Flashback to Deidre in college leaning on a then college-age Scott (Jared Wernick). He reads to her the acceptance letter to the Japanese Design Exchange program. Deidre doesn’t seem happy though due to the distance from everyone. That night, Deidre sees Christa McAuliffe on tv, talking about pushing yourself into the unknown. The choice is clear for Didi.

That is we see Deidre experience the Challenger Explosion on TV. Jeff knocks on her door and this is the beginning of Deidre as we know her with her first design being Astronotter. On the set, college Jeff loves it but suggests the character make noises instead in lieu of words. It’s a character misunderstood.

In the present, Darrell informs Didi that the head of PR for NASA may have a seat on the rocket he’ll be launching in a few months since he grew up with Puppet Time. Deidre is without a doubt taking him up on that offer.

Deidre grabs Maddy’s ax as Jeff is earlier seen making sandwiches. I will say anybody with an ax is fucking scary but a woman scorned brandishing one will make anybody renegotiate. Scott, scared shitless around the studio tries to negotiate Astronotter for one day with his daughter. Before resolution can be made, Deidre is informed that due to Jeff’s information being leaked on a forum from the talking dolls, TOYCO had to shut the entire network down due to threats.

This prompts Jeff to immediately turn the cab he’s in around, even though he’s supposed to have a flight to Serbia.

As we see Bobby Belongo fill up pickle jar 1 at the gas station, trouble is headed their way.

At the house, Jill informs a puking Peter that she’s just not ready for marriage yet. I get it. She’s in such a whirlwind of emotion and events that how could she be ready for something like that? She does reassure him though that Peter makes her feel something truly special.

As Jeff bangs on the door, Jill puts on Peter’s ring as a sign of good faith- to say yes when the time is right. Peter agrees. Since Jeff can’t get to them and Will is ignoring his dad, Jeff frantically pries the numbers off the house.

Mr. Pickles first debut of Astronotter is intercut with Bobby getting ready to firebomb. Oh, and he does it… Just on the shitty one next door. As they try to extinguish the flames, Will notices his house has been changed to 4181, the next number on his library card.

Later that night as he crosses off that number, guess whose alarm clock goes off?

This episode, also directed by Bert & Bertie had a lot more urgency with the characters having more agency. The Jas Waters penned script had shown flashbacks and flash-forwards through the origination of what becomes Puppet Time on the air.  This episode also had a special place in my Thump-Thump. Though I was alive, I was too young to remember the Challenger tragedy. My mother did teach at a middle school though that had honored that very crew. As a child, I remember wandering those hallways in awe of each corridor possessing names of the deceased, as if they were street names. I later attended that middle school and of all the memories I’d made there, the names of the hallways will still haunt me to this day.

Robert J. Kijowski is a screenwriter who enjoys a good chuckle and an even better weep when indulging in art both good and even better bad. He enjoys the company of strangers in a theatre but adores the camaraderie of friends watching Netflix. He also loves to talk- a lot. This can be read through his recaps and reviews on the Workprint or heard through his weekly movie podcast, After the Credits. His presence can be felt through Facebook, Spotify or Ouija. Don’t use the latter though- he almost always ghosts people.
@writer_wronged
Previous Kidding Season 2 Recap: Episode 2.07 “Sugar Free Ecstasy”
Next ‘The Magicians’ Review: The Dark King’s True Identity Revealed 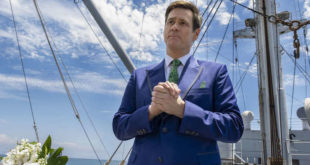 They say never meet your heroes. I think that’s fair game, but I also think …