‘Homeland’ Season Finale: A Lesson in Not Knowing Jack

Homeland’s fourth season has finally come to a close, and much like its predecessors, it was a somber affair. The finale didn’t offer many answers, and instead followed the Homeland Manual to Keep Viewers Guessing, and added about a dozen more questions. (Speaking of questions, did we ever figure out who the mole was in season one?) Admittedly, I was a bit disappointed, at first, in the drastic change of pace. The last episode ended with such a bombshell in Carrie seeing Dar Adal riding in Haqqani’s car that seeing the final episode beginning with Carrie and her sister folding her deceased father’s clothes was a bit of a let down.

However, after a few moments, I found myself enjoying the episode as it focused almost entirely on Carrie’s development and her relationships with everyone else. I like this Carrie: intelligent, yet still rash and impulsive; caring, but still selfish (which is refreshing). The episode hit close to home for the actors. As Carrie mourned the death of her father, the cast and crew also mourned the death of colleague James Rebhorn. Even though much of the episode took place during a funeral, it seemed to be the happiest the characters have been in a long time. Watching Carrie, Quinn, Saul, and Lockhart toast Styrofoam cups filled with whiskey made me long for that foursome to stay together.

Sadly, that only lasted about thirty seconds, with Saul seemingly siding with Dar Adal, Quinn leaving the country, and Lockhart probably out screaming “fuck” at anyone he can find. The relationship of these four is in shambles and we’ll have to wait until next fall to find out what happens to them. 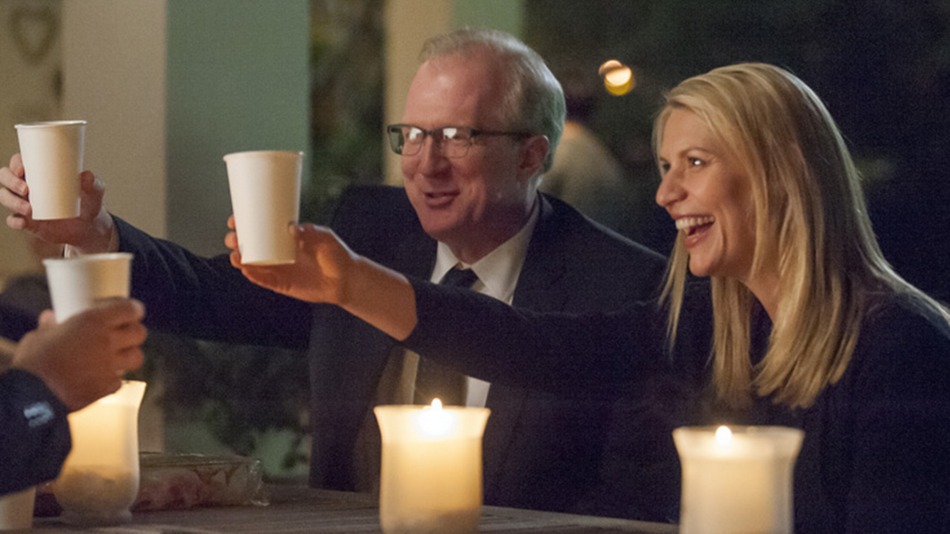 Now, let’s how my predictions went down for the final two episodes:

Quinn DID go on a badass Haqqani hunt, and his plan for taking out the terrorist was nothing short of brilliant. Alas, the boom boom plan did not go as intended and now Quinn is back on the sidelines. It seems he hasn’t give up his badass lifestyle, what with going on Adal’s (seemingly suicidal) mission. Unfortunately, I don’t imagine we’ll see much of that happening in season five, since most of the show is from Carrie’s POV. But hey! He’s still alive! At least we’ve got that going for us.

We saw Tasneem briefly in both episodes, taking charge of the situation in Pakistan. It seems she has become an even larger figurehead within the I.S.I. and it would be a CRIME if she didn’t have a bigger role next season. In fact, I’ll riot if she doesn’t become the main “enemy” for Carrie and the CIA.

3. KHAN DIES, PROBABLY AFTER HOOKING UP WITH CARRIE

He saved Carrie from murdering Haqqani, but alas, no bedtime for this pair. And he managed to survive the season, presumably by not letting the director film him in case of an accident. Kudos to you, Khan, for still breathing, ya jerk. Yea, that’s right. I’m bitter because Khan failed me by not stopping the almost certain Carrie and Quinn relationship. I’m so angry I want to eat my keyboard but I won’t because it’s a nice keyboard and I need it to finish writing this article. Homeland, do you want Carrie or Quinn to die? Because that’s how you get main character deaths. AND. AND. For once, I really just want a solid male/female relationship that doesn’t turn into romance. I thought there was a chance for Quarrie to be the chosen ones, but its squashed dreams for dinner again, kids.

2. THE BOYDS GO ON A ROAD TRIP TO REKINDLE THEIR MARRIAGE

I’m the judge here and since we haven’t seen either Boyd, I’m going to give this list a check mark to feel better about myself.

1. CARRIE STAYS IN THE CIA; SAUL LEAVES THE SHOW

It pains me that I was wrong about this prediction. I was so sure that after Saul’s torture, he would want nothing to do with the CIA, let alone anything even remotely like working WITH Haqqani, as Dar Adal proposed. It seems that the imprisonment has changed him, and I suspect he’ll be a less forgiving man now, but I’m still baffled at this move. It does, however, make for great TV, since Carrie has one foot out the door, ready for a chance at a family.