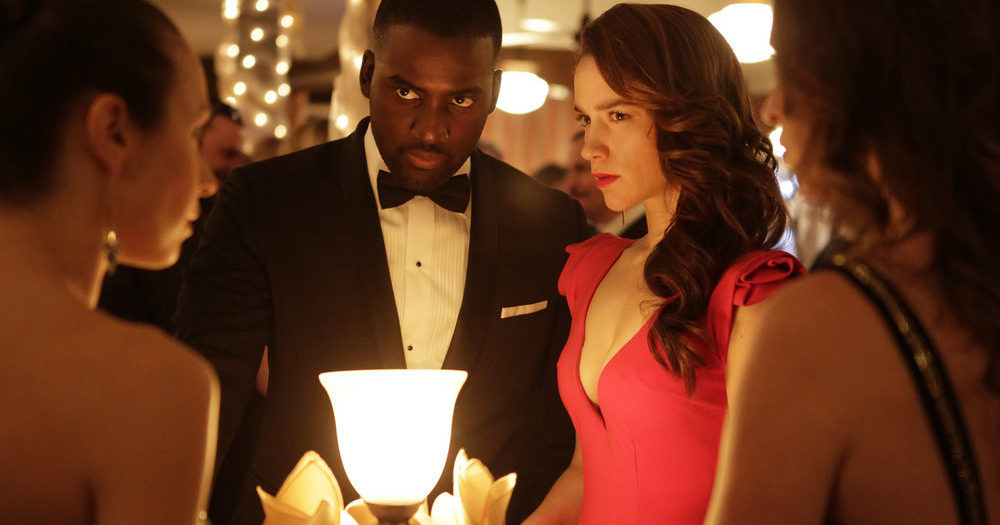 ‘Wynonna Earp’: After “House of Memories” How is Anyone Still Not Watching This Show?

This week on Wynonna Earp: Bobo does origami, Willa remembers more of her past, and mother of god Wynonna in that red dress is doing things to me.

Spoilers through episode 12 of Wynonna Earp, “House of Memories.” And there are some spoilers, kidlings. Lots and lots of spoilers.

I can’t even wrap my head around words after that episode of Wynonna Earp. What the what is going down in Purgatory right now? I don’t even know. My heart’s all atwitter and I’m scared for the season finale and look, I’m not going to be able to get my feelings straight, okay?

The episode starts off in the best way possible, with Wynonna punching Whisky Jim in the teeth. But Willa isn’t okay with just violence; she want answers and Jim’s not too keen on giving them, what with his whole tied up situation he’s got going on. But Willa has no chill…

And decides to just shoot Whisky Jim/Bourbon Bob with Peacemaker. She’s come a long way from that timid little girl who got whanged in the head with a chamber pot and I can’t say I entirely trust that kind of anger, but hey, Earp girls have their issues. Willa’s issue is just killing people whenever she doesn’t get what she wants. I don’t think Purgatory is the kind of place that encourages regular therapy sessions, but maybe for Willa they should make an exception.

Dollface is all, “Don’t worry, I can help. I know how to hypnotize people.” And Wynonna is like, “Yea, it’s all making sense now.” Willa sees visions that we’ve already seen a few dozen times now, Papa Earp being dragged away and then shot. Nothing too ground-breaking there, but for Willa it’s like she’s seeing it for the first time and she gets emotional. I don’t buy it. YOU HEAR ME. That girl has too much anger in her heart to care about “Daddy.” ANYWAY. Willa heads home to walk in on #WayHaught being fucking ADORABLE and playing doctor and she’s like the one person in the world who isn’t all aboard the S.S. WayHaught, which is a travesty, but hey, all good ships have to deal with pirates eventually and this is just another test on the High Seas of Romance.

Okay, I admit that’s a terrible metaphor. I’m not changing it.

Waverly is SERIOUSLY too nice to Willa in that exchange, especially when Willa is all, “Oh was I a bitch again?” YES, YES YOU WERE. YOU LEAVE OFFICER HAUGHT ALONE YOU MONSTER.

Back at the police station, Wynonna suggests that maybe Doc-stache tried to kill Dollface and Dolls is all, “Nah, he’d bring the dynamite himself.” AND HOW CUTE IS IT THAT DOLLFACE IS DEFENDING DOC TO WYNONNA. Then Wynonna mentions casually that the Machetes have a chapter in Purgatory and she totally doesn’t know them or anything just she heard from a friend of a friend about them and you are being suss AF right now, Wynonna. Nedley then barges in on their t-shirt design meeting and says there’s some bikers being all nefarious and shit so maybe the wonder duo should check it out.

Bobo gets a nice shave and WHAT IS IT about villains and needing a good shave from their underlings?

Bobo then snacks on some poor woman’s blood and my feelings for him are starting to waver.

At the Homestead, Waverly and Nicole share a moment in the barn and THIS IS NOT A DRILL PEOPLE. THEY ARE KISSING AND IT IS ADORABLE AND LOOK AT THEM. WHAT A TIME TO BE ALIVE.

SHE DID THE HAIR THING.

Ahem. Is it hot in here? Just me? Okay, well, the moment doesn’t last too long because Willa “Buzzkill” Earp interrupts them and this happens:

Nicole leaves and Waverly instantly turns on Willa; all that sweetness she had before in the kitchen is out the gorram window. FRESH OUT OF SUGAR. Wavylays reminds Will.I.Aint that she was kind of a jerk as a kid and I’m not really sure where Wavylays was going with that story, but HECK YEA STAND UP FOR YOURSELF. Tell her off for ruining that steamy moment.

Back to our revenant-fighting duo, Wynonna and Dolls break into the biker gang palace and Dolls punches a dude in the stomach for littering. He is the embodiment of the “LITTER AND IT WILL HURT” campaign. Inside, the pair gets into a bit of a tussle and just as Wynonna is about to put down a revenant, Peacemaker decides to go all limp on her and not fire. It’s okay, little buddy. Happens to the best of us.

They learn that Judge Cryderman is behind the attack on Dollface and when they find him, he’s trying to kill himself. He confesses that Bobo is having a shindig and everyone is invited, which is totally not suspicious at all. I mean, Dolls, I know you have a love for fashion but could you tone down the “I’LL GET THE DRESSES” a smidge?

Poor Doc finally makes his appearance and we learn who clocked him in the noggin, one of Bobo’s goons who did really well in Chemisty class. He’s experimenting on humans and it’s going well enough that Doc’s mustache is quivering. Doc tries on his best Wynonna impersonation, making snarky comments when his life is on the line, and it works well enough for him to earn the trust of Bobo’s chatty and creepy minion.

Will.I.Aint goes for a little stroll and stumbles upon Bobo, again, and the two share a moment. There is DEFINITELY something going on between these two and I’m kind of skeeved out by the possibility of Bobo romancing a 14-year-old girl. I GUESS it was an okay thing to do when Bobo was still human, but come on, man. Anyway, Wavylays shows up and apologizes for calling Willa a bitch, in her head. Only Waverly would apologize for things she’s THOUGHT and not actually said.

The pair head out in search of the lost origami swan’s home and find a gigantic treehouse in the middle of a field. Now, I’m not one to question the realism of a science fiction show, but 1. there’s no way that tree can realistically hold up a tree house that large, I’ve tried, and 2. NO ONE saw that thing from miles away and thought to inspect it?

Inside, Willa has an epiphany and remembers everything that happened to her, but she doesn’t quite take the time to fill in poor, confused Wavicorn.  Basically, she was a prisoner in that tree house until Constance showed up and wiped her memories, but now, Willa remembers, and soon, someone is going to pay for the things she’s suffered. Maybe. Maybe not. I don’t know her life. But she’s acting awful nice now and I know I don’t trust that shit.

The party kicks off and every single person on the show looks fucking FABULOUS. Dolls is killing me with his eyes, Waverly looks like a damn mermaid, and Wynonna, whoa, Wynonna.

Willa raises her voices about 3 octaves and that’s a red flag there’s some shady shit going down. Why Waverly is the only one perceptive enough to notice is beyond me. Dollface, you are supposed to be trained in these kinds of shenanigans and you’re all, SURE LET’S DRINK SOME BUBBLY. LET’S BUY SOME DRESSES. WHO WANTS TO KISS ME.

Wynonna shares with everyone a letter she hid years ago that details some of the stipulations of the Earp curse. If the Earp heir willingly leaves Purgatory with a revenant, the curse is broken, but the revenants escape the Ghost River Triangle. Ward Earp tried to make that deal with Bobo (AKA Robert, ew) years ago, but then Wynonna got in the way and the revenants took Willa as insurance.

The good times come to a screeching halt when Champ decides to get all jealous and woman-hatey, taking out his frustrations on WayHaught, but before he can finish his grand speech, he starts to choke on his own bullshit. Nicole arrests him because FUCK YEA SHE DOES.

Wynonna, of course still oblivious to babygirl unicorn, is having a moment with Dolls. And I mean, she’s having a real moment. Not only is she getting all vulnerable but she’s telling him that without Peacemaker and without being the Heir, she doesn’t know who she is. Dollface tells her she’s more than “just a girl” and confesses to Wynonna that he needs her. Well, with all the hotness he’s been dropping lately, OF COURSE Wynonna kisses him. And then OF COURSE Doc sees it, just as he’s about to be a hero, and my heart fucking SINKS. This is a love triangle where I truly have a hard time deciding which side I love more, but uggghhhhhhhhhhh I can’t handle a heartbroken Doc.

And like a friggin’ hero, Doc does his duty, not acting out, not confronting Wynonna or making a scene, but he respects Wynonna’s decision and moves on. He smells the peaches and reacts accordingly, telling them not to drink the champagne, but it’s too late. Most of the town is already drunk and poisoned. Thankfully, none of our lovelies drank the stuff.

Bobo finally makes an appearance and loudly tells everyone that “Oopsies the champagne is poisoned, but you can have the antidote if you bring me Wynonna Earp, dead or alive.” Well, shit.

Somewhere on the outside of town, Willa and Bobo meet up and I FUCKING CALLED IT. YOU CREEP. HOW DARE YOU CHEAT ON ME. I MEAN, *ahem* how dare you seduce a child! You monster!

Willa calls him Robert (gross) and they walk down the street, leaving Purgatory writhing in pain.

WHAT. THE. WHAT. WILLA YOU CHEAT. I TRUSTED YOU. I DEFENDED YOU TO THE INTERNET. HOW COULD YOU.

This was BY FAR the best episode of the series and that’s saying a lot because Wynonna Earp has had some really solid episodes in its first season.

I know I shouldn’t and I know there’s some darkness in him, but I LOVE Doc. After this episode, I’m solidly #TeamDoc. Dolls and Wynonna have awesome banter, but damn do I love Doc.

It would be SO EASY and SO CLICHE for this show to kill off Nicole. In any other show, I’d have expected it by this point, but THANK THE ALMIGHTY GODS that Wynonna Earp is not like every other show. They respect the fans enough to not do that shit.

Seriously, this show needs to get renewed already.

Don't let the fancy nerd duds deceive you; Jen’s never been described as “classy.” You can find her on Twitter where she stalks all of her favorite celebrities: @jenstayrook. Or you can find her on Steam or Xbox dying in every game she plays as "Rilna." Email: jen.stayrook@theworkprint.com
@jenstayrook
Previous ‘Person of Interest’: “.exe” Review
Next ‘Outlander’: “Vengeance is Mine” And Revenge is Sweet

At SDCC 2020, showrunner Emily Andras ran through the ins-and-outs the much-anticipated Season 4. With …