Look, we go back a long time. I’ve been a fan of your show since I was a kid, giggling at the sight of the name “Lake Titicaca” on my high school Geography homework. I bought episodes of The X-Files on VHS — back when full seasons weren’t available for purchase and you could only buy two episodes per tape or a box set that contained three tapes (for a whopping total of six episodes out of twenty-four!). If I was lucky, I bought a full “season” which culled each year down to just twelve episodes. I collected books, magazine covers and I recommended the show to friends and family.

Which is why I feel a touch sullied when you come back and fork over episodes like “Mulder and Scully Meet the Were-Monster”.

Yeah, I get what this episode is “supposed to be”. I get we’re going for “Jose Chung, Part 2” or more clever renditions of “Humbug” and “War of the Coprophages”.

This episode isn’t any of the aforementioned. 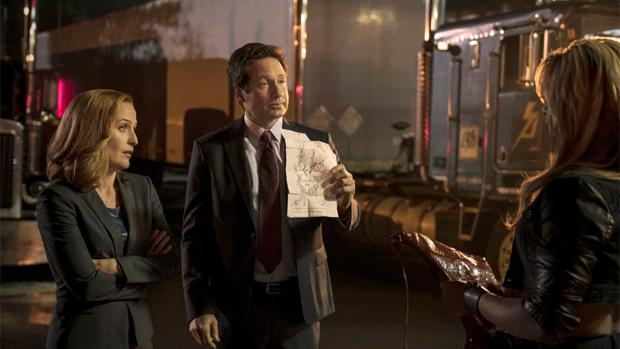 Granted, your premise is pretty neat: by day, Guy Mann (Rhys Darby of HBO’s Flight of the Conchords) works a crappy job as a salesman at a nearby cellphone depot and worries about his paltry income. By night, he’s a were-lizard who may or may not be attacking locals and he’s very sorry he’s doing it. But there’s a twist: Mann’s actually a lizard by nature who became human because a human had attacked him.

His plight mirrors Mulder’s: the fear of being mortal and never truly figuring out one’s place in the world.

This should be enough to give us a good episode. But, you see, there’s witty attempts at ironic self-examination and then there’s camp. This episode is the latter by a huge margin and we should never, ever confuse the two. Besides the clever backdrop, the rest of this is self-serving garbage masquerading as wit.

If only it hadn’t insisted on hammering (the reference to Scully’s dog, Queequeg) us (Mulder sleeps in a red speedo in homage to his swimming pool scene in the second season) over (the graveyard has a Kim Manners headstone in homage to the former show director) the head (another headstone belongs to former A.D. Jack Hardy) with (Mr. Mann’s hat is the same one Kolchak wore in Kolchak: The Night Stalker) reference (Scully jokes about being “immortal” referencing the conversation in “Clyde Bruckman’s Final Repose”) after reference (Pasha works as an animal control expert a’la “Tooms”) after reference (Pasha likes to “torture small animals”, referencing Mulder’s serial killer profile) after reference (the guy running the shoddy motel is a peeping tom, like the midget running the motel in “Humbug”) after reference (the stoners in the episode are the same ones from “War of the Coprophages”).

It overshadows everything — even the yawn-inducing, exposition-filled, exploitative climax between Mulder and Mann which sees Mann revealing the last 72 hours of his life (which includes him having sex with Scully in the stockroom of his cellphone shop — don’t ask, this just adds to the crap factor) before revealing his true self and convincing Mulder that he should never give up his belief in the unknown.

We’ve already had “Jose Chung”. And this show has already tried to re-capture lightning in a bottle with episodes like “Bad Blood”, “The Post-Modern Prometheus” and “Arcadia” — and they were all pale imitations. While I’m already aware of the positive buzz surrounding this episode and the endless praise from the critics, I’m sorry to report that “Were-Monster” can join that honored list of Terrible Things Made Better With Nostalgia Goggles.