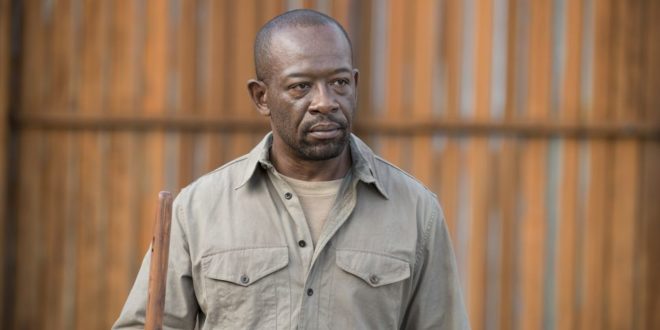 The Walking Dead struggles occasionally with clumsy characterization; characters will debate, wallow, or make dumb decisions for the sake of some thematic statement or added drama. These moments are particularly problematic when they interfere with the story’s plot or pacing–few things derail an episode as quickly as a pointless death or a lengthy ethical debate. What “JSS” accomplishes especially well is weaving the characterization into the action in a way that doesn’t diminish either or interrupt the pacing of the episode. From its simple, chilling cold open to the pandemonium of Alexandria being raided by the Wolves, the tension ramps up quickly and the episode is infused with plenty of small, effective character moments that don’t weigh it down.

The Alexandrian’s utter lack of experience is on full display as the are caught off guard by the raid, but of particular note is Deanna’s apparent cowardice. Her son Spencer’s unwillingness to enter the walls and help is more straightforward, but Deanna carefully explains to Maggie the many reasons why she should hide instead. Others get similarly concise character moments. Jessie has difficulty dealing with her sons after Pete’s execution, but all that frustration and desperation boils to the surface as she manages to kill one of the Wolves invading her home. Denise, the anxiety-ridden new doctor, undergoes a trial by fire as she attempts to tend to the wounded during the raid. She fails to save her first patient. but there isn’t much to say in terms of reason or comfort. Tara simply reminds her, “make sure you get her brain.”

The greatest strength of “JSS” might be its willingness to embrace ambiguity without dwelling too long or pick apart on any single conflict (there’s plenty of time for that after the dust settles). Take the parallel storylines of Carol and Morgan–while the former is a cold, hard realist, the latter avoids killing with the belief that all life is precious. Neither have the time or luxury to debate worldviews (nor would Carol have the patience) as they rush to save Alexandria, but the episode nevertheless manages to do the complicated issue justice through actions rather than words. Both succeed in driving off the attackers, but neither solution turns out to be perfect. Carol sees too much of the Wolves reflected back in herself as she tries to wipe the bloody W from her forehead, and Morgan is taunted by the Wolves he’s unwilling to kill (one ominously picks up a gun before retreating). Their arcs this episode are simply shown, conflicts and all, without unnecessary dialogue or any attempt to dissect the nuances. The episode ends with the two crossing paths on their way way home, without exchanging a single word.

The title of the episode refers to a mantra that Enid lives by: “Just Survive Somehow.” Although heavily featured in the cold open, the meaning behind the letters “JSS” isn’t revealed until well after the raid is over. Its meaning resonates in a way other philosophies haven’t in The Walking Dead–the three simple words evoke a sense of resignation to the horrors of this new world. It’s not quite acceptance or defeat, but rather, an assertion that all of the ethical conflicts, moral quandaries, guilt, and frustration don’t really matter. Just survive somehow.