‘Supergirl’ is my modern-day ‘Xena: Warrior Princess’ and I’m so in love

I know that Xena: Warrior Princess is still in talks to get a reboot, but until that day comes, I’ll be subsisting off of Netflix Xena reruns on a daily basis. (No, seriously.) Xena, for me, has always been that comfort show, the one I go back to when I’m in a bad mood and need something to make me feel better. I know every episode by heart and still it manages to surprise me. In my many years of searching, there hasn’t been a show able to match that pulpy goodness, the happiness, or the strong characters for a long time.

And then Supergirl came along.

I’m not sure which episode it happened, but at some point, Supergirl starting scratching that itch for a Xena-like show. Don’t get me wrong, Supergirl isn’t going to fill the chakram-shaped hole in my heart with only 17 episodes, but like Xena, it’s a show that’s bursting at the seams with joy and hope, and dammit if it doesn’t make me feel empowered as a woman.

For starters, Supergirl is full of women.

One of the things we feminists love about Xena is that it’s chock-full of ladies. Female heroes, female villains, female damsels, females in the background, females EVERYWHERE. It’s almost like Beyonce was singing about Xena when asking, “Who run the world?” (Girls. Girls.) And what’s more, Xena never relied on a man to save her. That was up to her and Gabrielle and my god, as both a young girl and an adult, it’s wonderful to watch.

Supergirl doesn’t rely on the men in her life, either, unfortunately for both Winn and James. Even in the Flash crossover episode, Barry Allen was relegated to eye candy, there for a laugh, a smile, and a few kind words of wisdom. And thank goodness for that because how disappointed would we have been to watch Barry zip in and save the day? Supergirl doesn’t need that and neither do we as fans.

And all those women are kicking ass.

Let’s all just take a moment to appreciate Kara’s arms in the Supergirl suit. I don’t know if that muscle definition is real or fake but hot damn is it refreshing to see a woman who looks like she could really knock you into next week, just like Xena and Gabrielle did to, well, everyone.

And it’s not just the Kryptonian taking names; Alex is a physical force to be reckoned with, as well as intelligent and fiercely loyal. Cat Grant is a self-made woman who looks to please no one and isn’t afraid to stand up for what she believes in, especially when it comes to defending Supergirl. And then there are all those other great female characters like Lucy Lane and Astra who also shine when given the spotlight.

At it’s heart, Supergirl is about the relationship between two women.

Xena and Gabrielle’s give-and-take relationship sustained the show for six seasons. Without it, there’s no way the show would have achieved its large, vocal fanbase who still, 20 years after the show’s original airing, attend shows and conventions in droves. We love this pairing (and some of us still don’t want to let it go).

For Supergirl, it’s the relationship between sisters Kara and Alex that guides us. Obviously their relationship is lacking in the subtext (thankfully–we don’t need some Lannister nonsense up in here) but it’s still up to the two of them to save the day. It’s this relationship that keeps Supergirl from being like every other comic book show on television. To some extent, we can see that strength of partnership in Kara and Cat’s relationship, but theirs is a more antagonistic affair. As I’ve said before, “Where Cat Grant keeps Kara grounded in reality, Alex keeps Kara flying.” Alex sees the world in Kara, believes her capable of doing anything. As someone who’s big into vagina loyalty, it makes me utterly gleeful to see two women support one another unconditionally.

The romance is minimal.

You could get into some lengthy internet arguments about whether or not Xena and Gabrielle were romantically involved. Personally, I’m of the mindset that “soulmates” was always more than just friends (and even Lucy Lawless has said she considered them married) but there was never a big to-do about either of them romantically. Sure, there were boys that came and went, but Xena was about action, about saving the world first and foremost. Any romance was just a nice bonus.

I was worried for a while there that Supergirl might pull an Arrow and start putting the love triangle and emotions front and center. Thankfully, the show has gotten away from that and realized that the lovey-dovey stuff is just a nice bonus. We want to see Supergirl save the world, not fret about what to say or do around the boy she likes. Sure, the stuff with Winn and James has drifted back and forth into the spotlight, but it’s never detracted from Supergirl’s goal; it’s never caused her to make stupid mistakes. Save the day first, then kiss the boy if you want. Besides, she’s got Alex at her side helping her along the way.

Supergirl only has two episodes left in it’s first season and while it hasn’t been renewed yet (CBS, COME ON), watching this season has given me so much more joy and “girl power” than I ever imagined. Supergirl is far from perfect, it has about 10 layers of cheese you have to cut through to get to the meat, but Xena wasn’t perfect either and that doesn’t make me love both any less.

Two more episodes left in the season and I’m already a wreck.

Don't let the fancy nerd duds deceive you; Jen’s never been described as “classy.” You can find her on Twitter where she stalks all of her favorite celebrities: @jenstayrook. Or you can find her on Steam or Xbox dying in every game she plays as "Rilna." Email: jen.stayrook@theworkprint.com
@jenstayrook
Previous The ‘Fantastic Beasts and Where to Find Them’ Trailer is here and it’s, well, magical
Next Syfy’s ‘Hunters’ Tackles Terrorism with an Alien Threat 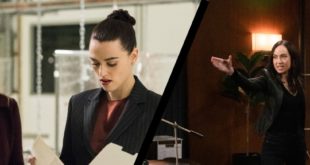 Supertrash: “Will the Real Eve Teschmacher Please Stand Up”/ “Nip/Stuck”

This week on Supertrash, Alyssa and Jen discuss Supergirl 4.20 “Will the Real Eve Teschmacher Please Stand …