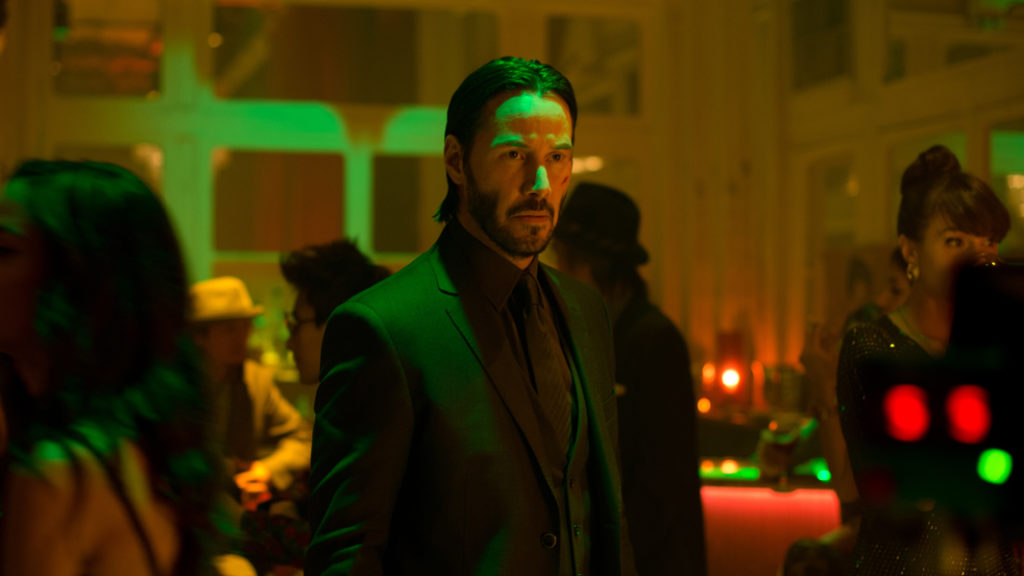 It’s slightly difficult to describe John Wick, a nifty little entry into the assassin film genre opening in theaters across the country this Friday.

Like quirky little action-revenge films such as Payback, Desperado, Shoot ‘Em Up, Crank, and Drive, Wick is a movie much like its title character: very sudden, dazzling, full of wit and with flashes of cold, calculated violence. And, when it’s over, it leaves you in complete shock, not sure if you’ll see something like it in the future.

Keanu Reeves plays John Wick, a man who just lost his wife to an undisclosed illness. All he has left is his beautiful ’69 Mustang, one of his wife’s bracelets which he keeps next to him at night, and “Daisy”, a little beagle his wife left him so that he wouldn’t be lonely. When he and the almost-reptilian Iosef (Alfie Allen) happen to cross paths at a local gas station, Iosef gawks at his car like a cat-caller. When Wick tells him that he won’t sell his car to Iosef on the spot, Wick becomes the victim of a home invasion that sees his car stolen, his body bruised and beaten — and Daisy, who he had come to love, dead from a presumed broken neck.

At this point, any ordinary Hollywood genre picture would put Wick through a losing battle with the perps in court and then transform him into an angry vigilante, making him blindly fight against impossible odds and barely surviving his plight. Wick, however, takes a violent hard left turn: as it turns out, he was a part of Iosef’s world: a city-wide fraternity of assassins and hitmen who are all above the law. They have their own little clubhouse in the form of a neo-noir, art-deco, marble and mahogany hotel, a respite for the wounded and weary members, Even the cops know who they are — and they leave them alone, no matter what is seen and heard. Wick, however, was the deadliest of the bunch before he retired; a cross between a modern day samurai, The Man With No Name and Death incarnate.

Iosef eventually learns of this through his honorable father Viggo (Michael Nyqvist), a man angry at his son’s flippant ignorance of the man Viggo respected enough to let walk away from the group. When Iosef balks at his father’s disgust, Viggo tells his arrogant son of the legend of The Bogeyman, attempting to underscore the deep shit he’s in.

“Are you telling me Wick is the Bogeyman?” Iosef asks, incredulously.

“Wick is the man you hire to kill the Bogeyman,” his father gravely intones, adding, “And now, you’ve stolen his car…and killed his dog.”

You might feel inclined to giggle at this like the audience around you (I did) but anything more than that would really be dismissive. Wick is the kinda movie that relies on witty hyperbole and ridiculously silly situations to build an outrageous world where outrageous people exist and thrive for the sake of reminding everyone that good and evil exist and that the line that separates them is very thin. It’s the kind of film with a gun battle with an arbitrary nightclub backdrop because every assassin needs to get their gun off while grooving to DeadMau5.

For what it’s worth, Reeves is good here. He knows what the material is and he knows what to do with it. His easy-going attitude is perfectly in key with the film’s happily violent tone which ranges from “ouch” to “oh, come on”. It’s really impressive that a guy his age looks ageless. The surrounding cast works well and there are a few little bit parts and cameos from famous faces that make you smile. Even the direction from veteran stuntman and first-time director, Chad Stahelski, is simplistic, yet so sophisticated.

Mind you, you probably won’t see anything new. The movie doesn’t exactly break new ground as far as the action genre is concerned. It’s your typical East-meets-West chop-socky-and-guns action theater found at midnight on cable access. It’s the type of fare not dissimilar to an unmarked Composition book you’d find in the darkest corner of your high school library, containing pages ripped from Mark Millar’s “Wanted” graphic novel, passages from pulp detective novels, sketches of epic heroes and villains shooting at one another, and other lurid material. And, much like the hyperkinetic moods of the many authors involved with putting it together, it leaves you wanting.

Even still, Wick is a rare gem in a season where the Oscar hopefuls get the most press and one of Reeves’ better films.