In the second to the last episode of Killjoys season 2, audiences are treated to a roller coaster ride of epic proportions as Team Awesome Force attempts to stop the Company’s nefarious plans. Things of course don’t go smoothly  and a lot of people die as a result.

Dutch and D’Av rescue complacent and ridiculously happy Pawter and Johnny from Old Town, but people have started dying after consuming the poisoned rations. After the lovebirds explain the Company’s plan to cull the herd, the former assassin decides to end this once and for all by going to Spring Hill, shutting down the wall, and killing Jelco themselves.

Once they get there though the place is empty and very much feels like a big fat trap. Pawter and Dutch head to Jelco’s office while the Jaqobis try and destroy the power source of the wall. Unfortunately Pawter accidentally triggers a security protocol inside the office and a holo of the Company officer informs them that they are too late and there’s currently a change of guards in Spring Hill. He sends a security team to their location and Dutch volunteers to lure them away while D’Avin helps her. Meanwhile Johnny has managed to discover that the Company officer is still in the facility and will send Dutch his location so that she can kill him. 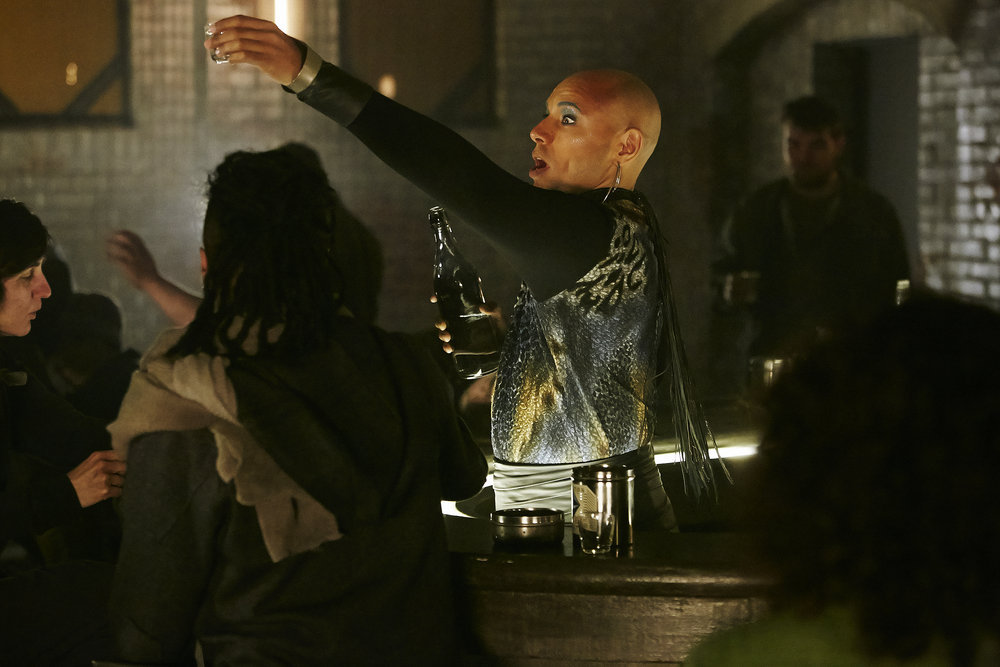 Speaking of the technologically savvy killjoy, he has to deal with a smartass program that is preventing him from shutting down the wall’s power core. He inserts Lucy into the terminal and she brings it, thwarting the annoying software.

Pawter tries to get the manual shutdown code from Delle Seyah but the other woman refuses to give it. We find out that she’s set up rations for all the other towns in Westerly and the Company is planning to do exactly the same thing in all these other places. Coming to an incredibly difficult decision, Pawter has Lucy broadcast her to all of Old Town and urges them to destroy the wall themselves because there is no other way. Then she reactivates the mood controls into rage setting that has the citizens start throwing their bodies against the electrified construct, killing themselves but trying to short out the power. It’s a horrific sight as so many people fall down dead from the impact. However it does work and the wall malfunctions and breaks down. Pawter made the incredibly difficult decision in the face of horrific circumstances.

In the meantime Dutch finds Jelco down in another lower zone while seeing tons of plasma and beds set up. Turns out the fittest and strongest of Old Town were going to be converted into 6’s, likely to fight whatever new threat is on it’s way. The Company officer tries to bargain for his life by telling Dutch that he knows where there’s more plasma because Westerly is just the beginning. Annoyed with the situation Dutch begrudgingly decides to keep him alive so she can find out what the hells is really going on, but gives herself up to the angry mob of Old Towers to give D’Av and Jelco more time to get away and enact her plan.

Herin, the angry mob leader, has been trying to get Dutch to tell him where Jelco is to pay for his crimes by poisoning her. Now every time she lies she vomits blood (fyi this toy came courtesy of Jelco’s office). Eventually, he brings in Johnny to see if she would tell him the truth. The two killjoys have a heart to heart and she does relent and tells Herin that she’s been buying time for D’Av and Jelco because they are planning to blow up Spring Hill. Upset Haron plans on hanging Dutch anyways when the Royale shakes, meaning that D’Av and Jelco succeeded in purchasing a weapon from Pawter’s once captor in the Badlands. 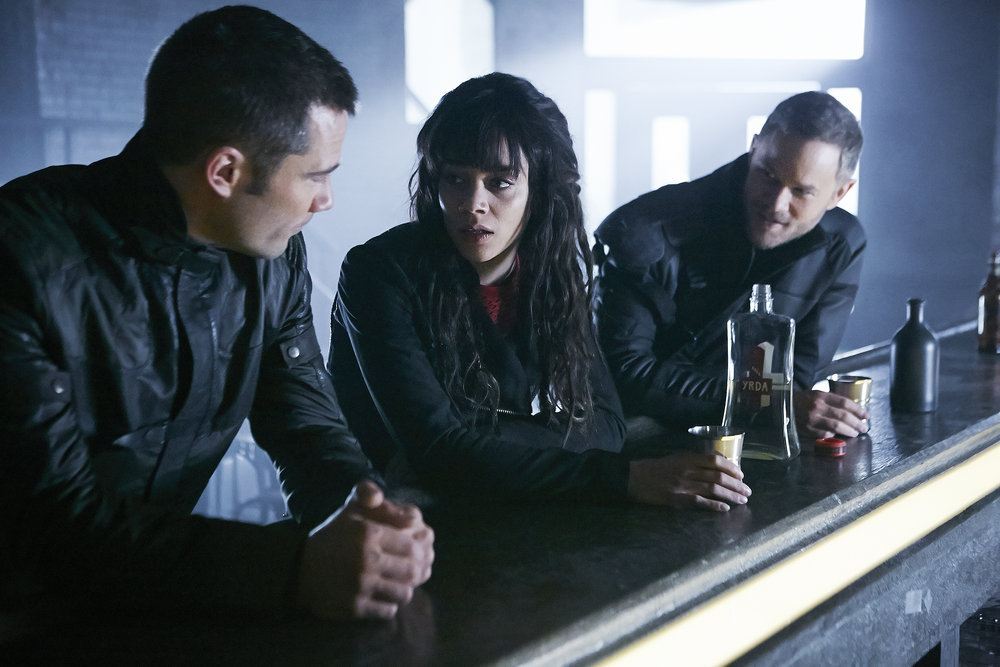 Spring Hill is destroyed and Delle Seyah suddenly appears at the Royale, claiming she’s there to negotiate Westerly’s independence. Apparently she has 30 different miners guilds screaming bloody murder if any wall gets built near their towns after seeing Pawter’s broadcast. Seyah Kendry’s conditions though are that Pawter gives up her title, shares within The Company, and her land over. After some thought the doctor agrees understanding that playing politics costs too much. Johnny suggests that she can be their ship doctor because she’ll always have a home as long as he’s there. But hey what happens to her sister??

Herin and Pawter sign the document with ink and blood and just when it seems that Delle Seyah is about to do the same, she uses the knife to stab Pawter instead. All hell breaks loose as the supposed monks accompanying her were not Scarbacks at all but 6’s. Johnny desperately tries to save his ladylove but she’s bleeding too much and too fast and there’s nothing he can do. D’Av knocks him out so that Team Awesome can get out of there.

When Dutch, D’Av and an unconscious Johnny get back onto Lucy, it’s not Jelco waiting for them but Fancy! The level 6 agent tells them that he’s let the officer go as instructed by Khlyen and he’s basically there to bring Dutch to her former tutor for a little face to face chat. 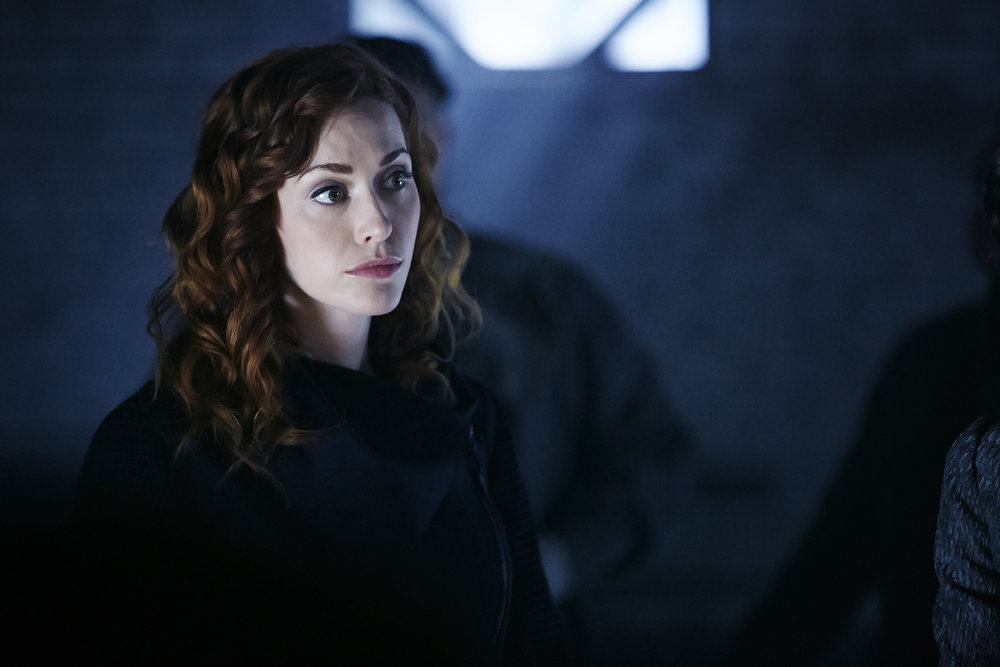 What a ride this season has been so far and I can’t even begin to imagine what next week’s episode is going to be like. This was a particularly powerful episode because I wasn’t expecting Pawter to die. She had played an important role in Killjoys so far and her crusade to save Old Town had made me grow attached to her. But like another show that shall not be named, this series isn’t afraid to kill off major characters just when you grow fond of them. It’s great television that kills you a little inside but you keep coming back for more. It’s sadistic but dammit I can’t quit you.

Killjoys won’t be quite the same with Pawter gone but it will be interesting to see how her death will impact Johnny, the rest of the team, and the Quad as a whole. There are definitely much bigger things at play that she and the killjoys only knew a fraction of. At the moment her passing seems to have been in vain though while the wall around Old Town was destroyed, Delle Seyah did not grant Westerly independence and only the farce of a peace treaty that will only try to temporarily appease the people before she, the Company, and Khlyen can get their plans back on track. But surely Johnny will be avenging her death and perhaps Seyah Kendry won’t make it out of this season either.

This episode reminded me a lot of the frantic tone of the season 1 finale “Escape Velocity” where the focus was heavy on Old Town and it’s citizens. Once again Team Awesome Force is fleeing from the area and are about to face even greater danger. This time around I suspect we’ll finally find out what Khlyen has really been up to.

Only one more episode left for season 2! AAHH!!!

@theworkprint
Follow
Previous articlePull It Together Episode 2: Team Ups
Next article‘Dark Matter’: It’s the Return of Wil Wheaton in “Going Out Fighting”