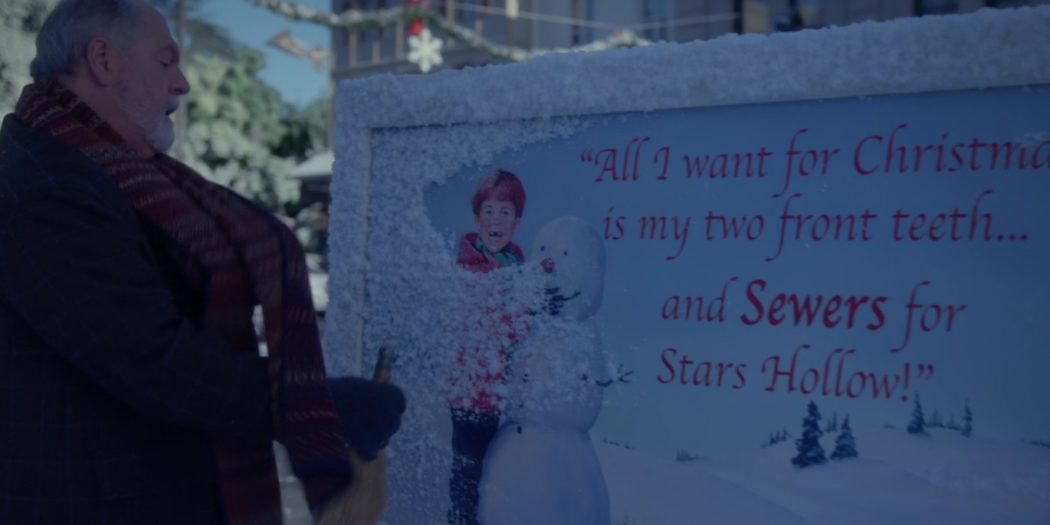 Home / Features / ‘Gilmore Girls: A Year in The Life’ Is All Quirk, No Heart

‘Gilmore Girls: A Year in The Life’ Is All Quirk, No Heart

Over Thanksgiving, nearly a decade after the series finale, Netflix released the revival to the beloved TV show, Gilmore Girls.  Gilmore Girls: A Year in the Life  explores the lives of Lorelai, Rory, and their beloved town of Stars Hollow, all of whom are now nine years older and wiser. While the highly anticipated Gilmore Girls revival brought back many warm nostalgic feelings, it lacked the heart of the original series.

Gilmore Girls: A Year in the Life was told in four 90 minute episodes, each representing a different season of the year (Winter, Spring, Summer and Fall). One of the major flaws of the series was not appreciating the difficulties of condensing a season’s worth of story arcs into this shortened format and thus resulted in the flandarization of Stars Hollow. Flandarization, named for The Simpsons character Ned Flanders, is when a show takes a small, and usually quirky, trait of a character and over time exaggerates it to the point where it defines that character. Sitcoms are notorious for playing into this trope. Think of the evolution of Joey and Phoebe’s stupidity throughout the run of Friends, or Eric Matthew’s from Boy Meets World. The nuances of all three of these characters were lost by the end of the series and they were reduced to only being the “dumb stupid character.” And this is the same fate that faced Stars Hollow in the Netflix revival of Gilmore Girls. 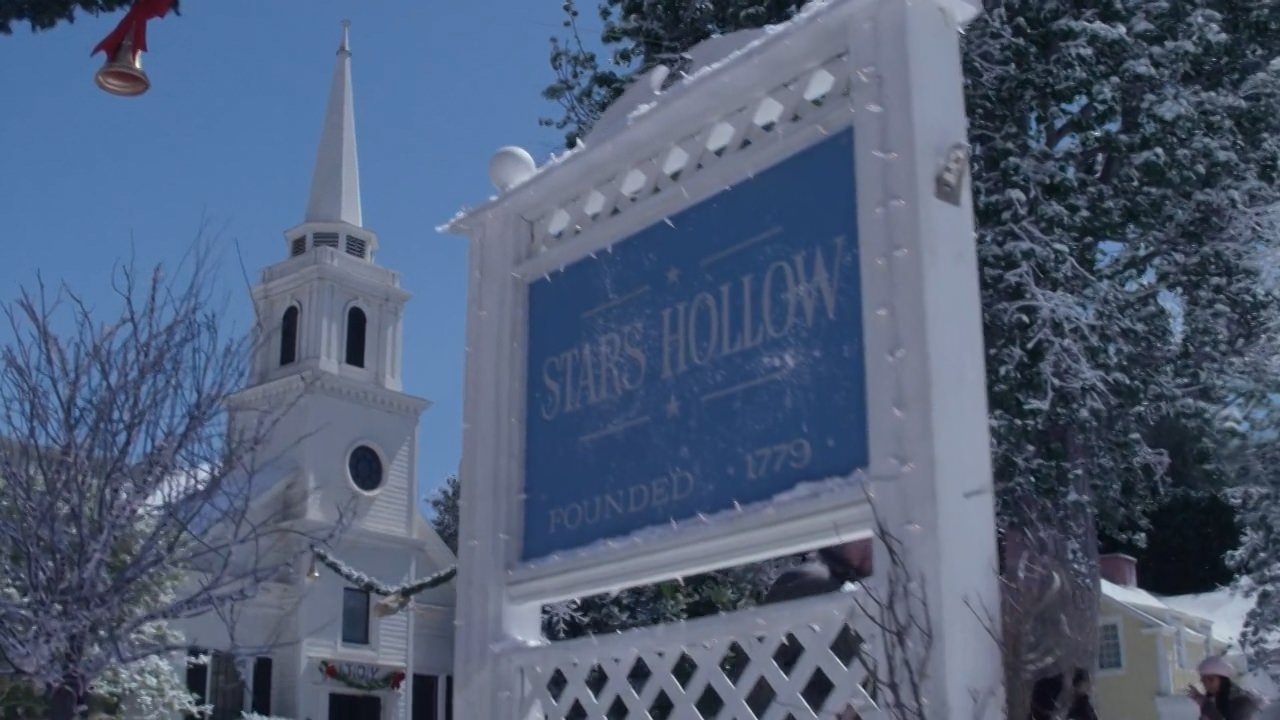 Most of the Stars Hollow sub-plots read as random and out-of-place to the point where I am not sure the writers could explain their placements. I imagine that one day the show runners brought a confetti cannon into the writing room and asked everyone to jot down any ideas they had onto little pieces of paper. They then loaded that confetti cannon with those tiny pieces of paper and shot it at a storyboard for the series which was covered with sticky stuff.  All ideas that stuck to the board were inserted into the show at the exact point they landed and that was that.

The Stars Hollow plot lines that worked were the ones that fit into the narrative of the series; for example, The Secret Bar. The Secret Bar was first mentioned in “Spring” when Babbette almost spilled the beans of its existence to Taylor. We were then introduced to the Secret Bar, located in a back alley of Stars Hollow, in the following episode when Michel brought Lorelai there. The Secret Bar was successful as a side story because it served numerous purposes: a place for Lorelai and Michel to meet outside of the Dragonfly Inn, a platform to demonstrate that Zach and Lane are still able to perform music outside of their living room, and most importantly, it showed the entire town’s teamwork to keep the bar secret from Taylor. 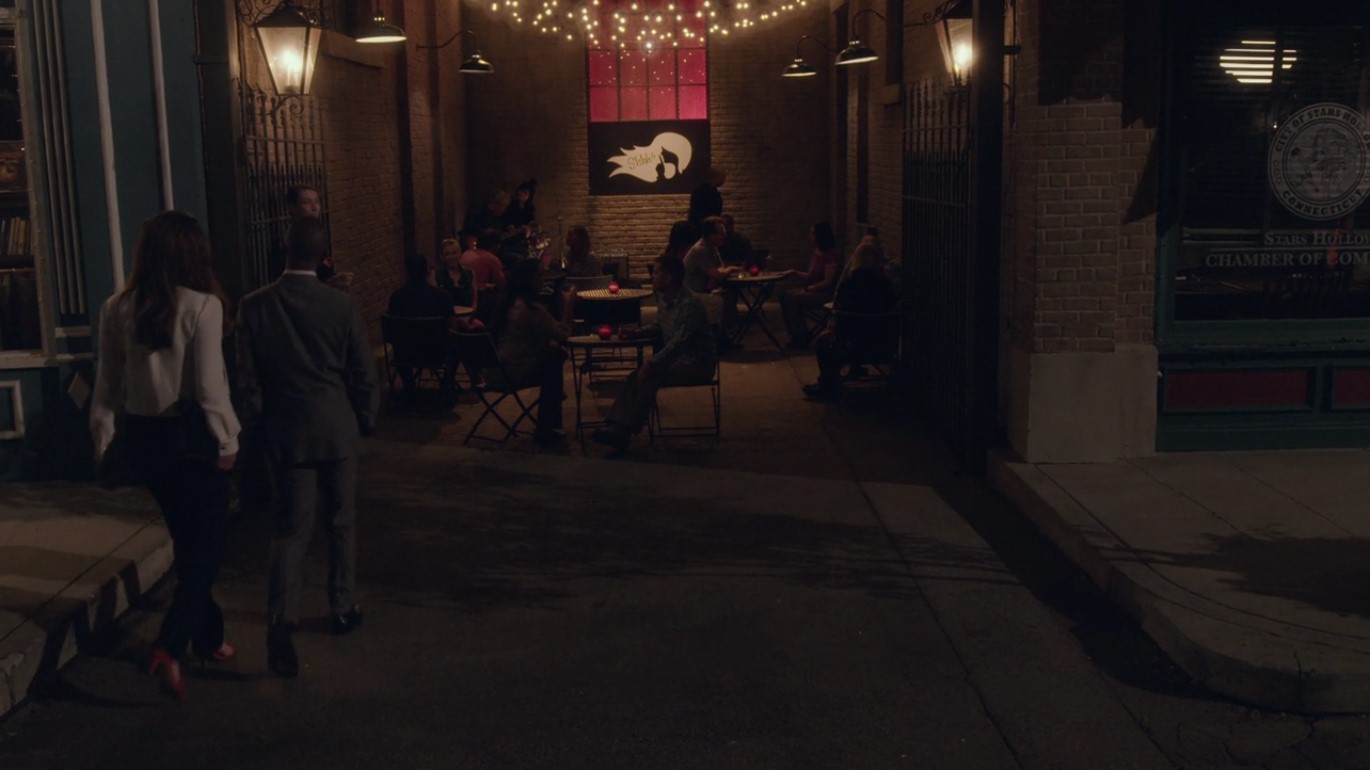 The Stars Hollow plot lines that didn’t work were one-offs, such as the Mrs. Kim’s choir full of frightened Korean teenagers who flinched every time they heard a tambourine, or the offensive fat shaming that occurred while Lorelai and Rory lounged at the Stars Hollow Municipal pool in “Summer.” The worst plot line was the infamous  20-minute long “Stars Hollow Musical” Rehearsal, which served absolutely no purpose. After each number I let out a sigh of relief that it was finally over, only to be greeted by a new song! But the thing is, that was only the rehearsal and there wasn’t even any follow-up. Did anyone come to the play? Did it actually happen? I do not remember this being addressed which makes the long ass time I spent watching the musical even more pointless. 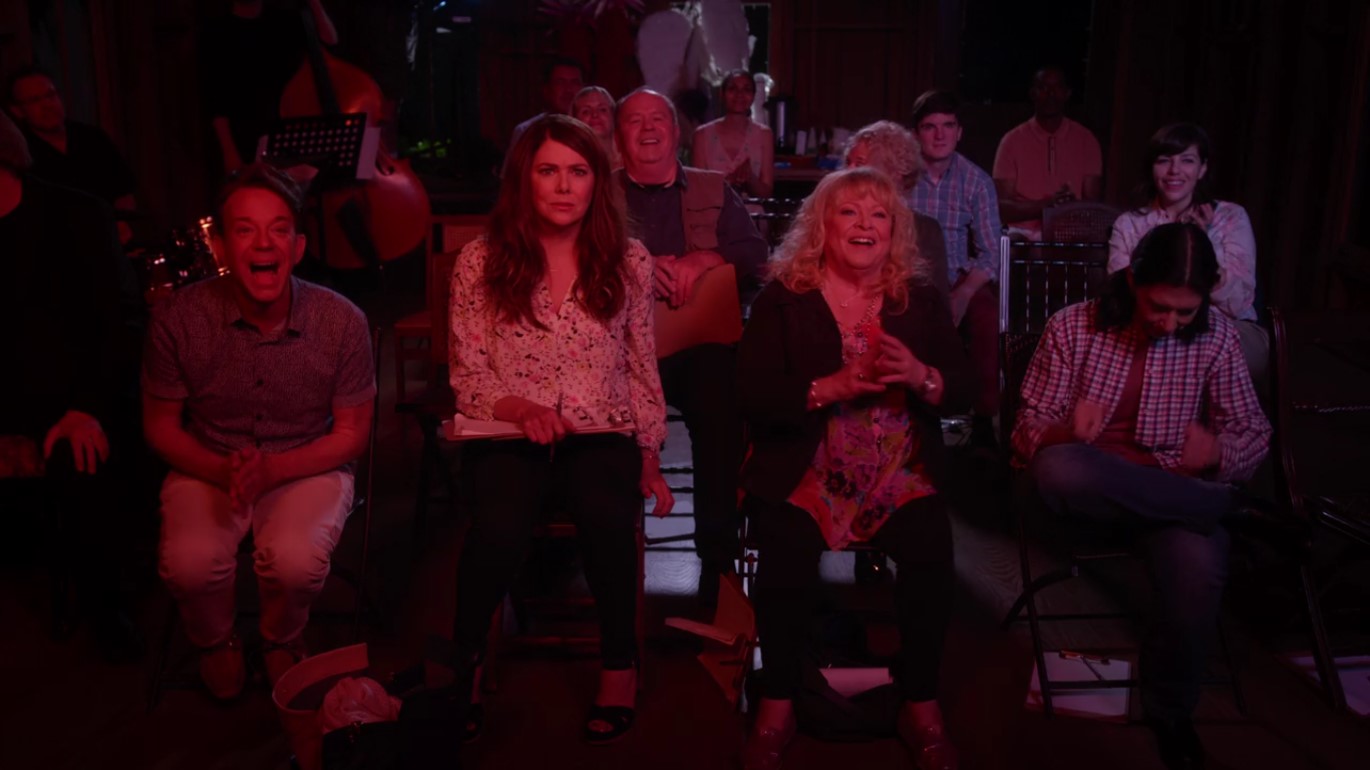 The worst part about Gilmore Girls: A Year in the Life focusing on the eccentric aspects of characters is that it left little room for what I consider the most important part of the show: the relationships. At it’s heart, Gilmore Girls was a show about relationships. The relationship between Lorelai and Rory; Lorelai and Emily Gilmore; Luke and Lorelai. And I was sad that the show felt that it had to pack in so much fluff, like a guest appearance by Rachael Ray (but like really WHY DID YOU DO THAT, GILMORE GIRLS? WHY?), and a cringe-inducing Life and Death Brigade segment, instead of focusing on what made this show work.

For me, the part of Gilmore Girls: A Year in the Life  that shined the brightest was everything Emily. More than anything, this revival humanized Emily in a way that the original series never did as she tried to navigate her life without Richard. Emily was the star of this series partly because relationships were at the center of all of her story lines. For one of the first times, we got a little more insight into Emily’s side of her relationship with her daughter. One of my favorite scenes is when Lorelai and Emily are sitting in group therapy in silence, and the scene cut to the two of them hysterically laughing at a story Lorelai is recounting from her childhood. I don’t think we have ever seen Lorelai and Emily ever truly laugh like that together, and genuinely bring that much joy to one another. It was hard not to watch that scene and smile even though a second later they are sitting in dead silence not knowing what to talk about next. The series also delved into Emily’s relationship with the women of the DAR and her growing affection for her maid and her extensive family to the point where she considers them family. 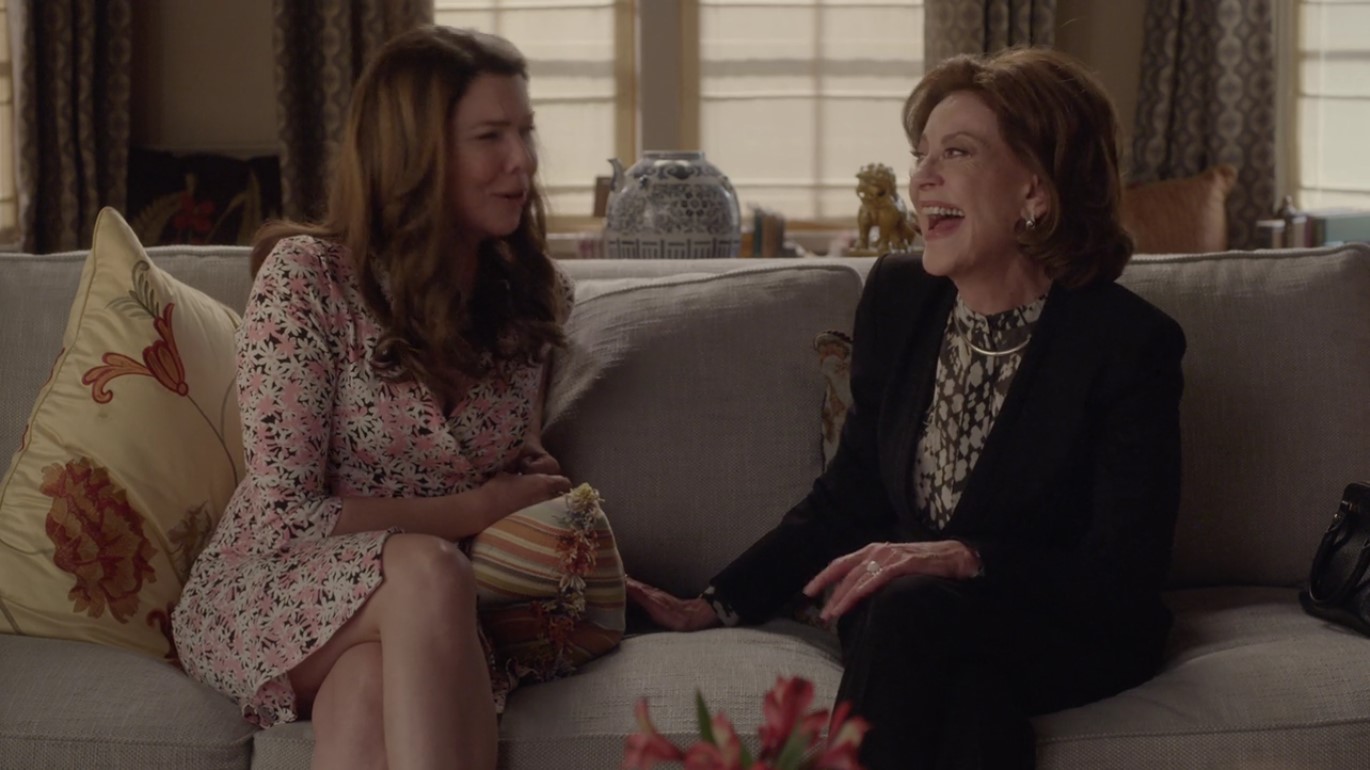 The best relationship portrayed in the limited series was Emily’s relationship with herself via her grief for Richard. At first, Emily questioned who she was without her husband. What was her new identity? She didn’t know if she really liked the things she thought she liked which resulted in her–wait for it–putting on a pair of Lorelai’s jeans (the horror!). But as the seasons passed, Emily started to discover who she was and what she wanted, and found her happy ending living in Nantucket as a Whale Hunting Museum docent. But don’t you worry, Emily still got cursed by that Writing Room Confetti Cannon through the “Let’s Franchise Luke’s Diner” story line. 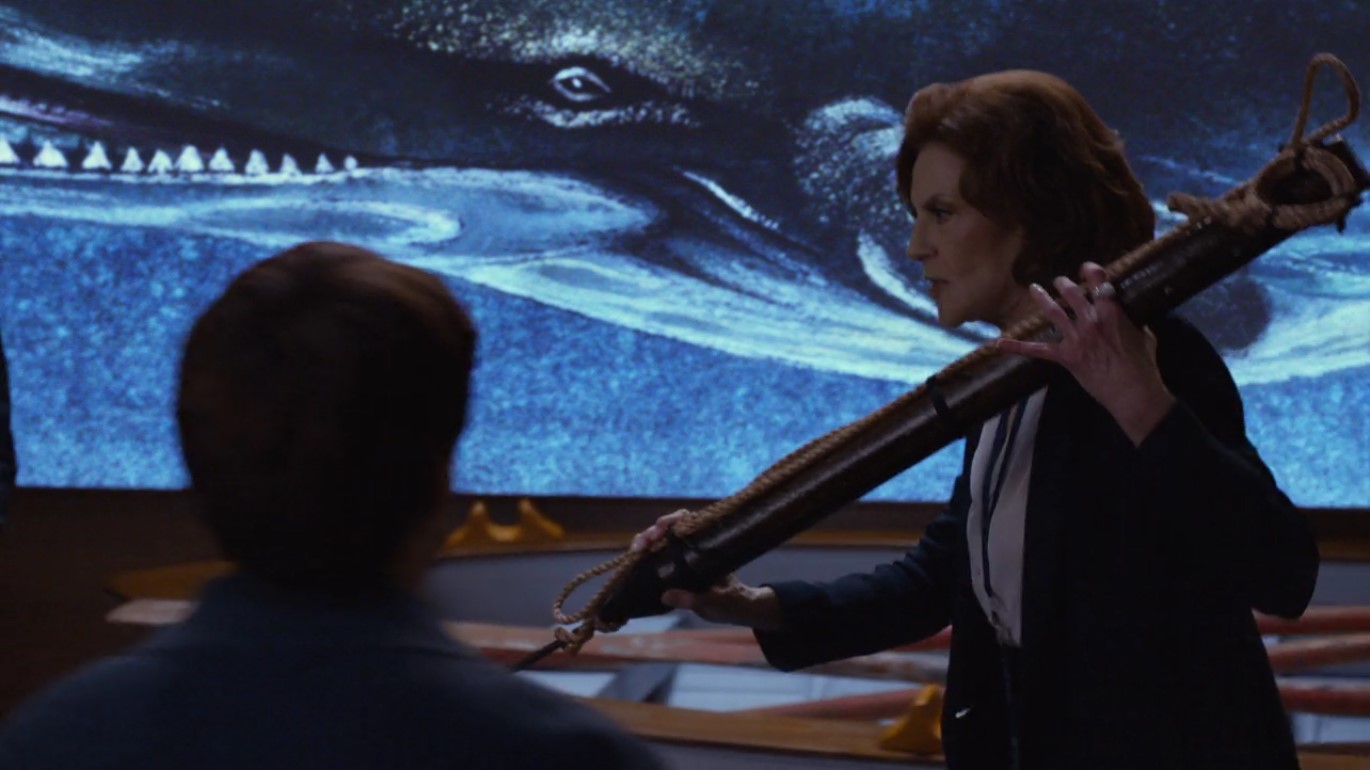 In the end, I almost feels like “Stars Hollow The Musical” is representative of Gilmore Girls: A Year in the Life as a whole.  The show runners are Taylor Doose, throwing every exciting idea that pops into their minds into the show without considering the outcome as a whole. Everyone involved in creating the show are the musical advisory committee who think that the production is going to be amazing because it is so over the top. And the rest of us, well, we are Lorelai with our mounds of clipboards screaming at the screen “NO, NOT ANOTHER TAP DANCING NUMBER.”

Alyssa (TV Editor) likes long walks on the beach, Greek food, talking about television, watching a good sunset, and girls who wear glasses. Wait, this isn't a bio for OKCupid? Alyssa got her start recapping in college when her friends got tired of her constantly talking about TV and suggested she start a blog. The idea was if she wrote about TV she would talk about it less. Well her friends succeeded in one of their goals...she started writing about TV.
@tvwithapb
Previous ‘Batman: The Telltale Series’- The Good, the Bad, and the Two-Faced in “City of Light”
Next Telltale’s ‘The Walking Dead Season 3: A New Frontier’ Review