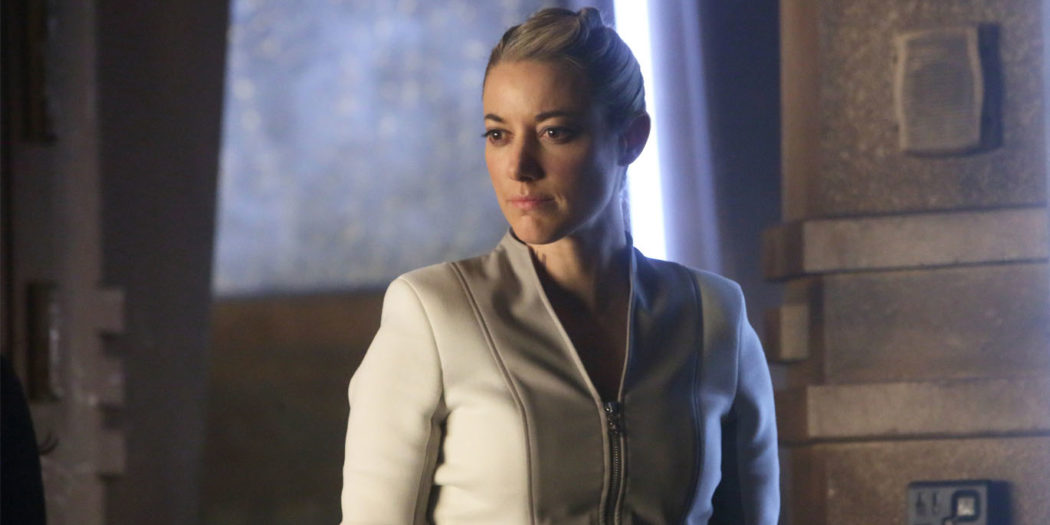 ‘Dark Matter’: Let’s Theorize About the Android Time Skips in “All the Time In the World”

This week on #DarkMatter: Three reenacts Groundhog’s Day and causes Android to time skip through the future. Let’s over-analyze everything! Wee!

Spoilers through Dark Matter 3×04: “All the Time in the World”

I went into “All the Time in the World” with low expectations. I was certain that a Groundhog’s Day theme, wherein Three tried and failed to convince the Raza crew of his temporal issue, would be an absolute filler episode with a handful of laughs and minimal story progression. And for the first half of the episode, it was entertaining enough with a lot of great character moments for my boo Three (he calls Five “Fiver”! He learned French!), but let’s discuss the most important part of the episode: Android’s time skips through the future.

Dark Matter is a show that rarely shows plot moments without reason. Things might not make sense early on in the season or they may frustrate us (Nyx’s death), but they have purpose, and I think the quick glimpses into Android’s future can tell us a lot about what’s in store for Dark Matter and the crew of the Raza.

As always, this is over-analyzing at its highest form. But hey, I was right about Ryo last season, so let’s see if I can keep it going. 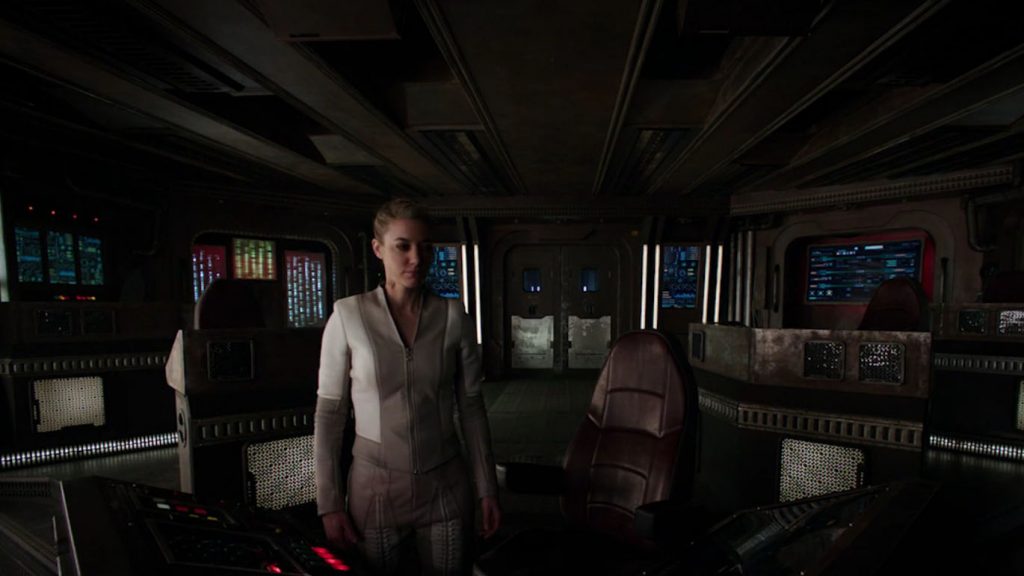 The first of Android’s skips is the most confusing. Android stands at the bridge watching security footage of Two in a cargo hold. She seems like she’s looking for something, possibly the Android, which seems all the more plausible when Three walks onto the bridge and shoots Android. But why?

There could be several reasons: maybe the Android’s time skips caused her to leave completely and Three used that paralysis gun to hook her to that current time without another jump. Maybe Android’s programming went haywire or she was given a virus and they had to subdue her somehow. Maybe Android inadvertently betrayed the crew because of her connection to the Android Liberation Front.

All I know is, there’s a bond between Three and the Android, there’s a sweetness to them when no one is looking. He’s fiercely protective of her, so if he shoots her, I don’t think he shoots to kill, only to protect the rest of the crew.

One more thing of note: it seems that when the Android “jumps” she has no knowledge of the world around her. Her body continues to go through the motions in the future, but past Android only sees these glimpses. 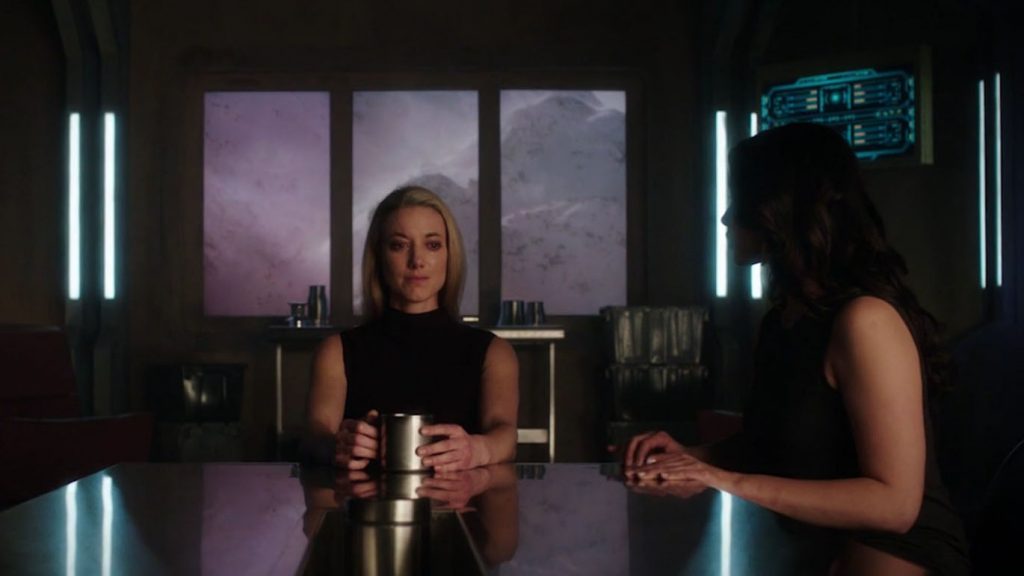 We’ve seen little emotion from the Android over the last 24 episodes. We know that she feels more than the average android but she still keeps things robotic for the most part (and it’s thus robotic naiveté that makes her so endearing). However, in the time skip forward, she’s outwardly weeping; she’s grieving over someone’s death as Two comforts her. It can’t be Five since we see her in a later jump and I don’t think Two would be so stoic if Three were to die, so I actually think the death she’s mourning is Victor from the Free Android Movement.

Two: “You’re crying. It’s an expression of sadness. In this case, grief.”

Last season, Android spent a significant amount of time with Victor, even going so far as to living in a fantasy world with him for a time. She has feelings for him and since I’m sure she meets up with the FAM later on, it only makes sense that their bond would grow as time passes.

It’s possible it might not even be his death that elicits such emotions from Android, but I think it’s safe to say that outside of Five, Victor is really the only option. And I believe that his death would be the catalyst for the next time skip in Android’s future. 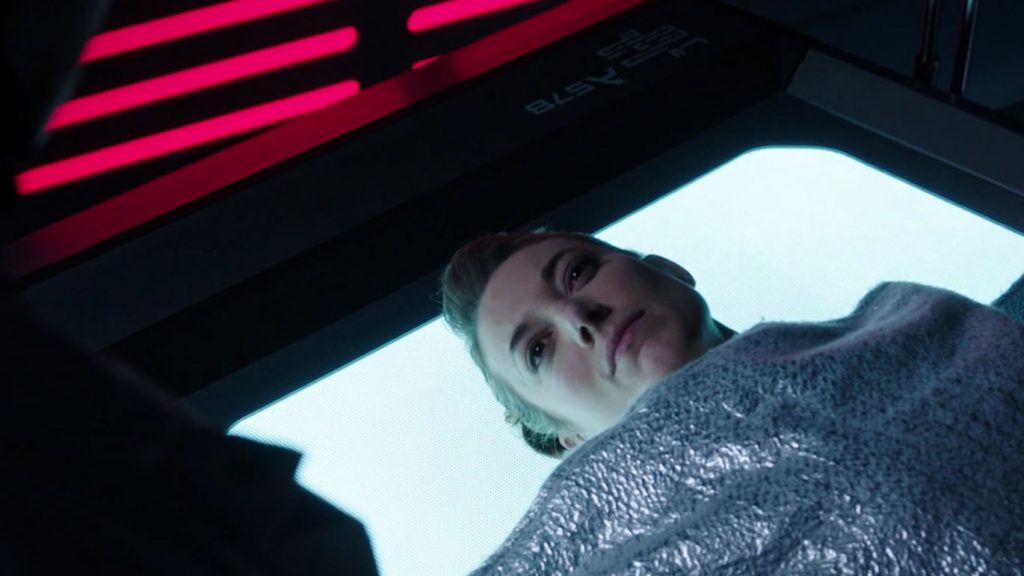 Cut Up and Tied Down

This time skip might be the most important because it tells us so much about the state of the corporations at that time. Android is being held in an Electus Corp research facility. Electus Corp, if you recall, was the corporation that held Nyx, her brother, and the rest of the Seers captive in an attempt to see if their collective consciousness could predict the future. In short, they aren’t great people. Also of note is that the Galactic Authority manages to capture the Android (and I assume the rest of the crew?) and turns her over to Electus because of their “mutually beneficial relationship.” Is this a long-standing arrangement between the two groups or is it a more recent one because of the looming corporate war caused by the destruction of Eos-7? It’s hard to guess at the moment, but at least we know that the corporations aren’t above forming alliances.

The scientist then asks Android about the Android Liberation Front, presumably the same group spear-headed by Victor and she plays dumb about her involvement with them. At some point she helps the group “engage in terrorist acts”, which might be a reason why the GA is after her in particular. The scientist then holds up her illegal tech that allows her to pass as human and she knows she’s caught. The screen pans out and it shows that she’s been cut apart at the joints. They’re studying her for “science.” 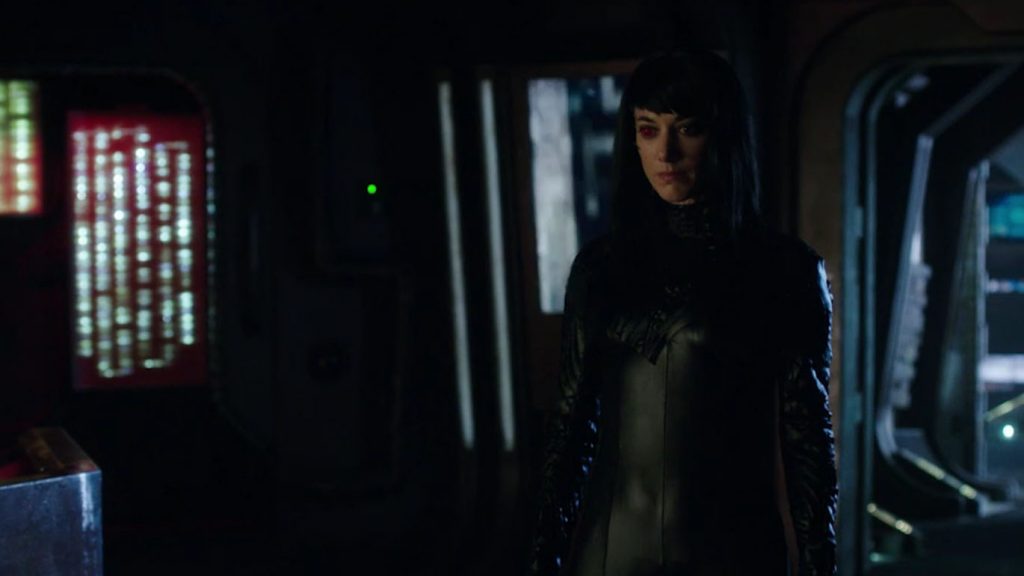 The best part of this time skip is that we now know that Five lives to be grey and old, so let’s rejoice because if anything happens to my baby girl, I riot. Five, now the only surviving member of the Raza, tells Android that the others are “gone”, which seems about right for how things have gone so far on Dark Matter. At the end of time, as Five calls it, Android notices that there are fewer stars, which leads me to believe that either Five is trapped there or she’s in hiding.

Their deaths, however, weren’t in vain, as it seems that the Raza crew succeeded in saving the galaxy from corporate warfare and the Ishida empire. It’s a bittersweet moment to know our heroes have “won” but I also imagine it’s a moment that Android will keep tucked away close to her heart. The crew of the Raza means everything to her and she’s already proven that she doesn’t care about outsiders as long as the crew is safe. Knowing they die (but not when) may put a strain on her and even though Five cautions against changing the future to save them, Android may remember those names and keep a closer eye on her friends. Also, the scene was a reminder that no one on the Raza is safe. One, Nyx, and Devon aren’t anomalies in their deaths. And that breaks my heart.

What are your thoughts? Am I just blowing smoke with these theories or could we see some of these scenes play out in the future? Let me know in the comments.

Don't let the fancy nerd duds deceive you; Jen’s never been described as “classy.” You can find her on Twitter where she stalks all of her favorite celebrities: @jenstayrook. Or you can find her on Steam or Xbox dying in every game she plays as "Rilna." Email: jen.stayrook@theworkprint.com
@jenstayrook
Previous ‘Playing House’ Season 3 Premiere Review: Cookie Jars and Businesses
Next Nintendo Announces SNES Classic, Releasing Sept. 29