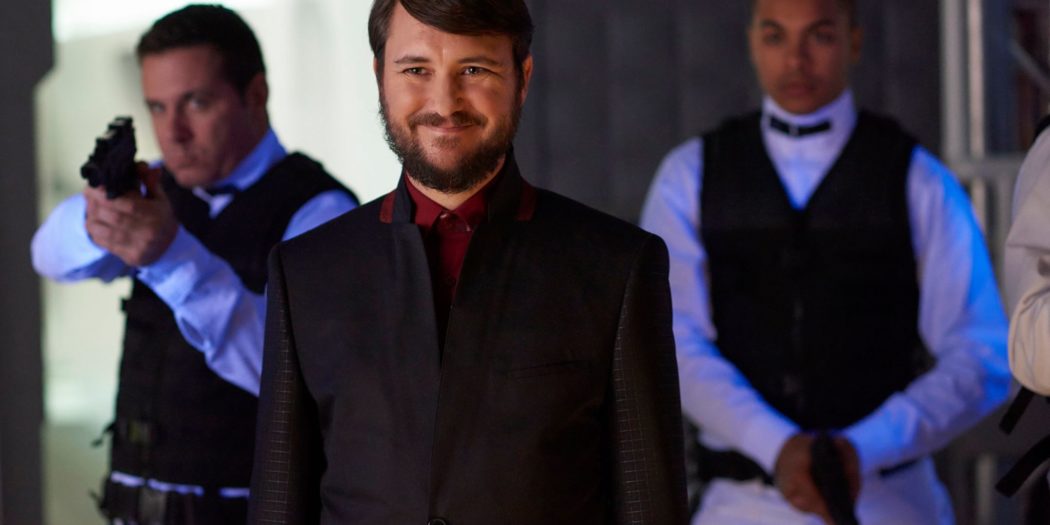 ‘Dark Matter’: It’s the Return of Wil Wheaton in “Going Out Fighting”

This week on ‘Dark Matter’: Two needs an upgrade from Dwarfstar Technologies; there’s some romance on the ship; Wil Wheaton returns to twirl his mustache.

After Dark Matter’s cliffhanger ending last week, we DON’T start this episode with Two waking up and everything being perfectly fine because the showrunners are giant teases. I’ve become kind of attached to Two for the sake of Five, so I need her to be okay. I guess the next episode could be titled “Nyx Is The New Two” and I’d probably be okay with that, but really, I just adore Melissa O’Neill. I’ve said before that she does the best job at interpreting the many different roles Two plays, so I’d be sad to see her go.

BUT before we get into the nitty-gritty, life-and-death situation, we have news coming in from aboard the Raza:

Nyx and Four Hooked Up.

Sure, we all saw that coming from, well, outer space, but STILL. Four shows off some of his classic Four emotions and Nyx tries hard to play it cool, but they both fail as Three smells the stench of shame and teases them for it.

Three: “Wow, you two were really going at it last night.”
*awkward silence as shame fills the room*
Nyx: “Yea, bowstaves and swords”
Three: “You guys moved up to grappling?”

I like this move because I like Four and I like Nyx and I think they work well off each other. That being said, I think this romance might take a hit when Four ultimately decides to go back to Zairon. (Yep, still sticking to that story. There’s gotta be a reason Milo spoke to Four so much.) Later on the Marauder, Four confides to Six that he wishes he could help his home planet, but without his memories he has nothing to offer his people. However, I don’t buy that he’s truly as loyal as he says.

A Critical Stage of Failure

After Five finds Two on the floor of his room, the Android tells Two that her nanites are in a critical stage of failure and she’s dying. We know from last season and the flashback in the episode’s recap that this is true because Alexander Rook says so. The crew decides it’s a no-brainer that they pull a heist on the most technologically advanced research facility in the universe because it’s Two’s life at stake. And damn if my little heart didn’t explode with happiness. Every single crew member is ready to lay down their lives for Two and you know what? For all the complaints about a lack of character development, these moments on Dark Matter get to me. Of course I want the development, too, but this is definitely an “all for one” kind of crew. I. LOVE. THAT.

Even the Android gets in on the love-fest:

Two: “You’re trying to distract me from what’s going on down on that planet.”
Android: “That would be atypical behavior for an Android.”
Two: “But perfectly normal behavior for a friend.”

Two, however, isn’t a fan of letting her crew do all the dirty work, especially when it’s her issue that puts them into a dangerous situation. She begs the Android to give her some kind of a solution to be useful and Fairy Godmother Android gives Two 24 hours to enjoy the ball at Dwarfstar Technologies.

Technology In The Dark Matter Universe

One of the reasons I love the sci-fi genre is because I’m fascinated by the technologies it’s creators manage to think up. Nanites, space elevators that put the Space Needle to shame, transfer transits, and blink drives are all really cool bits of technology in the world of Dark Matter. 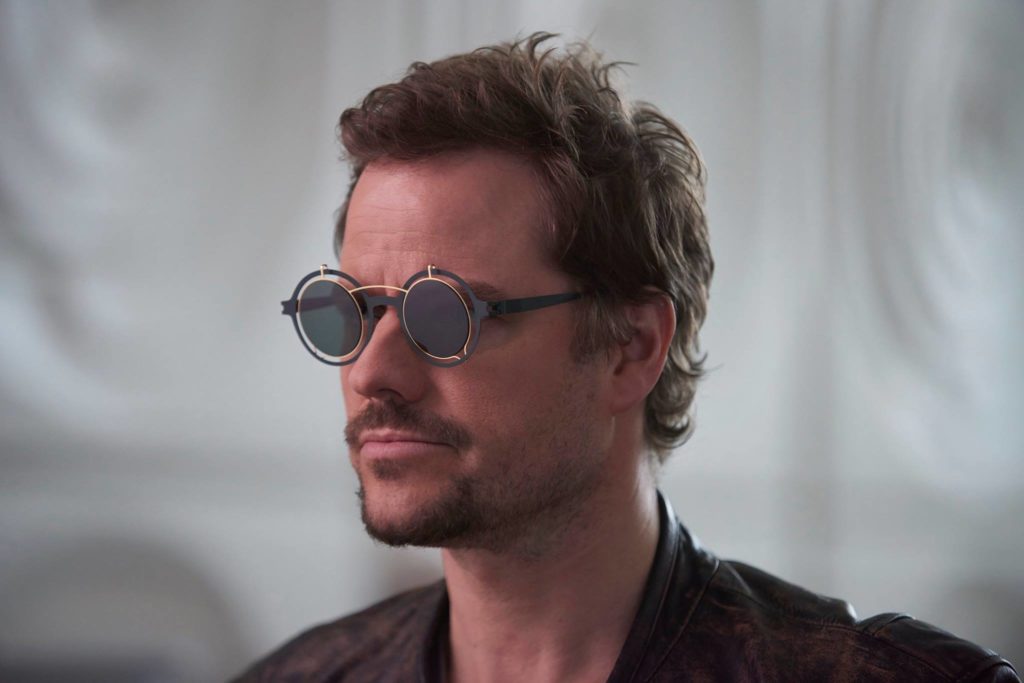 Three, what in the ever-loving hell is on your face? Are you trying to tell me those were least conspicuous pair you could find at the Sunglass Hut? You look like your villain name would be Doctor Incognito.

As the crew plans their journey into Dwarfstar, they meet Eric Waver, a junior scientist who became close with Rebecca in the early stages of her development. They learn that during her bloody escape of the space station, she spared Waver’s life. He tells the crew that Dwarfstar has improved her nanites it’s GO TIME. They borrow some retina scans from Eric’s unsuspecting coworkers and make their way into the research facility.

Alexander Rook the Party Pooper shows up to make a mess of things with his hair cut and mustache-twirling skills. Three and Six are imprisoned before they can escape with the improved nanites while Eric is sadly killed off-screen. 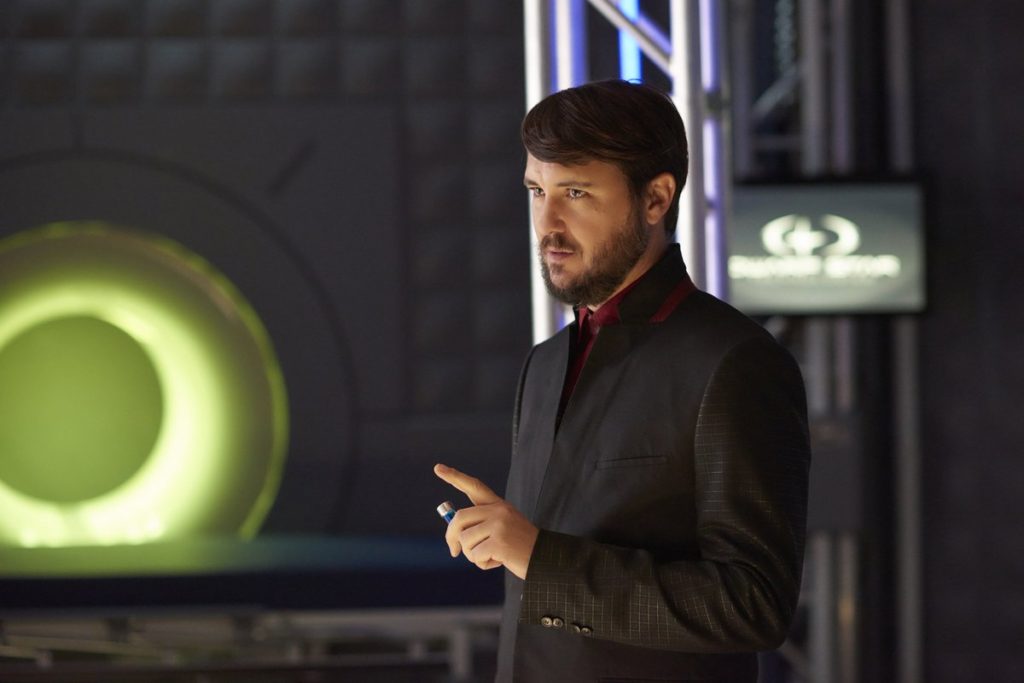 Android realizes they can adapt the blink drive to the Marauder and blink into the space station. WHY DIDN’T YOU THINK OF THIS SOONER ANDROID?

Inside Dwarfstar, Two runs into Rook and he shows off his gadgets. Unlike all the other antagonists on this show, he’s slimy and evil. “Would you like to meet the new you?” A door then opens in the wall like this a house of horrors and out pops Steroid Devon intent on killing Two. Like the villain that he is, Rook monologues a bit and then leaves before making sure the job is done.

Nyx comes to Two’s rescue and eventually Four shows up and puts like fifteen bullets in his over-muscled head. Two passes out, presumably dead, but Six is quick on his feet and draws blood from dead Steroid Devon to save Two’s life.

Three and the Fisherman’s Wife

The crew heads back to the Raza, but not all is well with Three after his time alone with Rook’s tentacle experiments. He’s infected with a space virus from visiting some questionable stations. The virus compels him to muck with the FTL drive but Six is on his A-game tonight and warns Two just in time to capture him. They blast the space monster into the atmosphere and then lecture Three about safe internet browsing.

OH THREE YOU BIG SOFTIE. YOU LOVE EVERYONE AND WE KNOW IT.

In an episode filled to the brim with tense moments, Five and Android share the tensest moment of the episode over a cup of hot cocoa:

Android: “Hot chocolate. Did you know that I possess over 20 million taste receptors?”
Five: “Do you want a sip–”
Android: “OKAY.”

These little moments are what I want from Dark Matter and a show that focuses on an ensemble cast. The bond between these characters carries the show. Then they talk about Five being worried about Two:

Android: “You’re worried?”
Five: “Of course I’m worried. In the past she’s been almost invincible. I mean, I saw her come back from the dead that time she was blasted out the airlock but that was because of her nanites. Now, instead of saving her, they’re going to kill her.”
Android: “No they won’t. She won’t let that happen. What makes Two special isn’t her nanites. It’s her strength of will. Her ability to face adversity and never give up.”

Then Android STEALS the hot chocolate, tells Five that Two will be fine and then looks like she totally doesn’t believe a damn word of what she just said. LOOK WHO IS HUMAN NOW.

Thankfully, Two is safe and sound. For now.

I doubt this is the last time we see Rook. He’s too much of a threat to be left alive. Two wants answers and he’s the one who can give them to her.

Speaking of Rook, does anyone think that the alternate universe actually a vision of the future? Two blowing up Dwarf Star, Four being emperor, the Raza causing the war between corporations all seem like they could plausibly come to fruition by the end of the season.

Android loves everyone it’s adorable, but that ending: is she totally crushing on Three? Was she on her charging pad dreaming of a time with Three? (That’s my theory and I’m sticking to it.)

Don't let the fancy nerd duds deceive you; Jen’s never been described as “classy.” You can find her on Twitter where she stalks all of her favorite celebrities: @jenstayrook. Or you can find her on Steam or Xbox dying in every game she plays as "Rilna." Email: jen.stayrook@theworkprint.com
@jenstayrook
Previous ‘Killjoys’ Review: We Say Goodbye To [SPOILER]
Next In Preparation for the ‘Dead of Summer’ Season Finale: A List of Questions