I think this should be obvious but just in case, he’s the one bedazzled in red, white, and blue. You know, like America.

Born Steve Rogers, Captain America was originally a skinny little nobody. With the ferocity (and size) of a chihuahua, Steve repeatedly tried to join the war efforts during World War II, but unsurprisingly was turned down because of his size. Seeing Steve’s tenacity and need to save others, Dr. Abraham Erskine recruited Steve into the Strategic Scientific Reserve. Long story short, Steve was injected a serum of Dr. Erskine’s creation and then dosed by Howard Stark’s (yep, that smarmy dude’s dad) vita-rays and voila! He became all big and bad. (Or a “super-soldier” as they say.) With the help of Peggy Carter and the Howling Commandos, Captain America fought Red Skull and his terrorist friends at Hydra, who wanted to take away freedom and ice cream. Eventually, Cap foils their anti-dairy plot and removes the powerful Tesseract from Red Skull’s hands, but has to go down with the ship, miraculously landing in the Arctic where he was frozen for 70 years. At the end of First Avenger, Steve is in modern day New York city.

Okay, cool. Zero to hero, saved the world from nazis, blah blah, got it. What next?

In The Avengers, Captain America reluctantly joins S.H.I.E.L.D. with the likes of Iron Man, Hulk, Thor, Black Widow, and Hawkeye–basically all those people we’re trying to cover to give you a head start. Things go awry, the Avengers can’t get along, and Loki (the dude with the horns) releases an army of Chitauri (aliens) on New York City. After nearly leveling the city to the ground (the Avengers are more destructive than the bad guys), the group is victorious and later eat at a shawarma restaurant. Good times had by all. Well, except the people who actually lived in NYC at the time.

Alright, saved the world from aliens and fights for truth, justice, and all that jazz. Anything else?

In Captain America: The Winter Soldier, Cap is still skeptical of his relationship with S.H.I.E.L.D. because of 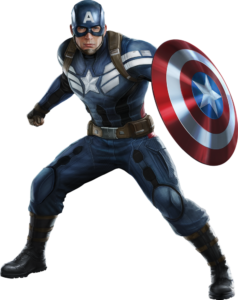 their secrets, and secrets get people killed. In a shocking turn of events that is not at all foreshadowed by Cap’s earlier judgment of the agency, S.H.I.E.L.D. gets fooled by Hydra’s long con and is infiltrated, leaving Cap, Black Widow, Nick Fury, and newbie Falcon to weed out the bad guys and stop them from using the fancy new helicarriers to kill millions of people. New to the game is the Winter Soldier, a creepy-looking guy with a robotic arm, and the only person able to stop Cap’s shield. All of this is orchestrated by Arnim Zola, a scientist who worked for Red Skull back in Cap’s original time. A few smashed computers and broken wings later, Cap and Co. stop the helicarriers from all that murderin’ and Cap yet again goes down with the ship. He is saved by the Winter Soldier who is actually his thought-to-be-dead best friend, Bucky Barnes.

What’s in store for Cap in Age of Ultron and beyond?

Tony Stark and Steve Rogers don’t exactly have the most touchy-feely relationship of the bunch. They argue as much as humanly possible and this will have consequences. Cap, as we saw in Winter Soldier wants transparency and Iron Man just wants to keep the world safe, by any means necessary. The latter’s ideals are what creates Ultron, throwing the world into chaos. After that, Tony and Steve just aren’t the same, which leads us to Civil, civil war, y’all. It isn’t known yet what plot Civil War will follow, if it will be solely about the events from Age of Ultron or if more of the politics from the comics will come into play. Either way, Captain America and Iron Man are gonna throw down.

Red Skull: Gruesome WWII baddie who tries to the steal the Tesseract and use it’s powers to recreate the world into one of his liking. He fails.

Dr. Abraham Erskine: Started the whole she-bang with Steve, recruiting him into the SSR, and creating the super-serum.

Howard Stark: Tony’s daddy and creator the vita-rays that turned Steve into Cap.

Arnim Zola: Weasel of a scientist who serves Hydra and is responsible for the infiltration of S.H.I.E.L.D.’s security in Winter Soldier.

Bucky Barnes: BFF turned mechanized enemy. He’s not really a bad guy, even though he kills a lot of people.

Sam Wilson (Falcon): Slow runner, uses Red Bull to give himself wings, and is loyal to Cap. See in Winter Soldier.

Want more than movies to sate your Captain needs? Check out these comics:

Captain America: Man Out of Time

Captain America vs. The Red Skull

Or just stare at this gif:

@theworkprint
Follow
Previous articleFirst Look: Marvel’s ‘AKA Jessica Jones’
Next articleDancing With the Stars Review: Disney Night Brings out the Weird in Many