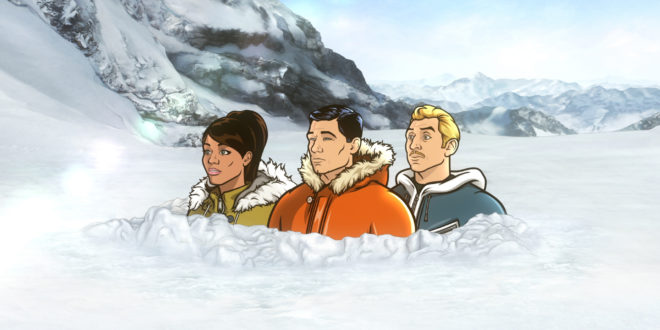 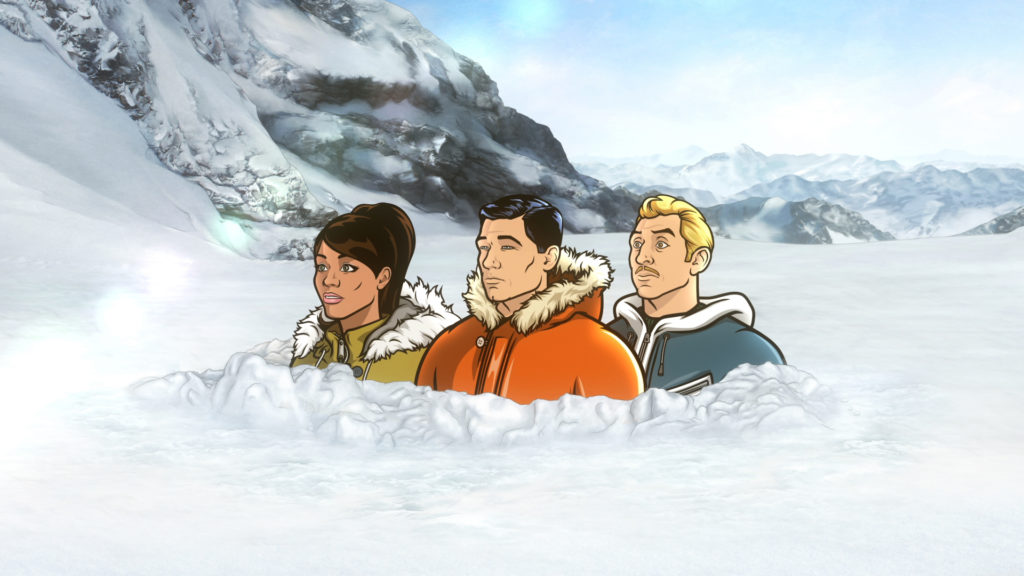 For a show as heavily serialized and long-lived as Archer, the burden of keeping the show engaging weighs more heavily on the comedy and character development. This is most apparent whenever the show ventures into the standalone “mission of the week” diversions, which without any major plot or character development, can sometimes feel like it’s just spinning its wheels. This is largely the case with “The Archer Sanction,” which manages a good number of laughs but mostly felt like a diversion.

Archer, Lana, and Ray are sent on a climbing expedition in the Swiss Alps to eliminate another assassin (or, as Archer prefers to call it, an “extra-judicial killing”), but Archer of course skimmed the mission dossier and only remembers that the target is from a country which was an Axis Power during World War II. Leading the expedition is Patrick “Crash” McKaren (voiced by Rob Huebel), a rugged mountaineer with which both Lana and Ray are smitten, which in turn makes Archer jealous. Rounding out the climbing party is a shady trio whose members, of course, each come from Germany, Italy, and Japan.

While the three spies are busy flirting, bickering, and trying to figure out who the target is, the office drones throw Cheryl a birthday party in their secret japanese sauna. Malory is watching wee baby AJ, but is unreachable to the increasingly worried Lana. It’s always great to see the drones fumbling with a mission of their own, and they’re eventually tasked with investigating Malory’s apartment to check on her and AJ (only to find out too late that it was being fumigated). There are plenty of amusing moments here, from the elaborate voicemail prank Malory finally pulls on Archer to Cheryl’s perpetual and wide-ranging ignorance: she doesn’t know that what ceviche is, or that watermelons are red.

At times, it feels as though Archer tries a little too hard to stick to the old formula. Though I would never complain about the reappearance of the show’s countless long-running gags, the rest of the episode was straightforward and unfolds in a predictably Archer sort of way. The three shifty-looking party members are soon found dead under suspicious circumstances, and it doesn’t take long for Archer to figure out that Crash was the real assassin with the mistaken belief that Ireland was an Axis power (they were neutral, and Crash is actually a Canadian of Scots-Irish descent). Archer shoots him despite being warned against setting off an avalanche and, in a surprising turn of events, sets off an avalanche that quickly sweeps the mountainside. They survive, of course.

Archer himself is acutely aware of, and consistently amused by, his role as the hero and the invulnerability that implies. His flippant attitude and complete disregard for his own safety has reached new heights this season, and the self-aware humor is being laid on pretty thick (particularly in the premiere). Not taking everything seriously is an integral part of what makes Archer and Archer so great, but the show can’t really afford to simply stick to the old formula and keep dismissing the lack of real stakes with a wink and a nudge.

What We Do In The Shadows episode 2.07 Recap – The Cat In The Scat